5 Dividend Stocks That Drenched Investors in Cash This Year

Dividend growth is the secret to a comfortable retirement. Today, we’re going to discuss five stocks with big “payout momentum” heading into 2020. As dividends grow, stock prices, are likely to follow, so pay attention.

How do I know? The dividend-growth strategy in my Hidden Yields research service has resulted in 17%-plus annual returns since inception. Do the math, and that means subscribers have roughly doubled their money every four years.

Yet, for whatever reason, massive dividend increases throughout the year go virtually uncovered. The company puts out a press release, typically alongside earnings. Even the biggest payout hikes of the year get just one or two sentences in a writeup before reporters move on to sexier topics.

Investors who pay close attention, however, are rewarded in the months and years ahead—not just in bigger dividend checks, but growth as investors get wise to the story that’s fueling these hikes. That’s why today, I’m going to put the spotlight on five jumbo-sized dividend raises from the past year—gaudy 41%, 50%, even 56% ramps that could signal big returns in the year to come.

Consider the performance of a couple of blue chips that have turned up the heat on their dividends.

Starbucks (SBUX), for instance, has kept the pedal down on its dividend ever since initiating the payout in 2010. While the stock went through a lull from 2015-17, another generous raise (of 20%) announced in June 2018 lit a fire under SBUX shares that have them tripling the market since then.

Starbucks Gets a Caffeine Jolt Since Its Monster 2018 Hike 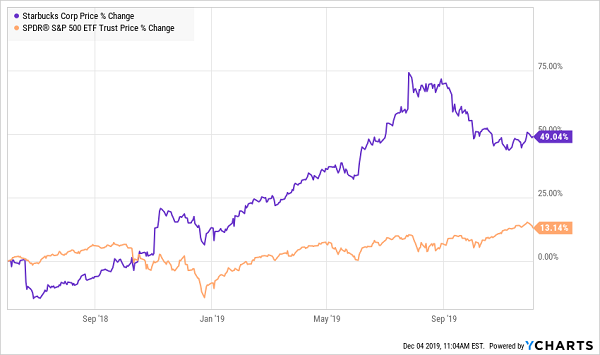 Or consider UnitedHealth Group (UNH), which has pumped up its payouts by 20% annually for the past three years. Despite being in a maddening health-insurance industry that’s plagued by regulatory uncertainty, UNH’s robust dividend increases have telegraphed to investors that things are running smoothly at the nation’s largest health insurer. 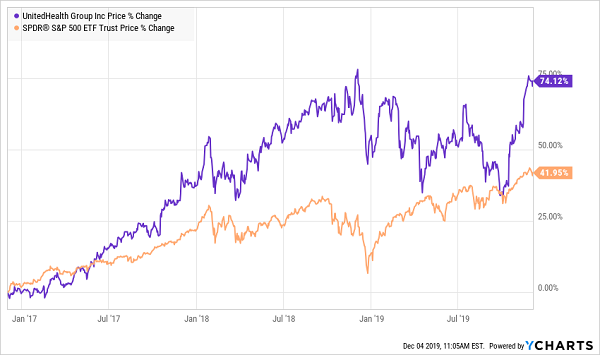 The five stocks I want to show you today have put Starbucks and UnitedHealth’s 2018 raises to shame. These companies have upped the ante by between 41% and 56% over the past 12 months—a pace that would see their dividends roughly double every two years, and that signals considerable total-return potential over the next year or two.

Wendy’s (WEN) has moved up a spot in its space over the past year, climbing from the nation’s eighth-largest fast-food chain to seventh as of the August 2019 QSR report, with 6,711 units across America.

Its additional locations aren’t just empty calories. They’re driving performance. The company’s third-quarter revenues grew 9% year-over-year, topping estimates. Profits beat the Street, too. More encouraging is that the company flipped its projections for a small decline in earnings this year to profit growth.

All this bodes well for income growth at Wendy’s, which only a few months ago I touted as one of four possible doublers because of its dividend dedication. It hasn’t let me down. It’s outperforming the market since then by 6 percentage points, and it recently announced its second dividend hike of 2019—a 20% bump to 12 cents per share. When you factor in its early-year bump, the payout is now 41% higher than it was at this time last year.

Wendy’s (WEN): This Is How It’s Supposed to Work 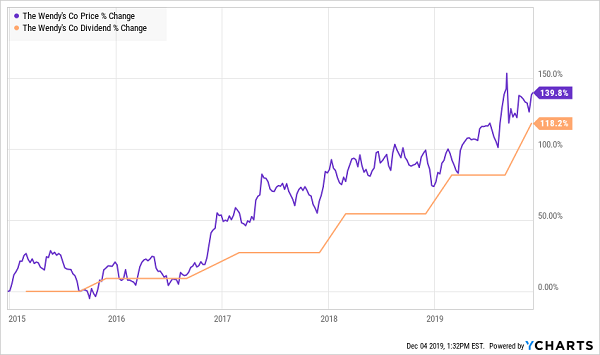 It’s been roughly a year since I highlighted yet another dividend grower: Booz Allen Hamilton (BAH), a management and IT tech consulting firm whose name you’ll see plastered across the D.C. metro area. 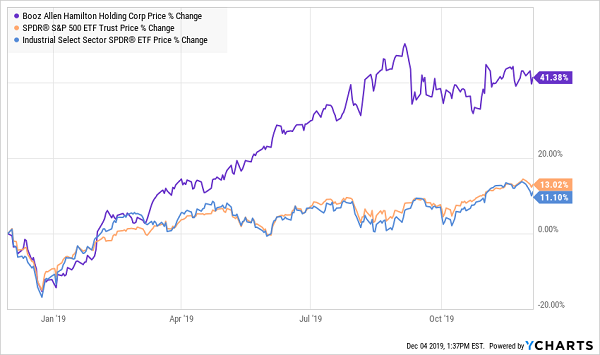 No surprise here. Robust dividend growth doesn’t come out of nowhere—the most aggressive dividend increases tend to come from businesses that are aggressively growing themselves.

BAH’s last quarter saw a 13% climb in revenues, and better still, a 23% improvement on the bottom line. Analysts are looking for double-digit annual profit growth this year and next.

Management is happy to share the wealth. Booz Allen Hamilton announced a 21% raise in the dividend in February, then doubled down with a 17% shot in the arm for its November payment—good for a total of 42%. That payout is now double what BAH was delivering at the end of 2015.

Any time you go out of town on vacation or to visit the family, take note of the credit unions and small regionals you drive by. You might not have heard of them, but chances are they’re among a broad swath of small bank stocks that have delivered eye-popping dividend growth this year.

Among these relative no-names is Capital City Bank Group (CCBG)—the small-cap company behind Florida-based Capital City Bank. This 124-year-old bank represents about $2.9 billion in assets, and operates across 57 branches in Florida, Georgia and Alabama.

There are no tricks, nothing that makes Capital City stand out operationally from its peers. You can open savings accounts there, get a credit card, take out a loan, the norm. But banks like these have swollen following the financial crisis, and they’re increasingly sharing their profits with shareholders. To wit, CCBG has gone from a $9.1 million profit in 2015 to $26.2 million in 2018 and $30.7 million over the trailing 12 months.

And its chart is exemplary for the potential opportunity for share upside as prices chase the dividend higher.

Capital City’s (CCBG) Stock Has Some Catching Up to Do 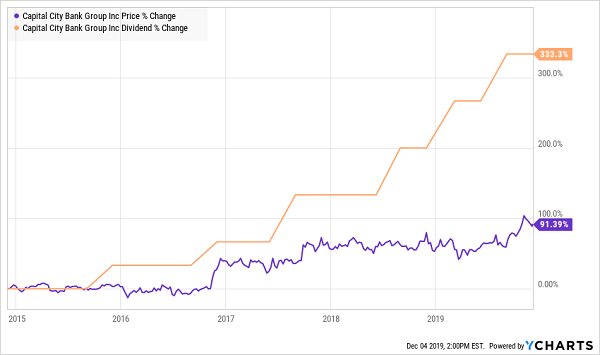 CCBG’s payout has more than quadrupled since late 2004, yet shares have “only” appreciated 91%. This stock has the makings of a potential powder keg—especially given a 44% improvement to the dividend across two hikes in 2019.

If that sounds bizarre to you, you’re not alone.

This is a company whose “highlights” of 2019’s first three quarters includes:

Those aren’t my words. It’s theirs. To the letter. What’s more, Dillard’s CEO William T. Dillard II actually said, “we were not satisfied with the third quarter.”

I won’t belabor the point here. Dillard’s is a struggling department store (redundant, I know) whose dividend growth isn’t even remotely reflecting its financial reality. Worse, despite a 40% share dive over the past half-decade—something that typically gins up a dividend yield—DDS shares offer a meager 0.8% at the moment. That’s not even enough to be called a “dividend trap.”

Dillard’s is just a dud that threw a mid-year haymaker. Move on.

Investment banking giant Goldman Sachs (GS), like many of the stocks on this list, spread its dividend love across two payout hikes this year. The first, a 6% teaser announced in April, was dwarfed by a 47% spike unleashed in July. With that, the payout has almost doubled since early 2017.

This is a much more rapid pace of dividend growth than Goldman has produced over the past few years, and it’s very clearly a case of the investment bank sharing the wealth. The company’s revenues and pre-tax earnings both climbed 12% between 2017 and 2018, hitting their highest levels since 2010. Profits of $25.27 per share were the highest since 2009. 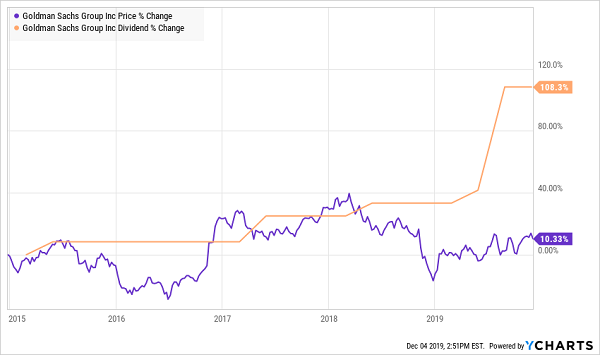 Goldman’s shares don’t even look like they’re trying to catch up, despite a few months passing since its latest increase. It could be that 2018 was a bumper year—indeed, 2019 is expected to come in under last year’s stellar numbers. But GS is a cyclical company that isn’t going to deliver steadily improving results year after year. What matters is the longer-term trend, and that’s decidedly in Goldman’s favor.

Shares trade at just 9 times estimates and a touch less than book. The yield is too thin for my blood, but if the market sees a flight to quality, investors will be running to Goldman Sachs.

Each of these stocks gets a few things right. They all provide the kind of rip-roaring dividend growth you need so your retirement income isn’t swallowed by inflation. A few are cheap. A couple others are under the radar.

But none of them are the total-package stocks you need to get your retirement house into order. And the time for getting that house into order is now, before you suffer yet another year of underperforming the market and collecting mediocre income checks.

Bull markets? They average 20% or more in total returns. Bear markets? About 12%—in gains, not losses. And yet, you never see these stocks touted on CNBC, Fox Business or any of the other major outlets.

But this seven-pack of undervalued, overlooked and often outright ignored stocks, like poor ol’ Stepan, can safeguard your portfolio from even some of the most dire recessionary scenarios. They can deliver 20% returns annually in bull markets… but even 12% annually in bear markets.

The risks are piling up as we near a contentious election year, as China keeps jerking us around on trade, and as the Federal Reserve refuses stay put on a course of action. The time to take action is now.

Double, maybe even triple, your retirement income in no time with these durable dividend stocks. Click here to learn more about these recession-proof “Hidden Yields,” including company names, stock tickers, buy-in prices and my in-depth business analysis— 100% risk- FREE.