Bear markets can be painful, but they also create “once-in-a-decade” buying opportunities for dividend investors. For example, there are four big names yielding between 9.9% and 15.9% that are literally the leaders in their respective industries. (We’ll review them shortly.)

I’ve complained for years that, if you had a million bucks to plunk down on blue chips and bonds, you’d only be able to wring out about $20,000 to $30,000 in dividends and interest each year. But right now, you can take a nest egg half that size, and generate anywhere between $49,500 to $79,500 annually in dividend cash.

Of course we need to prioritize payout safety, first and foremost. It’s no small feat today with this unprecedented level of economic disruption!

(That’s what my Dream Retirement Portfolio focuses on—buying secure yields and avoiding the shaky dividends. More on this in a moment, too.)

Wall Street often sniffs out dividend cuts before they happen. Let’s look at a couple of (the many!) S&P 500 stocks that have cut or suspended their dividends recently: Ford (F) and General Motors (GM).

Look at the charts below, which show Ford and GM from the bull-market peak through their respective dividend cuts. As soon as American investors really started digesting the idea that we were in for a fundamentally disastrous calamity, they began to dump these shaky dividends: 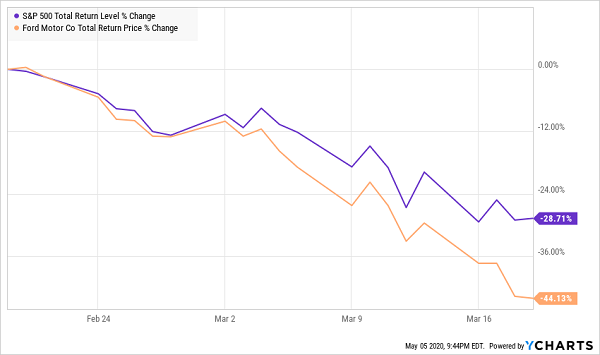 Still, as you can see, plenty of investors were willing to take a chance on both stocks on the way down, tempted by juicy yields that, ultimately, couldn’t last. When a household name like Ford pays 13%, it’s a sign that something is probably up: 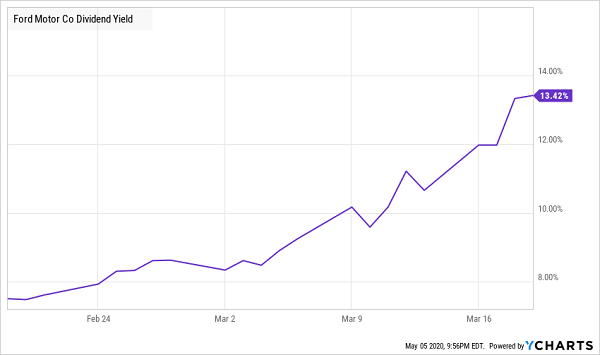 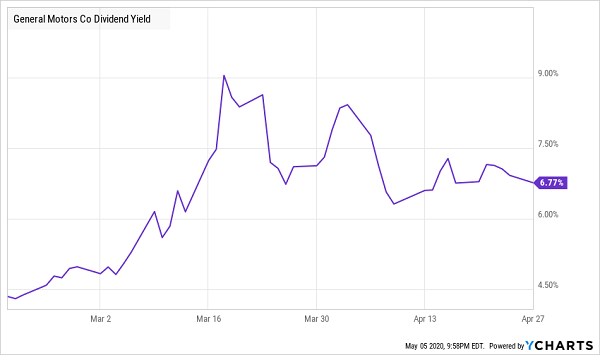 Right now, the market is offering up 9.9% to 15.9% yields on the 4-pack of stocks we’re about to explore. A couple of these firms are literally the best in their respective businesses. Problem is, as we’ll see in our first case, this already-struggling industry is now on life support.

It’s a tough business in good times, an impossible one today. We’ve seen the closures. We’ve heard about the J. Crew bankruptcy filing, plus the rumors swirling around Neiman Marcus, Lord & Taylor and J.C. Penney.

Brick-and-mortar retail is in as much peril as it has ever been. And even its best operators (Simon included) are going to feel the pain long after people are allowed back into malls.

Simon didn’t help itself by paying a relative king’s ransom for smaller Taubman Centers—it paid $3.6 billion, a whopping 51% premium, for a company whose stock had plunged 66% in the three years prior.

The REIT is arming itself to the teeth to get through the next year or so. In March, it announced it had amended and extended an existing $4 billion credit facility with a $6 billion revolver that gives it a total of $9.5 billion in credit capacity. It’s also playing things smart: About a week ago, it announced it would be reopening 49 of its malls, saying it would hand out free masks and sanitizer, as well as provide temperature testing on request.

But consider this: A WaPo-University of Maryland poll says 67% of Americans wouldn’t be comfortable shopping at a retail store, while 78% say the same about sit-down restaurants. In other words, while the government and businesses might be ready to reopen the economy, the majority of people aren’t—and we’re seeing similar limited economic activity in places such as China and Europe.

And every day people spend inside, the more they’re forming e-commerce habits—a longer-term issue for physical stores. And in many cases, the damage is already done, with many legacy retailers destined to shutter permanently, leaving Simon with more vacancies to fill.

Now Simon is the cream of the crop. But the playing field has been completely tilted against it. This isn’t a stock you want anchoring your retirement portfolio for the next 10 years. 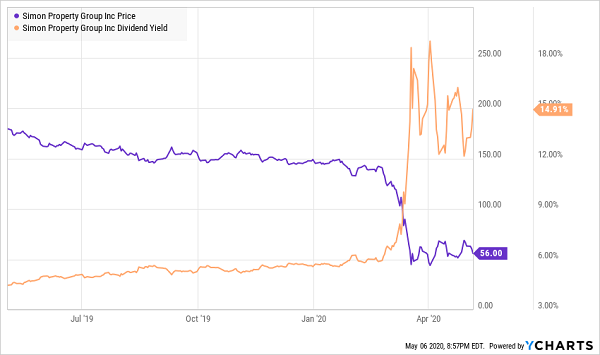 America isn’t alone. Stock markets across the world have taken it on the chin as Covid-19 has taken hold, and the first to get hit was (naturally) China.

Of course, China also has been among the first countries to start the reopening process. They face the same struggle as we will—people aren’t exactly anxious to get out and hang with thousands of their closest friends—but like us, their economy and stock market will recover.

You can still find some scintillating discounts in the space, however. But rather than speculate in individual stocks, why not dip into a diversified fund that just so happens to pay a nearly 16% yield?

Templeton Dragon (TDF) is a China-centric closed-end fund that holds a few dozen positions in Chinese mainland stocks (65%), Cayman Islands-domiciled firms (24%), and a smattering of Hong Kong and Taiwan companies. While its largest holdings are Chinese tech firms Tencent Holdings (TCEHY) and Alibaba Group (BABA), it’s heaviest in financials, which is typical in many emerging-markets funds.

As I’ve written before, a lot to love about this fund. TDF has consistently outperformed the iShares MCHI ETF (MCHI) for years, and at the moment, it’s trading at a deep 16.5% discount to its net asset value (NAV) that’s well below its average 12.8% discount. And oh, that stated yield.

Unfortunately, you can’t spend dividends until you actually receive them, and TDF only dishes out its distributions twice a year. 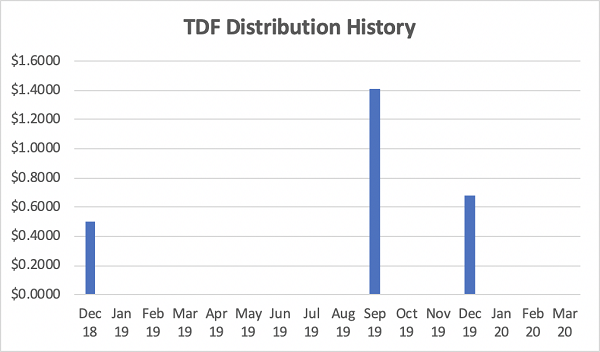 TDF’s only significant flaw is a dealbreaker for many: It only distributes dividends semiannually, and it pays out capital gains in September and December.

Iron Mountain (IRM) is an old-school REIT trying to go new-school. The company’s legacy business includes physical records management and shredding services—essentially storing paper records, or destroying them. But IRM isn’t blind to the future, and so for years it has been widening its offerings to include data center operations, data management and other services.

But IRM just hasn’t been quick enough to the draw. I wrote about Iron Mountain’s issues several months ago:

That’s not to say IRM can’t become a digital juggernaut somewhere much farther down the line, but for now, its legacy business is in decline while it struggles to make hay in where its future lies.”

As of the end of 2019, 70% of Iron Mountain’s revenues came from records management and shredding. Data protection was 11%, and data center was 6%. We’ll see if that changed much soon in IRM’s Q1 2020 report. But while Iron Mountain might enjoy some pick-up in its budding data segments, it’s not as well-positioned as other pure data-tech companies to enjoy the windfall as corporations scramble to take their operations remote.

The Eaton Vance Tax-Managed Buy-Write Opportunities (ETV) is effectively a hedger. The closed-end fund invests in a number of mostly big, blue-chip stocks, then writes call options on one or more U.S. indices to generate income. This is similar to selling covered calls, except the options writing and stock buying happen simultaneously.

And year-to-date, as well as through the bear market, it’s got a leg up on the index. It’s doing exactly what it should.

A Strategy That’s Built for Flat or Down Markets 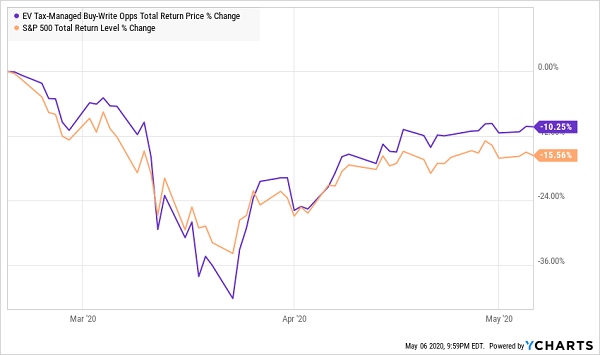 ETV has a high floor, but a low ceiling. It underperforms in bull markets.

ETV Hits Its Head on the Bull Ceiling 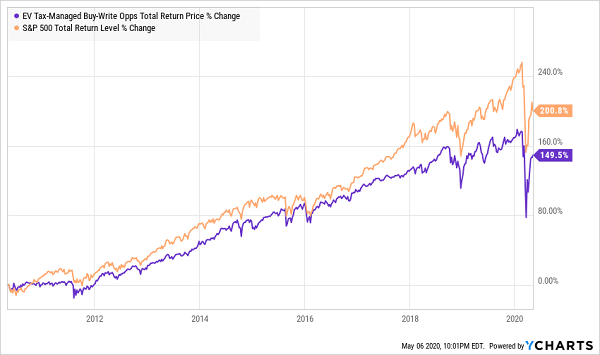 Buy-write and covered-call strategies do their best work when markets are either flat or on their way down. But the very nature of the strategy limits their upside, which in turn limits your upside.

As this bear market eventually gives its way to a new bull run, we should be ready to load up on “once-in-a-decade” dividend stocks. I’m talking about blue-chips with fat dividends and 100% to 200%+ total return upside in the years ahead.

I know what you’re thinking.

“How can I trust any high-yield stock when even blue chips are cutting their dividends left and right?”

You’re right to be skeptical and on your guard. Even some of Wall Street’s best companies are getting gouged through no fault of their own.

But in a bear market like this, the secret to success is a little unorthodox:

You actually need to get a little greedy.

My “Dream Retirement Portfolio” is exactly that. It’s a collection of safe-but-seldom-talked-about dividend payers that are delivering once-in-a-generation yields of up to 15%.

This portfolio is a plan of attack when everyone else is getting “defensive.” Of course, by defensive, what I really mean is that the flock is mindlessly hunkering down in stable blue chips that can’t possibly meet their retirement income needs.

All for the perception, the feeling, of safety. Even if it’s not really there.

Does a big market cap really equal a secure and stable payout? Don’t ask me.

…all of whom just watched their income disappear in a puff of smoke.

Meanwhile, my readers and I are sitting here waiting for our next jumbo-sized dividend check to come in the mail.

Go on the attack with my “Dream Retirement Portfolio” – a three-part set of buys AND sells that will help you clean house and put you ahead of your original retirement timeline.

Every day you wait is another day these yields on new money will come back to earth, and gains you’ll miss out on.

But you can put these three steps to work right away, and they’ll immediately transform any underperforming, income-light retirement into a perennial cash machine that will deliver the goods in any market cycle.

Every day you wait to take action could be another month of retirement that goes unfunded. Click here for details on my Dream Retirement Portfolio. You’ll discover the 12 widely held dividends to sell immediately, 4 contrarian buys paying up to 15%, and the names and tickers of these “Warren Buffett bonds” – absolutely risk free!