We’ve been saying the 2022 edition of the stock market will be a mess for a while now—and we were right. But there are still dividend-paying gems out there: we just need to know where to look. (I’ve got three “safety-first” bargain buys for you below.)

The “mess,” of course, was inflation caused by Jay Powell’s tidal wave of cheap money! Now he needs to ditch his Wall Street friends to clean it up:

Why the Fed’s Tune Flipped so Fast 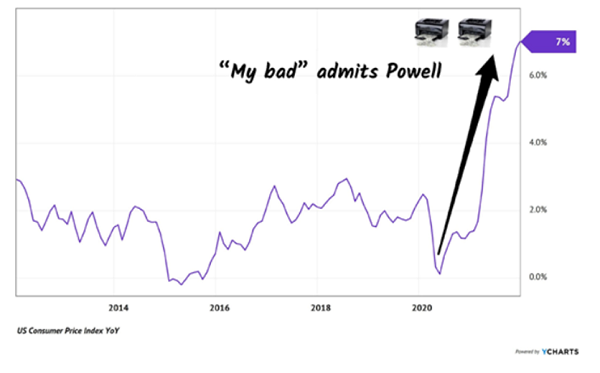 With consumer prices soaring, the so-called “Fed put”: the central bank’s tendency to change tack to rescue a plunging stock market, is dead.

We’re on our own—so selecting the right stocks is more important than ever. Fortunately for us contrarians stock-pickers, an environment like that works in our favor. But as the market adjusts to the new reality, caution is the watchword; let’s keep some dry powder for the multi-month run I see on the other side of this pullback.

Meantime, if you have cash burning a hole in your pocket, I have three sectors, and three tickers, that are good places to put it to work. Let’s start with regional banks, which come with a “Powell-Powered” buy/sell gauge that tells us when to get in (and out) for maximum gains—and dividends—with maximum safety.

Banks profit from the spread between the 10-year Treasury rate (benchmark for the loans they make to consumers) and the Fed’s overnight rate (at which banks lend to one another). The latter, of course, is set by the Fed and is likely to rise, starting in March.

And of course, the Fed has been a big buyer of government bonds since the spring of 2020—if not for this “whale” buying $80 billion of bonds a month, long-bond rates would be higher already.

How much higher is anyone’s guess. But now that the Fed is in the late stages of tapering its bond buys, everyone is rushing to place bets. Income investors are speculating that a fair rate for the 10-year is higher than here: 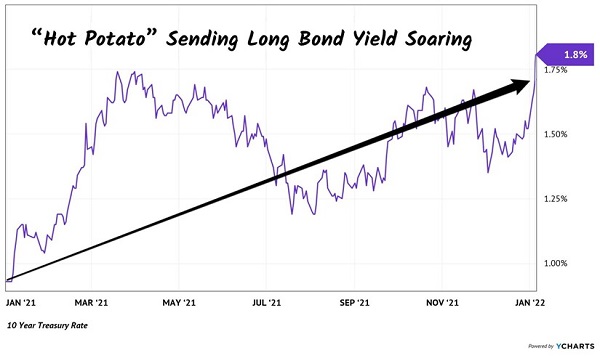 This gravy train can keep rolling as long as the long-bond rate continues to outpace the “short end” of the yield curve. And that’s the key indicator we’re watching very carefully with the banks these days. Luckily, we’ve got a way to predict where short-term rates are headed: the yield on the 2-year Treasury bond. 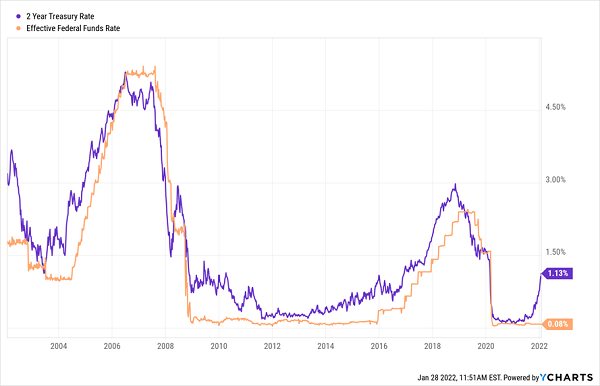 That leaves us with a simple strategy: buy, track the gap between the 2-year and 10-year Treasury rate, then sell when it flattens out.

Which brings us to KeyCorp (KEY), the regional bank we’re going to look at today, with 1,000 branches in Ohio and New York. It starts us off with a 3.1% yield (more than double the yield on the typical S&P 500 stock), then doubles down with payout growth of 550% over the last decade. In other words, if you bought KeyCorp then, you’d be yielding a lofty 9.4% on your original buy now!

A yield like that is the ultimate safety valve in a market like this, and as you can see below, the bank recently restarted dividend hikes after the Fed prohibited “systemically important financial institutions” such as KeyCorp from doing so during the earlier days of the pandemic. So current owners will see their yield on cost march higher again. 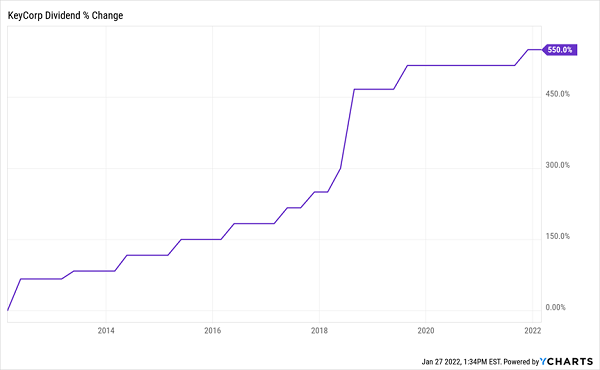 This payout is safe at just 23% of the bank’s net income in the last 12 months. To put that in context, KeyCorp could double its payout now and still be under 50%, a level I consider very safe.

The bank is also doing a good job of cutting its credit risk: it ended Q4 with nonperforming loans of 0.45% of its total loan portfolio, down from an already-minuscule 0.56% a year earlier.

Rising long-term rates are a tailwind for the bank, as is its bargain trailing-12-month P/E ratio of 9.6. This makes now a good time to buy and hang on as long-bond rates move up. Then, as mentioned, rotate out as the 2-year/10-year spread flattens.

(We’re nowhere near that at this point, and as I said, it’s possible we won’t be for a while. But I keep watch on this spread in my Hidden Yields dividend-growth service and will alert subscribers when it’s time to act. Below you can get yourself a Hidden Yields membership on a 60-day no-risk trial basis. You’ll also get a Special Report giving you my top 7 dividend-growth stocks for today’s wild markets.)

Utilities are a no-brainer buy in uncertain times. But that stability usually comes at a cost: lower returns.

Not so for WEC, which serves 4.6 million electricity and natural gas customers in Wisconsin, Illinois, Michigan and Minnesota. The stock has returned 272% in the last decade, crushing the benchmark Utilities Select Sector SPDR ETF (XLU): 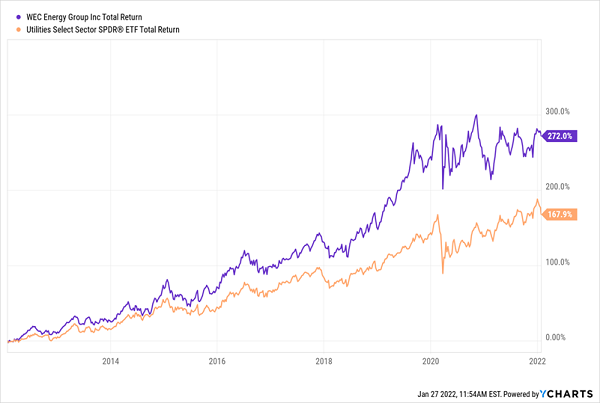 The knock on utilities is that they suffer when rates rise because higher rates increase the yields on investments that guarantee your principal, such as CDs and 10-year Treasuries. That draws away the conservative folks who usually buy utilities.

That sounds like a logical argument, but it doesn’t hold up. During the last rate-hike cycle, from late December 2015 to late December 2019, WEC—and the broader utility sector, as seen through the performance of XLU—did just fine: 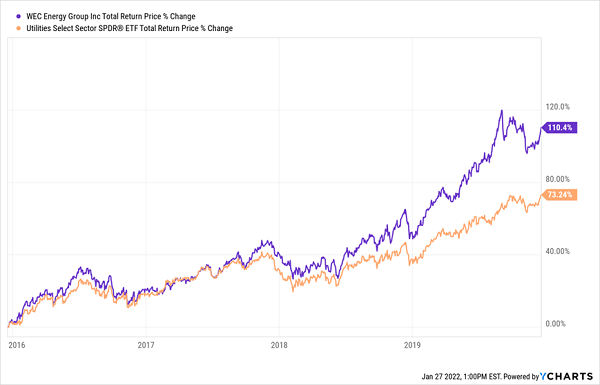 The reason is simple: the yield on WEC—which was 3.7% in December 2015 and is now around 3%—is far above the payouts you’d get from a CD or a Treasury note.

And that’s just the stock’s current yield. In the last two decades, WEC has hiked its payout by 628%. If you’d bought then, you’d be yielding 26% on your original buy!

This is the only safe way to get a dividend that big. And WEC’s sterling dividend record continues: it recently announced a 7.4% hike for the first quarter of 2022, powered by its strong business: since the end of March 2020, trailing-12-month revenue has risen 11% as the company successfully navigated the shift in demand from businesses to residences and back again as lockdowns came and went.

As well, the company’s last 12 months of payouts are just 64% of earnings—just below its stated target range of 65% to 70%. That’s safe for a utility with steady, predictable income. 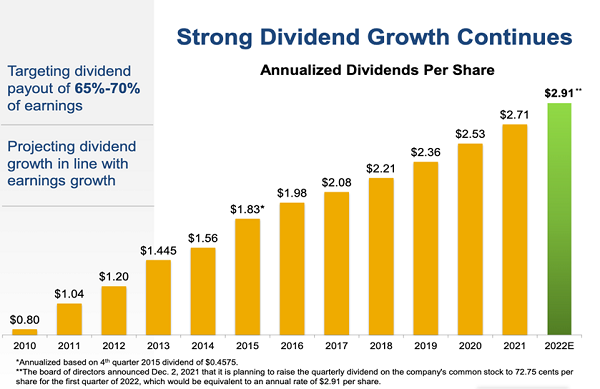 Finally, a look at the stock’s five-year beta rating—a measure of volatility—gives us another reason why it would be foolish to dump WEC for a CD or a Treasury: right now, that figure is 0.25, making it 75% less volatile than the S&P 500.

So we’re left with a company whose yield more than doubles that of the typical S&P 500 stock, with a soaring dividend, very low volatility and a history of gains when rates rise. That’s an attractive combination in today’s unhinged market.

A Consumer-Staples “Swing Trade” for a Changing Market

It’s a good buy to navigate the coming choppy months, with a five-year beta rating of just 0.46 (making it 54% less volatile than the S&P 500). Plus, P&G’s 2.2% dividend is safe at 59% of trailing-12-month earnings—and the shares could get a lift in late April, when it’s scheduled to announce its next dividend hike (last year’s raise was an impressive 10%).

True, Procter is dealing with price inflation across its product lines, but many of its products—think Tide laundry soap, Gillette after-shave and Cascade dishwasher detergent—are buys customers make without thinking. They also enjoy large market shares: Tide, for example, outsold the second-place competitor by nearly two-to-one in the US in 2018, according to Statista: 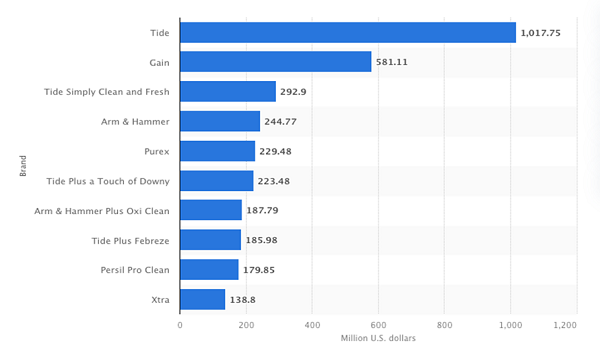 The company is also doing a great job of controlling costs: in the fourth quarter, selling, general and administrative expenses were essentially flat from the year before and lower as a percentage of sales (24.4% vs. 25.9%). That’s an impressive feat with inflation on a tear! It should also limit the price increases P&G has to pass on to consumers.

Finally, the stock trades at 28.1-times its last 12 months of earnings, which sounds high but is actually below its five-year average of 33.3.

As I said, this isn’t a stock for the long term—just until the market adjusts to a more hawkish Fed. Then we’d move into faster-growing firms with higher yields and faster dividend growth. But for now, it’s worth a look based on its low volatility and tight cost controls alone.

These 3 stocks are just the start of the “crash protection” package I have for you. I’ve got 7 MORE stocks I’ve pegged as urgent buys as markets dive on the Fed’s hawkish turn.

I see these 7 “pullback-proof” plays holding their own in the correction and going on to post reliable 15%+ returns, year in and year out, as they all operate businesses their clients can’t do without. That gives them superior pricing power—a key weapon for building their profits and dividends—and beating back inflation, too.

Speaking of dividends, these stout cash generators all have the rising profits and “fortress” balance sheets needed to keep their payouts popping for years to come! All 7 are ridiculously oversold now, which gives us an extra layer of downside protection and sets us up for those consistent year-over-year gains on the other side of the storm.

I’ve got full details on all 7 of these critical buys waiting for you now. Go right here and I’ll give you everything I have on each of them—names, tickers, current yields and more.