Today we’re going to talk about the single biggest risk you face in your golden years.

But don’t worry—I’ll also show you how to clobber that risk and set yourself up for an easy $40,000 in cash in every year of your retirement. More on that below.

First, the risk I’m talking about is the very real chance you’ll outlive your nest egg. Because a sweeping study says you could be very wrong about the length of your retirement.

Here’s what the numbers say: in 1992, the University of Michigan asked 26,000 Americans 50 years of age and older how long they thought they’d live. The results, collected 25 years later, are staggering.

So now might be a good time to rethink your expectation of how long you’ll live—because you’ll likely be around a lot longer!

Here’s where Wall Street comes in, with a “solution” only it could cook up.

It’s called the 4% withdrawal rule, and it recommends supplementing your dividend income by withdrawing 4% from your capital every year in retirement.

Trouble is, every few years you get a situation like this: 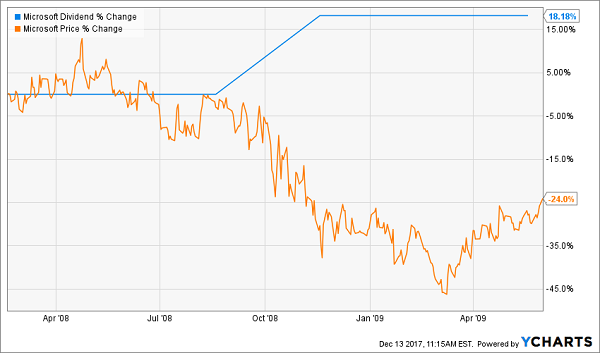 In fact, we’re seeing one right now due to the market’s sharp selloff! Any retirees holding Microsoft (MSFT) in late ’08 or ’18 are withdrawing money at exactly the wrong time. Microsoft’s dividend is fine, but if you need income, you must sell even more shares with the price low.

Remember dollar-cost averaging, which you may have used to build your nest egg? This is the same phenomenon but in reverse! In this scenario, you’re selling more shares when prices are low and fewer when prices are high.

It’s a straight path to prematurely running down your savings. And it pains me that so many folks take it as gospel.

But don’t despair, because there’s an easy solution: build a retirement portfolio with an outsized dividend yield. I’m talking an 8% average payout or better. That’s enough to live on dividends alone with as little as $500,000 saved up.

I’ll show you the two asset classes (and three specific buys) that can get you there just a little further on.

But bear with me, because before we build our high-yield retirement portfolio, we need to purge our nest egg of the “sacred cows” that look safe but actually drain your returns—including these two:

As I write, 10-Year Treasuries yield 3%. You could get a similar rate from a CD … if you lock away your cash for five years.

That’s a lot to ask for 3%. And this is the definition of “dead money,” because you’ll get no capital gains, just your cash back after the five years is up.

This may sound safe, but inflation will eat most of that 3%, leaving you right back where you started. And if you did try to retire on it, you’d need to invest $1.5 million to drive a $40,000 yearly income stream. That’s just not realistic for most folks.

You’ve probably heard of these 50 companies, which have raised their dividends annually for 25 years. Some of America’s best-known firms make the cut, like Walmart (WMT), 3M (MMM) and McDonald’s (MCD).

And the truth is, there are some solid picks among the so-called aristocracy. But the average Dividend Aristocrat, as measured by the ProShares S&P 500 Dividend Aristocrats ETF (NOBL), pays even less than the 10-Year: just 2.5%! So you’d need north of $1.6 million to get our theoretical $40,000 income stream.

Worse, your average Aristocrat hasn’t even beaten the S&P 500 over the 4 years since NOBL was launched—even when you include dividends. 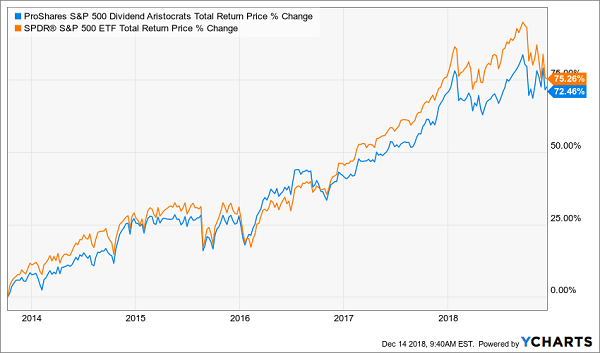 Sure, a 72% return in five years isn’t bad, but it’s still disappointing, because dividend growth is the No. 1 driver of share prices, so these companies should have a built-in edge over your typical S&P 500 name.

A big reason why the Aristocrats don’t gain from their dividend-growth edge is that too many, like Colgate-Palmolive (CL), churn out meager one- or two-cent yearly hikes just to stay in the club, and that’s not enough to tempt income-starved investors.

We need to do better. Which brings me to…

The good news is that topping the popular choices is easy. We just need to go where first-level investors aren’t, starting with…

Here’s something most folks don’t know: you can double your dividend payouts (or better) by switching from the average S&P 500 stock to a closed-end fund (CEF). (If you’re not familiar with these wonderful income plays, many of which pay 8%+ dividends, click here for a quick primer.)

And you can often shift from stocks to CEFs without even switching investments!

Here’s what I mean; if you own, say, MasterCard (MA) or Honeywell International (HON), you can “trade in” their payouts (0.7% and 2.6%, respectively) for a 7.8% dividend from the Gabelli Dividend & Income Trust (GDV), which has both stocks in its top 10 holdings.

Better still, GDV trades at a totally unusual 11.4% discount to net asset value (NAV, or what its underlying portfolio is actually worth). That bakes in some nice price upside and makes the dividend safer, because fund manager Mario Gabelli only has to earn 6.8% of GDV’s NAV—not the 7.8% yield on market price—to keep its payouts humming along—and that’s a much easier return to get, especially for a seasoned vet like him.

REITs—owners of properties ranging from apartments to self-storage units—don’t pay income taxes so long as they hand over most of their earnings to shareholders.

That means bigger dividend checks for us!

REIT Buy No. 1: A Growing 5.5% Dividend From Aging Boomers

For a high-yield REIT, look to healthcare landlord Ventas (VTR): it pays a market-busting 5.5% dividend yield now—and that dividend is safe, thanks to Ventas’s low (for a REIT) payout ratio of 75% of funds from operations (FFO; the REIT equivalent of earnings per share).

Better yet, due to overdone interest-rate fears (which are now much less of a concern than they were a few weeks ago), Ventas is cheap today, at just 15-times FFO!

Finally, you can get the best of both REITs and CEFs by picking up a closed-end fund that owns REITs, like the Cohen & Steers Quality Income Realty Fund (RQI).

As you can see, its portfolio is nicely diversified across the space, so you’ve got some protection if one particular segment runs into difficulty:

Management firm Cohen & Steers has been around since 1986, and its team takes the outsized dividends REITs already pay, adds in these stocks’ price gains and tops things off with a conservative amount of leverage (around 24% of the portfolio) to hand us a huge 9.7% dividend that rolls in every month like clockwork:

And in case you’re wondering, this team knows how to spot bargains in REIT land: check out how RQI dominated the go-to REIT benchmark Vanguard Real Estate ETF (VNQ) in the last decade: 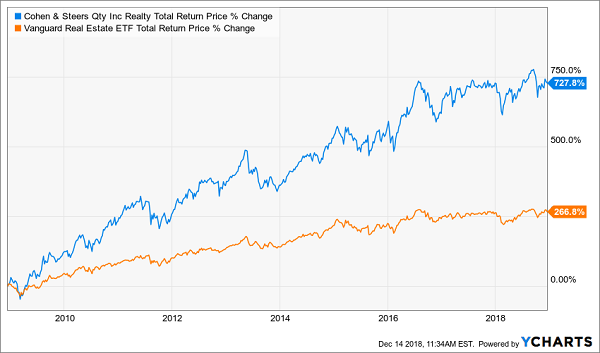 The best time to buy is right now: as I write, RQI trades at a ridiculous 11.8% discount to NAV, and it’s traded at an almost nonexistent 0.5% discount in the past year. That sets the table for 12.9% price upside as RQI’s discount moves back to that level.

So what’s the bottom line on these three rock-solid income plays? Throw them all together in their own little “mini-portfolio” and you’ve got an average yield of 7.6%—enough to hand you $40,000 of yearly income on a $525,000 upfront investment.

But we’re not stopping there! Because the safest strategy is to take just one more step and …

And you’ll be getting a lot more diversification, too, because what I’m about to show you will spread your cash out over six rock-solid investments instead of just three (and yes, this dynamic “six-pack” includes CEFs and REITs, plus other too-often-ignored income plays, like preferred shares).

The key is my 8% “No-Withdrawal” retirement portfolio, which I’ve custom-built to protect your nest egg in a downturn and deliver an 8% average dividend all the time, easily enough to hand us $40,000 a year on just $500,000 in savings!

I’m ready to share all the details with you now. CLICK HERE and I’ll give you my full strategy, plus the names and ticker symbols of each of the 6 winning income plays inside this portfolio.