Legendary investor George Soros is controversial, but his tremendous investment performance over a lifetime is indisputable. Soros attributes it to a concept called “reflexivity.”

Simply put, this refers to the tendency for market expectations to create market outcomes. For instance, when the market expects a fund to crash, it will sell off that fund, thereby causing it to crash.

Here’s the opportunity: when a fund crashes just because everyone thinks it will, the fund tends to bounce back when everyone realizes the market made a mistake.

This happens constantly in the closed-end fund (CEF) universe—a relatively small world of $300 billion in assets managed in about 500 funds. That small size causes mainstream investors to overlook CEFs and instead focus on the multi-trillion-dollar ETF universe.

That’s a mistake, because many CEFs provide tremendous contrarian opportunities.

For instance, look at what happened to the PIMCO Corporate & Income Opportunities Fund (PTY) in mid-2015, when the market was convinced that higher interest rates would destroy this fund’s fundamental (i.e., net asset value, or NAV) performance. 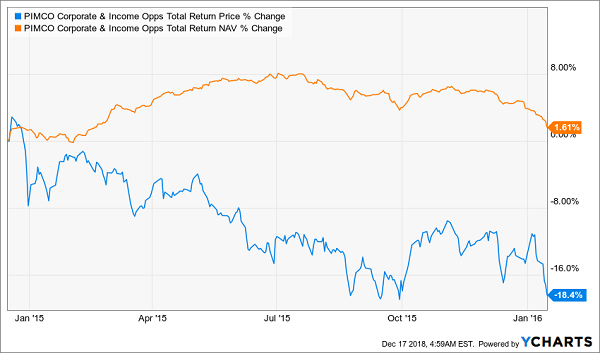 With investors anticipating a big drop in 2016, the fund’s market price plunged 18.4% by the start of that year, even though its NAV was steady. The reason? Fears of a huge crash in the fund’s NAV due to interest rates, which started rising in December 2015 and continue to do so.

But fast-forward to now and you can see how wrong that bet was: 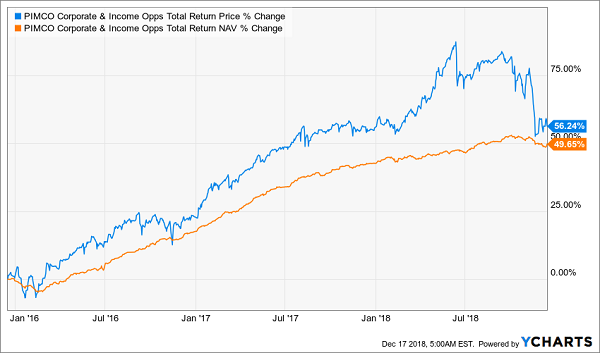 This is classic reflexivity investing at play. Investors think PTY will fall, so they sell it off, causing its market price to fall—but then they realize they were wrong and jump back in.

This happens all the time in CEFs, and there are three bond funds where this opportunity has recently opened up in a major way.

Just like PTY, which focuses on corporate and other taxable bonds, these three CEFs specialize in taxable bonds that have sold off lately due to interest-rate fears that are far overblown.

Our first CEF is the MFS Intermediate High Income Fund (CIF), which has seen its NAV dip slightly in recent months, but by no means anywhere near as much as its price has plummeted: 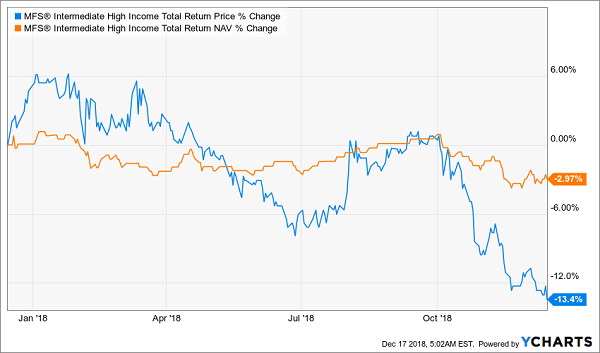 As a result, CIF’s discount to NAV has increased to 9.4%, its widest margin since the end of 2016. CIF was recently trading at an 8% premium, which shows how much opportunity there will be when the market catches on to the mistake it has made with this fund.

While you’re waiting for that to happen, you can collect CIF’s amazing 11.2% dividend.

CIF isn’t the only bond fund that is surreally oversold. The Virtus Global Multi-Sector Income Fund (VGI) has seen a tremendous 12.9% price decline in the last six months, while its NAV is down 2.5%. 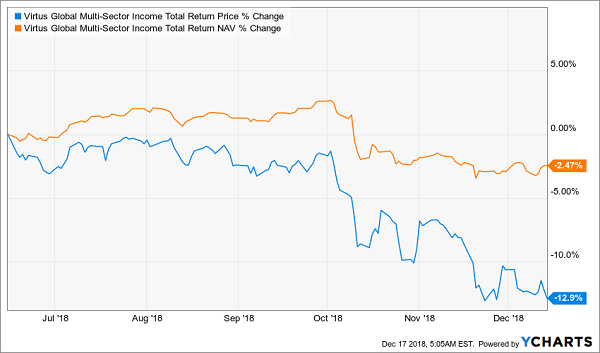 To be sure, VGI’s 2.5% NAV decline lately isn’t good—and its performance over the medium term has also been poor. But the fund’s fundamentals look strong at current pricing. VGI’s recent 8% premium has vanished as its discount reached a three-year low: 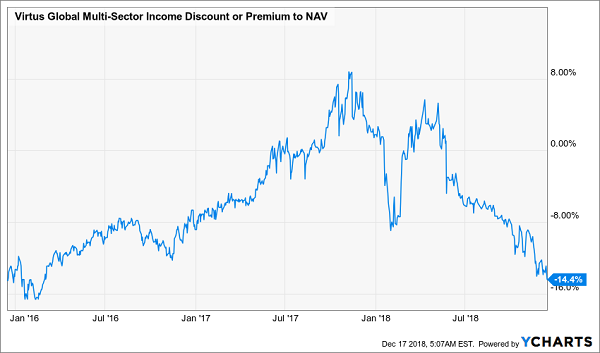 That is an opportunity for investors to pocket VGI’s unthinkable 13.4% yield due to this oversold situation, while getting exposure to a global bond market that has now discounted many of the credit risks overseas firms are facing.

If you saw The Big Short, you may be familiar with these: they’re the derivatives that played a main role in the Great Recession and subprime housing crash of 2007–09. But since there have never been two panics in a row over the same asset class, MBSs are counterintuitively incredibly safe (especially thanks to the extra regulations that have lowered the risk in the housing market).

That’s why DMO has delivered this return since inception:

A Standout Performance From an Unloved Asset 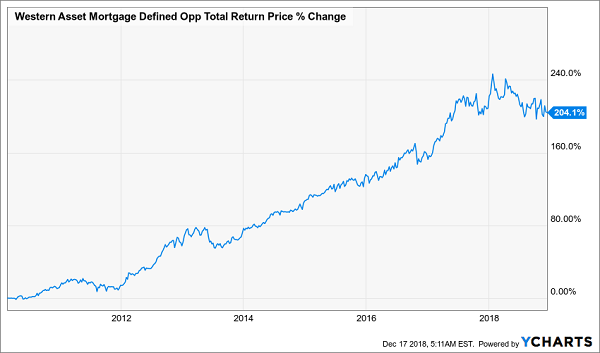 A 200% gain in just seven years is incredibly impressive, but the market doesn’t care—which is why the near-10% premium this fund has held in recent years has dwindled to just a 2.7% premium, one of the cheapest levels for this fund in half a decade.

Why has this happened? Recent history—but the truly amazing thing is how the market selloff flies in the face of reality. 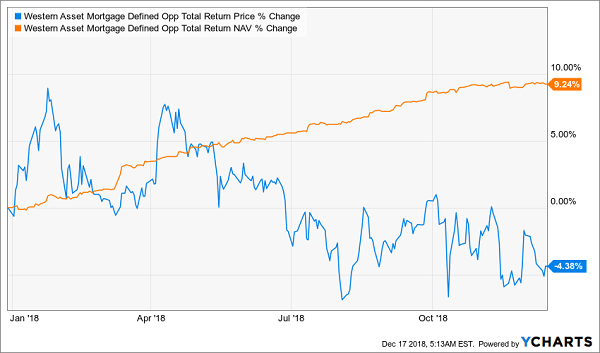 The obvious conclusion: a reflexive selloff has become a buying opportunity for these quality funds, and the market’s current sour mood will likely result in a sharp trend reversal in 2019 and beyond.

Right now I’m pounding the table on 5 other CEFs trading at such ridiculous discounts that they’re “spring loaded” for 20% price gains in 2019, as these bizarre markdowns snap back to normal.

You see, my top 5 funds’ huge discounts also let us sleep well at night. Because if the market falls on its face next year—which is the opposite of what I expect, by the way—these funds are already dirt-cheap, so they’ve got some nice downside protection built in here too … and we’ll still collect their 8% average dividends!

These are exactly the kinds of investments you need in times like this, when the Dow regularly drops 2% or more in a single day.