Why the FDIC Will Soon Require Hundreds of Billions in Bailout Funds…At Least!

Despite the self congratulatory nature of the financial media in the recent weeks and months, I remain highly skeptical that the worst is indeed behind us. Down in the trenches of daily economic life, I can’t find any noticable signs of improvement. In fact, the only thing that seems to have changed is a sharp 50% rally in the major US indices, which has buoyed bullishness towards the stock market.
If my suspicions are correct, then one house of cards that’s sure to be blown over during the first gust of economic bad news is the FDIC. It’s chances of funding it’s insurance obligations is laughable to say the least. And because it’s not politically palatable to allow the FDIC to default on these obligations, this means more bailouts are on the way – likely to the tune of hundreds of billions of dollars.
To explore this theme in more detail, we’ll turn it over to our good friend Bud Conrad from Casey Research. Bud, a frequent guest columnist, cranks out top notch investment analysis that’s “too heavy” for mainstream finance from his home in Silicon Valley. I am a subscriber of Bud’s, and also am fortunate enough to be a part of the local SV investment group that Casey Research organizes and Bud participates in.
Read on for Bud’s insightful piece…
***

The FDIC Is in Trouble

As we all know, the Federal Deposit Insurance Corporation (FDIC) guarantees depositors that they’ll get their money back if a bank fails, at least up to a certain amount. To fund its operations, the FDIC collects small fees from the banks that are held in reserve for the purpose of taking over troubled banks and paying off depositors.

Since the Great Depression, a period marked by widespread runs on banks, the FDIC has done a good job of fulfilling its mandate. So how are they doing in this crisis?

In a nutshell, they are in trouble.

The FDIC insures 8,246 institutions, with $13.5 trillion in assets. Not all of them are going bankrupt, of course. Yet as of late July, a disturbing 64 banks had gone belly up this year – the most since 1992 – costing the FDIC $12.5 billion. At the end of Q1, the agency was already asking for emergency funding.

And worse, much worse, is likely yet to come. The following chart shows the total assets on the books of the FDIC’s list of 305 troubled banks. The list doesn’t include the biggest banks that are considered too big to fail, as they are being separately supported with bailouts. By contrast, if the banks on this list fail, the FDIC is on the hook to have to step in and take them over and, of course, make depositors whole. 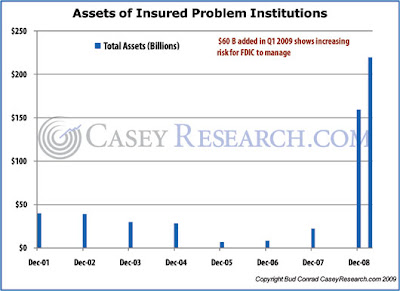 Other measures of how serious the losses at banks are becoming can be seen in the chart below, which shows charge-offs and non-current loans at all banks. You can see that the Net Charge-offs remain stubbornly high, with banks charging off almost $40 billion in bad loans in the last two quarters alone. And the number of non-current loans – loans where payments are not being kept up – is soaring.

Together, these measures indicate the potential for more big failures and more big bailouts coming down the pike. 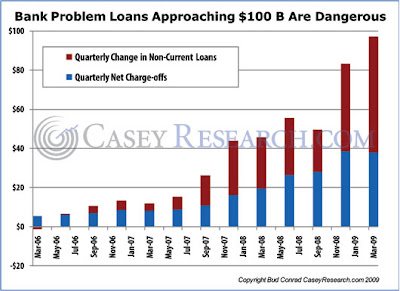 Into the battle against bank insolvency the Fed brings a level of reserves that can best be described as paper-thin. From almost $60 billion last fall, the FDIC’s reserves have been drawn down to only about $13 billion today, a 16-year low. A quick look at the FDIC’s own data shows us how inadequate those reserves are compared to the deposits they are now insuring.

The chart below says it all: 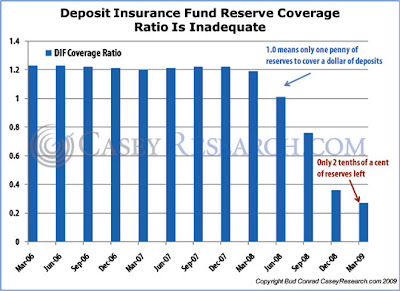 As you can see, the Federal Deposit Insurance Corporation currently covers each dollar on deposit with a trivial 2/10ths of a penny.

And even that understates the seriousness of the situation: the $4.8 trillion in deposits the FDIC is providing coverage on doesn’t include the expansion that now extends insurance coverage from $100,000 to $250,000 for normal bank accounts. That likely brings the exposure of the FDIC closer to $6 trillion. But that’s pretty inconsequential at this point: using any reasonable accounting method, the FDIC is already bankrupt and will require hundreds of billions of dollars in government bailouts just to keep the doors open.

So, given the dire shape of its finances, what measures is the FDIC taking, you know, to batten down the hatches and all that?

For starters, they are expanding their mandate by guaranteeing bank loans – $350 billion and counting at this point. And the government has tapped the FDIC to play a pivotal role in guaranteeing the loans issued to buy toxic waste through the government’s highly problematic and fraud-prone new Private Public Investment Partnership (PPIP). The FDIC’s commitment to the PPIP is and may become limited based on its resources.

It is hard to draw any other conclusion but that hundreds of billions in new funding will be required to keep the FDIC operating. Given the catastrophic consequences of the FDIC failing, starting with a bank run of biblical proportions, there’s no question it will get whatever funding it needs. By loading the new loan guarantee responsibilities and the PPIP onto the FDIC’s back, the administration will go back to Congress and ask for the next large bailout.

Of course, in the end, all of this falls on the taxpayer, either directly in the form of more taxes or indirectly via the destruction of the dollar’s purchasing power. Another bale of straw on the camel’s back, and another reason to be concerned about holding paper dollars for the long term.

PS: If you still trust the government to take care of you and yours when the feces hits the fan, you’re on the path to financial disaster. But even in times of crisis, there are things you can do to protect yourself – for example, by betting against the insane machinations of the government and Fed. You can’t make them stop, but at least you can profit from them. Read about Bud Conrad’s favorite investment of 2009… by clicking here.