Why Commodity/Shipping Weakness Could Predict Next Leg Down in Stocks

Interesting times in the markets. US equities have now completed a standard fare “Fibonacci retracement” off of the March 6 lows. Now, where to from here?
Bulls and bears alike conceded that a strong rally was quite probable. Now that it’s happened, what can we expect?
There seem to be two or three prevailing market outlooks today – and all 3 are quite different!
1. We’ve averted armageddon. Now it’s back to business as usual, albeit at lower levels. How much lower is the big question.
2. We haven’t yet seen the bottom of this, and the March 6 lows are destined to be taken out. This is nothing more than a parallel universe to 1930.
3. This rally was engineered by the government and driven by the printing of money. Inflation has shown up sooner than expected – thus we should pile into gold, silver, and metals while we still can.
If you discount the less dramatic “Golilocks scenario” of #1, then you’re left again with inflation and deflation staring you in the face.
Both sides of the debate have strong arguments for – and against. It’s one of the most intellectually challenging forecasts that I can remember seeing in my (young) investing career.
I’ve accepted the fact that I’m not as smart as the gurus on both sides of the debate…if they can’t figure out which it will be, how can I!
While, as regular readers know, I’ve recently warmed to the deflationary outlook, I’d still like to hedge my bets in case I’m wrong.
So, though I’m not doing much trading, I am watching the commodity sector closer than every. You’ll recall that commodities, one by one, rolled over in early 2008, prior to the equity markets. I’ve come to believe that commodity prices are “smarter” economic forecasters than, say, the S&P 500.
Here are three charts that I pulled up this evening, which appear potentially ominous, at least in the short term.
The Baltic Dry Index shows that, well, less stuff is being shipped:

Flash Player 9 or higher is required to view the chart
Click here to download Flash Player now
View the full INDEX:BALDRY chart at Wikinvest
Where has everything been shipped to? China, of course!
Uh oh…looks like China is starting to turn down:

Flash Player 9 or higher is required to view the chart
Click here to download Flash Player now
View the full INDEX:SSEC chart at Wikinvest
Finally, let’s take a look at oil – which last peaked in June of 2008. Oil looks like it’s forming out a “lower high”, and is having trouble holding onto the $70 mark.

Flash Player 9 or higher is required to view the chart
Click here to download Flash Player now
View the full FUTURE:CL00 chart at Wikinvest
Bottom Line: There appears to be A LOT of optimism priced into, well, just about everything right now. If US/global growth disappoints later this year (hard to imagine it won’t), we could be in for another leg down. So, take heed to these potential leading indicators!
How Productivity May Hold the Secret to the Inflation/Deflation Outcome
My good friend Jonathan Lederer, President of Lederer Private Wealth Management, an investment advisory firm based quite close to my home here in Sacramento. Every quarter, Jon creates a fantastic update and outlook for his clients, where he dives into the current economic situation, and often applies a unique approach to the markets.
Jon really outdid himself in his Q3 update for 2009 – when he was kind enough to forward me a preview copy of his newsletter, I said: “Jon – this rocks! Can we please post this on the blog?”
Lucky for us, he was all for it – and you can read this great inflation/deflation piece here.
Quick Market Hits for the Week Ahead
Positions Update
No new trades this week…cotton closed “limit down” on Friday after rallying earlier in the week.
Fundamentals for cotton appear to be quite favorable, and these prices should be a bargain. However if we are, in fact, in a Global Depression, we may very well see cotton, and other commodities, roll over.
Recall in early to mid 2008, commodity prices peaked before the broader equity indices – rolling over one by one as a precurser to the Great Deleveraging. Keep an eye on the commodity sector this time around, as it may serve as our canary in the coal mine. 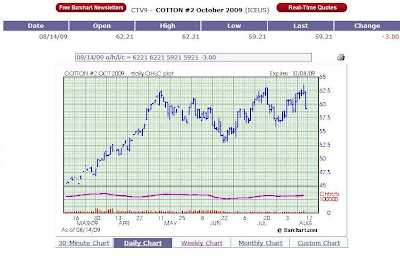