Who’s Buying Oil Today? The Answer May Surprise You

Peak Oil. Sometimes it sounds sooooo 2008.
What’s the real story? Is there too much oil out there, or not enough? Seems like it’s tough to get a straight answer on this question – or at least an answer that experts agree on.
In this guest piece, Marin Katusa of Casey Research takes a look at the Strategic Oil Reserves of the world’s leading energy consumers. I look forward to Marin’s work each month as a subscriber of his, so I’m fortunate to be able to share this piece with you here.
I can’t say that this will clear up the energy confusion, but I can say that you should always listen to what Marin has to say.
Read on to get an insider’s view at what’s going on behind the scenes with Strategic Oil Reserves, and how stockpiling, and/or unloading, could affect the price of crude oil going forward…
***

By Marin Katusa, Senior Editor, Casey’s Energy Opportunities
As the U.S. strategic petroleum reserve (SPR) approaches capacity (721.5 million barrels filled out of a total possible 727 million, and will be filled by January 2010), the federal government will fade out of the oil-buying business. Some bearish traders believe that this factor can weigh in on prices, since most petroleum stocks in the United States are government-held rather than private. Bullish traders have also used the filling of the Chinese SPR as a reason that oil should go much higher.

The team at Casey’s Energy Opportunities believe that planned government buying or selling of crude oil for SPRs actually have very little impact in the overall market. However, an overall drawdown of worldwide inventory could put downward pressure on the price of oil. The various countries also have their particular reasons and influences in decisions to tap their reserves.

So which countries are executing preparedness plans to fill their strategic reserves with $70 oil now (as opposed to $140+)? Below are the 10 countries that consume the most oil in the world, as of 2008, the latest figures available from the BP Statistical Review of World Energy: 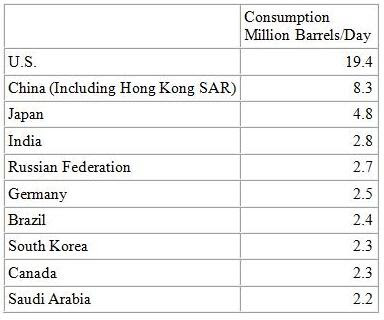 Russia, Canada, and Saudi Arabia can leave the list, as they are net exporters of oil and thus do not actually require a strategic reserve, at least in the short term. We’ll also bump Brazil, because its balance of imports is dwindling every year, and it should become a exporter before it requires a reserve. That leaves six countries to examine.
The United States

Not surprisingly, America has the largest strategic reserve in the world in an absolute sense. Its 727 million barrels are stored in four hollowed-out salt domes (and one pending) along the coastline of the Gulf of Mexico. These add up to some 62 days’ worth of imports, according to government sources. The United States government currently has plans to push this to 1 billion barrels, or about 85 days’ worth of imports, which would make the reserves equivalent to those of Japan and Korea.

The SPR build-up will be accomplished by expanding two of the current facilities, for an additional 113 million barrels, and (probably) building a new one in Richton, Missouri, for 160 million barrels. The Richton project has met local opposition, because it would require pumping 50 million gallons of freshwater per day from the Pascagoula River to dissolve enough salt to open up another subterranean cavern. The total cost of the program is estimated at US$3.7 billion, not including the cost to fill the reserves. Oil purchases are likely to be slow, at around 100,000 bpd (barrels per day) before 2014 and 150,000 bpd thereafter.

In a real emergency, the combined American strategic and commercial reserves (the latter held by private corporations, especially refiners) may seem unnervingly thin from the perspective of energy security. Add to that the fact that the government can release them at a rate of only 4.4 million barrels per day, or about half its imports.

Still, the 108 or so days’ reserve it has between government and commercial sources are considered adequate by international standards. The United States has used this reserve twice in the past 20 years (Desert Storm and Hurricane Katrina) to combat severe demand or supply disruptions. It also has the luxury of importing more oil from Canada in an emergency.

Scenarios that could force a sustained drawdown of reserves:

China’s strategic reserves began being built in 2004, when leaders in China began to realize that the country had no adequate government-controlled reserves to combat any disruptions in the supply of oil. China is a large importer and is dependent on the same sources of foreign oil as the United States. China is even more anxious to build such a reserve, as two of its neighbors, Korea and Japan, both have large strategic reserves.

China currently has four government reserves with a total reserve potential of 272 million barrels, which translates to about 30 days’ consumption. Two of the four have been confirmed full, and there are rumors that all four are and that China has taken advantage of the recent precipitous drop in the price of oil to buy up. According to Chinese government sources, however, the reserves are likely not to be completely full until 2010, and 2009 buying of oil will be at around 42 million barrels.

The government has also announced plans to increase the country’s reserve from 30 to 100 days of consumption. The next stage of the development will call for an additional 170 million barrels in eight storage facilities. The locations of the facilities are as yet secret.

In an emergency, China would likely turn to Russia to buy oil, though only the naive would be surprised if Russia added a premium for the privilege.

Scenarios that could force a sustained drawdown of reserves in China:

Worldwide embargo on China due to a Chinese invasion of Taiwan.

We have placed Japan and South Korea’s reserves together, as the two countries have a treaty that allows them to share their strategic reserves.

Resource-poor Japan has one of the world’s largest strategic oil reserves, enough for 82 days of imports. State-controlled reserves are run by the state-owned Japan Oil, Gas, and Metals National Corporation. The reserves consist of 320 million barrels in 10 different locations, which makes them second only to the United States in absolute volume. Japan’s island geography means that having an emergency supply of crude oil is crucial, and the Japanese government obviously has not ignored this aspect.

South Korea is in one of the global “hotspots” in the world, right beside North Korea. As the country is under an almost constant threat of war, the government has stocked up some 76 million barrels, with capacity for an additional 40 million barrels.

Scenarios that could force a drawdown of reserves:

India has a small reserve it began to build in 2004. This stockpile is sufficient for perhaps only two weeks of consumption. The country eventually wants to raise this level to 45 days, though the first phase has not even been completed yet. The projects are estimated to come online in 2012, which means it has taken eight years from planning to completion. These figures imply that India will not even have a somewhat sufficient strategic reserve until 2016, given that the expansion project was approved in 2008.

Germany has the largest reserve in Europe and is among the top in the world as well. Its government has satisfied a federal law that regulates storage be at least 90 days’ worth of net imports. More than half of the storage is in Southern Germany, where large salt caverns exist. Germany is well prepared in its strategic oil reserves, and there are no glaring factors that would force a drawdown of reserves, barring a global catastrophe. Furthermore, the reserves of Germany, France, and Italy are pooled and can be used by any of the three countries in an emergency.

So How Much Do the Reserves Matter?

According to the U.S. Energy Information Administration (EIA) estimates, some 2 billion barrels are held in government-owned strategic reserves around the world. Though this seems like plenty of oil, does it really impact the spot price of oil? Collectively, the answer is yes, as this volume corresponds to 23 days’ worth of global consumption. If drawn down together over a short period of time, the effect on spot price could be substantial.

For illustration’s sake, suppose that countries collectively draw down their entire reserves over the period of a year. This rate would make up for 10% of the daily worldwide trade of crude oil, which could certainly impact price (imagine ConocoPhillips and ExxonMobil both going under at the same time).

Individually, however, even China and the United States have a limited impact on the spot price of oil over a single year. If the United States’ inventory were drawn over an entire year, it would only make for a 4% increase in supply. Under normal buying patterns of each country’s strategic reserves, the impact is even smaller. Since China’s 42-million-barrel purchase is over one year, their purchase would not even make a dent in the daily trade of oil.

Thus, a concerted effort by the worldwide reserves can definitely keep prices down in the short term (within a year, two at best), but cannot make for a paradigm shift in the supply/demand model of oil or the Peak Oil argument. And from the buying side, if governments plan the filling of their strategic reserves, the impact on the spot price of oil is likely to be minimal.

Perception is a tricky horse to ride, however, as we all know. Given a worldwide panic for oil à la the 1973 oil embargo, oil prices could spike in the short term, because government reserves would likely raise purchases 10% or so in a real emergency. This effect would be short lived for the foreseeable future, though, as worldwide reserves are already reaching their limits.

In short, if everything goes according to “plan” by the governments, even filling a large reserve such as the Chinese SPR would have little impact on the price of oil. For SPRs to truly impact the spot price of oil, it would have to be a global situation, with war and embargo the two most likely scenarios. Even then, the impact would be mellowed by limitations on how quickly governments can either release or purchase the oil.

Marin Katusa is a math prodigy and the chief investment strategist of Casey Research’s Energy Division. At the age of 31, he is one of the youngest self-made multimillionaires in Canada… thanks to an algorithmic system he developed that alerts him when a company with sound fundamentals has become so undervalued that it’s a screaming buy.

For years, Marin has been advising Casey subscribers on the best energy picks, generating extraordinary returns. Learn how you, too, can profit from his “secret system” – click here to read more.