I just picked up a Cocoa contract. I had been eying cocoa for about a week, but wanted enough validation to pull the trigger. Of course now I wish I had pulled it sooner – but that’s the way it works.

Check out the cocoa chart here – very strong rally following up from the recent nasty correction. I haven’t been able to find much news, other than funds buying (surprise, surprise) and a lack of sellers (gee, thanks). Though the lack of sellers is a bit interesting – perhaps all the weak longs were shaken by the recent correction.

Rough rice also appears to be in runaway mode – supply concerns are driving this. Nice quote from this article:

“There’s been a popular misconception that the world can produce as much food as it likes. Well, it obviously can’t. And Asia can’t feed itself at the moment,” Gerry Lawson, chairman of major Australian rice producer Sunrice, told Reuters.

That sums up the bull market in agriculture pretty nicely. If rice keeps running away, I may start walking around town wearing this man’s jersey: 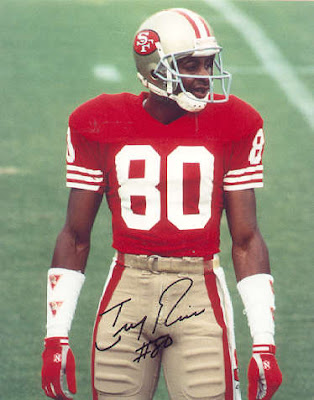 Corn – both technically and fundamentally – looks poised to continue its steady climb up. There is not a lot of room for error with this year’s corn crop, considering so much is already “earmarked” (hardy har har) for ethanol.

And coffee’s looking hot also, as news about disappointing Brazil exports, combined with the ever weakening dollar, has folks piling back into coffee contracts. Aw heck, I might have to pick up one of these contracts after I finish writing this post 🙂