Quantitative Easing Ends (At Least For Now)
April 1st marked the end of the Fed’s renowned money printing program, also known as “Quantitative Easing” for those who prefer to stick their heads in the sand and ignore what’s actually happening.
From The Daily Reckoning:
Under the (QE) program, the Federal Reserve graciously bought $1.25 trillion of mortgage-backed securities from panicky banks and hedge funds over the last 12 months. But now, it’s over. Today, the stock market lost an important undergarment… and we suspect it will begin sagging dramatically, soon.

In more direct terms, the Fed has stopped “funneling new fiat money into the mortgage-backed security market,” explains short side strategist Dan Amoss, “which, in turn, freed up extra cash for portfolio managers to recycle into bonds and stocks. This fiat money is the illusion of real savings. It goes a long way toward explaining how a country deficient in savings can fund massive government deficits at low rates and aggressively bid up the prices of stocks.”

So what happens now?

We’ve had one day of trading since QE ended, and so far, so good. But it’s early yet, and it will be interesting to see how long the markets can continue to seemingly levitate in thin air.
Of course, there’s nothing to say the government will not reinstate QE the moment things head south again. In fact, gurus like Marc Faber assure this is a “sure thing” – that when the stock market turns south again, Bernanke will print and print and print until the markets turn around.
Ed. note: Big thank you to Agora Financial, publisher of The Daily Reckoning, for sponsoring the blog! Agora has a lot of great paid and free resources, and I’d encourage you to check them out. Please do me a favor and click on an ad or two of theirs – thanks!
*** A Word From Our Sponsor, Agora Financial ***
The “New” War That Could Rocket Oil Past $220 Before 2011

This shocking conflict is eight times bigger than the wars in Iraq or Afghanistan. It’s also lethal enough to at least DOUBLE the price of gas and oil before 2011…
Bunker down against soaring energy costs with the ONE “safe haven” financial plan that could pay you gains up to 668%. Read the full report.
***
Sir John Templeton’s Final Words: We’re Screwed
Legendary investor John Templeton, who passed away in 2008, penned a final memorandum a few years before his passing entitled “Financial Chaos”, in which he predicted bad things ahead for us.
A very sharp final call from a guy renowned for them throughout his career. Here are the prescient comments that Sir John left us with:

Financial Chaos – probably in many nations in the next five years. The word chaos is chosen to express likelihood of reduced profit margin at the same time as acceleration in cost of living.

Increasingly often, people ask my opinion on what is likely to happen financially. I am now thinking that the dangers are more numerous and larger than ever before in my lifetime. Quite likely, in the early months of 2005, the peak of prosperity is behind us.

In the past century, protection could be obtained by keeping your net worth in cash or government bonds. Now, the surplus capacities are so great that most currencies and bonds are likely to continue losing their purchasing power.

Mortgages and other forms of debts are over tenfold greater now than ever before 1970, which can cause manifold increases in bankruptcy auctions.

Surplus capacity, which leads to intense competition, has already shown devastating effects on companies who operate airlines and is now beginning to show in companies in ocean shipping and other activities. Also, the present surpluses of cash and liquid assets have pushed yields on bonds and mortgages almost to zero when adjusted for higher cost of living. Clearly, major corrections are likely in the next few years.

Read the rest of Sir John Templeton’s memo at Newsmax.
The Amount of Managed Money Currently Invested in Gold
Now that gold is rangebound, how do you make money trading it? That’s easy – treat it like a wooden pony and straddle that thing.
For the details on this trade, in more professional terms as well, check out Brad Zigler’s article for Hard Assets Investor:

So what’s an investor to do? Well, you can certainly sit tight and wait. But if you do, you’d be passing up an opportunity the market doesn’t hand out every day—cheap volatility premiums.

Option traders know all about volatility: It’s one of the primary drivers of option costs. When volatility contracts, as tends to happen in range-bound markets, option prices soften. So much so, in fact, that the purchase of option straddles and strangles becomes attractive.
A straddle is a combination of a put and a call on the same asset, each sharing the same expiration date and exercise price. A strangle is similar, but the options’ strike prices are different.
You can read Brad’s full piece here.
The potential risk here, at least IMHO, is if the next potential wave of deflation finally comes to fruition, taking down everything, gold included.
But if you believe that gold will be rangebound for a bit here, straddles are definitely an interesting potential play.
And here’s a VERY interesting chart that Brad posted in his piece – it shows another reason some smart money is wary of gold at these prices – because managed money is heavily in gold right now, which often indicates a shorter term top in price: 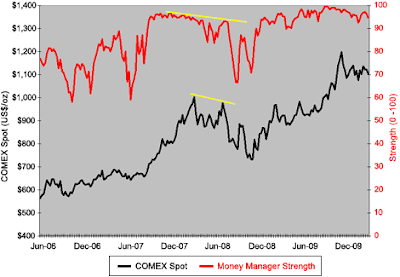 Chart courtesy of Hard Assets Investor.
Gold has had a heckuva run, it could easily trade sideways, or even pull back sharply, and still be within the confines of a larger bull market. Nothing goes straight up or down – trade accordingly!
Why Richard Russell is Very Worried About the Bond Market
Richard Russell thinks the bond market may be saying ENOUGH with the quantitative easing, reports The Daily Crux.
From his Dow Theory Letters:

The bond market is now very close to saying, “We’ve had enough.”

… Many older subscribers probably remember my lifelong emphasis on the POWER of COMPOUNDING. But what of the power of negative compounding on debt? I think we are about to find out.

The power of negative compounding will be brutal. The cost of carrying the world’s debt (including the US national debt) will be devastating. It will be highly deflationary and it will crush everything in its path.

You can read Russell’s full commentary here.
I don’t subscribe to Russell, but I do try to follow his writings and thinking as best I can from the outside, and this is the first I’ve heard him mention deflation. Very interesting!
Here’s what Russell had to say in early December about gold, the dollar, and the Fed’s effort to re-inflate.
An Ominous Short-Term Chart
Anytime in history that the 12-month rate of change in the Dow Jones Industrial Average has topped 40%, there’s generally been trouble ahead.
Guess what? The DJIA’s 12-month ROC is above 40% right now!
Here’s a great chart from Michael Panzner that you should check out:
http://www.financialarmageddon.com/2010/03/time-for-the-bulls-to-reconsider.html
The Magic of Obama’s Healthcare Plan
Looks like I’ve got to eat some crow here – I’m on record as suggesting that Obama’s Healthcare Plan would expedite the insolvency of the Federal Government.
Boy was I ever wrong!
Check out this hilarious video of Obama’s magic healthcare math, where he rocks the stage in Ohio by speculating that insurance premiums could fall by up to – get this – 3,000%!
A Few More Links, In Case You Missed Them
My Current Positions and Market Outlook
The trend of all markets still appears to be up, but the risk appears to be predominantly to the downside. The only trend that appears to have changed for certain is that of the dollar, which is currently taking a breather after a multi-month rally.

The US dollar’s trend is officially UP. It’s well above it’s 200-day moving average.
(Chart courtesy of StockCharts.com)
If the dollar is indeed the linchpin of the financial equation, then we’d expect the other markets to roll over one-by-one in turn here. We shall see if things play out this way.
(PS – Here’s why I concur with folks who believe the dollar is the linchpin of the global financial markets).
Currently I am in wait and see mode, with no long or short futures positions.
Have a great week in the markets!