The Case for Shorting Long Dated US Treasuries Right Now

Editors note: Further discussion of this topic and article can be found on SeekingAlpha.com.

I believe that long dated US treasuries are one of the worst investment options available right now. Should we short them? Let’s examine the evidence:

Exhibit A: US government debt continues to baloon

I wondered last month why the rest of the world will continue to lend money to the US at 3%+ percent, while our government spends money like drunken sailors. Someone on Seeking Alpha even hilariously asked me what drunken sailors have ever done to me to earn such an insult.

Basic lending 101 dictates that the higher risk of defaulting the prospective debtor appears to have to the creditor, the higher the interest rate the creditor will demand. And right now, our government is behaving like a banana republic government.

Exhibit B: Long term interest rates are below the current rate of inflation

The 10-Year Treasury is currently yielding 3.936%. Official CPI calculations are running around 5%, and in reality probably higher than that. According to John Williams of Shadow Stats, using the pre-Clinton era method of calculating the CPI, inflation is north of 8%.

What kind of investor commits to a long term investment that is guaranteed to lose money?

Tom writes in the October 17th edition of Daily Wealth: “My concern is, if this credit crisis gets worse, it’s going to trigger even bigger whales to liquidate their Treasury bond holdings… whales like the Chinese, the Japanese, or the oil exporters.”

It’s tough to argue with Jim Rogers. Here he is on Bloomberg on September 10, 2008 – he mentions his short US Treasury position at the 9-minute mark.

Here’s a clip of Doug on Fox Business back on August 14 (mentioning interest rates at the 2-minute mark).

Exhibit F: The US government must print money as fast as it can

Somebody has to pay for all of these stimulus/bailout/rescue packages – and there are only two ways our government can raise the money needed to cover these:

I think we’ll see a bit of both, but raising taxes will be challenging in this bleak economic climate. I believe the printing presses are already humming quite loudly.

Exhibit G: Treasuries have started a downtrend over the past two weeks 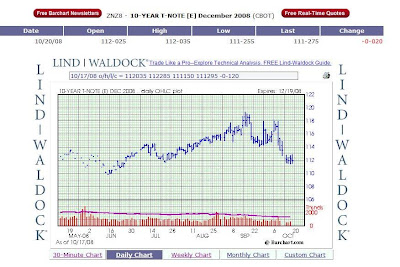 This is especially telling because, based on the action of the equity markets, you would have expected to see investors piling into US Treasuries over the last two weeks. Instead, they behaved quite poorly in the context of the broader economic picture.

It appears that a downtrend in 10-Year Treasuries has begun.


Conclusion:
I believe long-dated US treasuries are ripe to be shorted. I have begun to build up a full short position via the futures markets, and intend to increase this position over time as interest rates rise.

I would recommend readers avoid financial positions that may be vulnerable to rising interest rates.

Ironically, this may in fact be an argument for diving back into the real estate market before it bottoms. A long-term mortgage locked in around 6% will be quite desirable if interest rates spike to their highs from the early 80’s.

Aggressive investors can look to profit from rising interest rates by shorting long-dates Treasury or Eurodollar positions via the futures markets. Alternatively, there are several ETFs that inversely track interest rates – DXKSX is the one I own in my Scottrade account, because it provides 2.5x leverage.