The Bear Gains His Grip – On Everything. Again!

The trend is your friend
But it’s still a bear market
So the trend is down!
Closing in on the 200-Day Moving Average
Last week, I mused that I thought the markets had turned down, but that we’d need to respect the moving average before being 100% sure.
We’re not there yet…but we’re gaining ground fast: 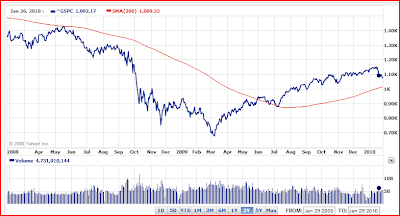 The S&P looks destined for a date with its 200-day SMA.
Note that the moving average is very good at catching the meat of a move, but is not good at catching turning points.
For example, if you’d have been waiting for the upward break through to get long in 2009, you’d have missed nearly 300 points of the S&P’s move up.
Still, you’d be sitting on profits right now, and, perhaps more importantly, you’d have a stop-loss waiting for you that would lock them in.
The markets are oversold right now, but during bear markets, that condition can occur for quite some time.
We’ll try to identify a couple of things in particular in the weeks ahead, namely:
Another Good Short: The Euro
As crazy as the US indices look at these levels, it’s hard to see anything attractive about the Euro at these levels.
Fundamentally, it’s quite overvalued when compared with the Dollar. It appears to be at the start of a major downtrend, in perfect accordance with the markets throwing up all over themselves.
AND, with the Dollar continuing it’s ascent, the Euro looks poised to get trashed in a big way. As big of a mess the US is, Europe is arguably an even bigger basket case. The Euro could easily revisit parity with the dollar at the end of this move.
Bearish Venture Capitalists
On Thursday night I attended a technology startup discussion, featuring three Bay Area venture capitalists on the panel. It was a very good lineup, with one guy in particular that I enjoyed and seemed to identify with (perhaps it was his “get out of our way, government” mantra).
He brought up an interesting point that many stimulus funds will dry up by the end of Q1, at which point the next shoe could drop. I thought that’d be a perfect fundamental backdrop against the technical warnings we’re seeing right now.
You know the math – the markets turn down, and then the fundamentals reflect the technicals. Pundits will say that the market is a “forward looking mechanism”, hence it discounts improving or deteriorating fundamentals 3-6 months ahead of time.
Personally I find that to be bogus business school logic, as I prefer to think that rising asset prices eventually are reflected in rising fundamentals, which is a more logical sequence of cause and effect than the crystal ball theory.
In any case, with markets starting to circle the bowl, the evaporation of stimulus money in 3-6 months would be the perfect fundamental “reason” for another downturn, that appears to be starting right now.
Not Good When Stocks Drop After Good “News”
Good friend Brian Hunt has been on the Intel beat for the past 16 months – he’s been using INTC’s stock price (quite successfully) as a leading indicator of where we’re heading.
On Tuesday he pointed out in his Market Notes that the “short term circle is now complete.” Last April, Intel reported bad news, and the stock shot upwards. Last week, Intel reported great news, and the stock was subsequently hammered.
Interestingly the business fundamentals look great at Intel – perhaps another justification that the fundamentals are often the last ones to go.
Anyway the INTC worm appears to have turned, which is another foreboding short-term sign.
China Starts to Slam on the Breaks
We’ve wondered before how the global economy would fair if China, the posterchild of world economic activity, faltered.
Quietly, Chinese markets peaked last October. And now, the government is trying to tap the brakes on this economy.
I don’t see how this can end well, at least in the short-term. And the folks at Stratfor are raising the same questions:
Fine Dining Turned Cafeteria Comfort Food
Think good times are back? Think again.
Granted my hometown of Sacramento will never be confused with San Francisco or Manhattan, but it does boast a small but impressive lineup of fine dining.
That lineup will soon be reduced by one, as the owner of Mason’s New American Restaurant has (wisely, I believe) decided to trade in the silver spoons for Sloppy Joe’s.
As this depression unfolds, I’ll bet we’ll see more fine dining establishments rebrand themselves as cafeteria-type establishments…hopefully without the tasteless steamed vegetables.
Because that’s how things roll, here in Lunch Lady Land:

My Trading Activity – Still Short the S&P
Still looking good on the short S&P trade. This position looks like a keeper.

Short the S&P – this time it’s working out, so far.
Would love to add to this, but I’m still not 100% convinced that this turn down is The Big One. I think it is, but am waiting for a breach of the 200-day SMA as the “oh shit” point.
Shorting the Euro, and alternatively going long the Dollar, would also appear to be good trades. They are “all the same trade”, after all!
Have a great week in the markets! Comments are always welcome and very much appreciated.