Sugar is quietly staging an impressive rally off its October lows, when it briefly dipped below the 11-cent mark.  Since then, we can see that sugar prices are clearly moving from the “lower left to the upper right,” recently hitting a 5-month high. 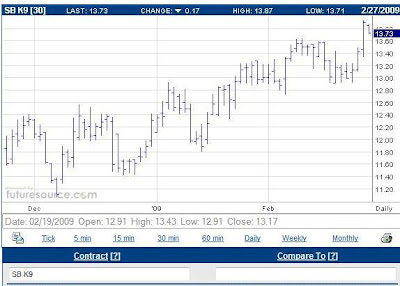 Is it time to buy sugar?  I think so.  Fundamentally, there are a number of bullish factors lining up:
What could dampen demand for sugar?  Low crude oil prices could reduce the demand for sugar to be converted into ethanol.  Sugar into ethanol is profitable at about $50 oil.  So while a rally in oil could send sugar prices higher, continued low oil prices may weigh on sugar.
Also important to note that President Obama does not appear to be in favor of sugar based ethanol for our energy needs.  Obama did very well in the Midwest, including his win in Iowa in the primaries, and appears to be set on finding energy solutions that can be harnessed right here in the USA, such as ethanol from switchgrass.
Other potential trades to watch: