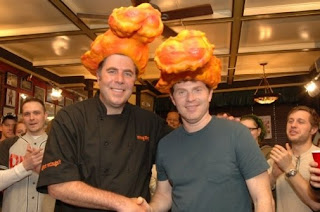 Reason being, restaurants have cut back on their orders for higher priced chicken breasts in favor of wings, which are more perceived as a “cheap luxury”, according to the article.
Higher demand, coupled with falling supply…you know what that means – higher prices!
In the interest of full disclosure, I must reveal that I actually have wing royalty in my blood – Drew Cerza, the Buffalo Wing King, and founder of the Buffalo Wing Festival (pictured next to Bobby Flay above), is my uncle. I have not yet connected with Uncle Drew for the inside story on the price boom in chicken wings – but when I do, you’ll be the first to know, dear reader!
Perhaps its time for us to look into a futures exchange for wings…imagine what’ll happen when the Chinese have their first bite! They’re already crazy for KFC…imagine what a real wing with some Frank’s red hot sauce dripping off it will do…mmmmm…
Hat tip to my buddy, wine expert, and honorary Buffalonian Doug for sending this piece along.