Return on Capital? How About Return OF Capital!

I’ve come to the conclusion that in roughly March of 2008, the general tide shifted from inflation to deflation for the first time since World War II. Since that shift, everything we have seen has been pretty much deflationary.
Oil is half of where it was about a year ago. Ditto for corn and soybeans. Gold, after pushing $1,000 last summer, is now languishing just above $900.
The dollar, meanwhile, has rallied – and is perched much higher than it was a year ago. And that’s after a year of solid “quantitative easing”…who would have guessed!
What I’m getting at is that the common wisdom last summer was that the dollar was screwed, and that we’d see deflation for a little bit, then wild inflation as a result of the money printing. I bought into this hypothesis whole hartedly myself…it seemed to make sense. Perhaps too much sense.
Well I can now safely say that I was either early, or wrong – and in trader’s parlance, that’s the same thing!
I thought that if inflation reared it’s head, the commodity markets would be the first to know about it. And a few months ago, I thought we may have been experiencing a mini inflationary boomlet.
Now in retrospect, perhaps this was all just a standard fare bear market bounce.
In any case, I now can’t find anything that indicates we’re not still in a deflationary environment. Gold, as mentioned, can’t break through $1,000. Wake me up when that happens.
And the US dollar…maybe the sickest currency in the history of the planet…actually is behaving just fine. Can you believe that? 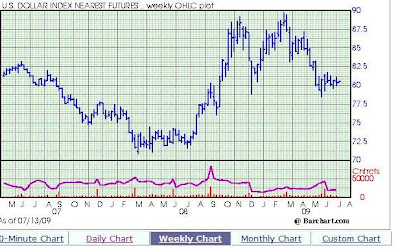 The US dollar looks…just fine, actually!
(Source: Barchart.com)
Folks, I never thought I’d say this…but I think cash…specifically US dollars…are the place to be for the moment.
Now I could be wrong – I’ll be the first to admit. So how will we know? If the dollar starts to really fall out of bed, it’s crucial that we have our fingers on the trading triggers. A move down could happen swifty and violently.
But until further notice – I think the trade to be in…is no trade at all. Just cold hard cash.
Right now, it’s all about “Return OF Capital” – it’s the new “Return On Capital”…for the 4th Turning!
Quick Reader Survey – Please Share Your Thoughs!
I tossed together a quick 3-question reader survey, and I’d appreciate it if you could take a minute or two to share your thoughts and suggestions with me using the survey link here.
It’s always great to connect with you, and your feedback and input help me figure out where to focus my energies…namely on stuff you like, and stuff you’d like to see more of.
The Week’s 3 Most Popular Posts…
Positions Update
Got killed this week…and I am out! Here’s my new positions…so much for diversification: 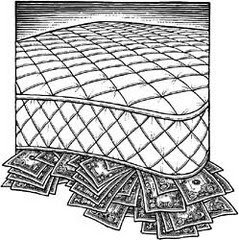