From London’s The Independent comes the latest report of the dollar’s impending implosion – in an article fittingly titled The Demise of the Dollar.
In the most profound financial change in recent Middle East history, Gulf Arabs are planning – along with China, Russia, Japan and France – to end dollar dealings for oil, moving instead to a basket of currencies including the Japanese yen and Chinese yuan, the euro, gold and a new, unified currency planned for nations in the Gulf Co-operation Council, including Saudi Arabia, Abu Dhabi, Kuwait and Qatar.

Secret meetings have already been held by finance ministers and central bank governors in Russia, China, Japan and Brazil to work on the scheme, which will mean that oil will no longer be priced in dollars.

I’ve read a few publications jumping all over this story today – the sky is falling, the dollar is doomed!
Have to say I’m skeptical. Governments are the ultimate investment herd! This is another great cue that the dollar has indeed put in a major bottom.
The dollar is showing some resiliency around the 76 mark. Time will tell if this latest “demise of the dollar” story is as ill timed as many from recent history. 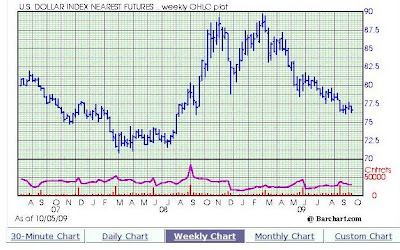 You wouldn’t know it from reading the news headlines…the sickest currency on planet Earth is still comfortably above its 2007 lows.
(Source: Barchart.com)