http://www.nbc.com/saturday-night-live/video/clips/update-scrooge-mcduck/1165594/
Shout out and thanks to my good buddy Super Joe for sending this one along!
New Reports of the Dollar’s Demise: Greatly Exaggerated?
From London’s The Independent comes the latest report of the dollar’s impending implosion – in an article fittingly titled The Demise of the Dollar.
In the most profound financial change in recent Middle East history, Gulf Arabs are planning – along with China, Russia, Japan and France – to end dollar dealings for oil, moving instead to a basket of currencies including the Japanese yen and Chinese yuan, the euro, gold and a new, unified currency planned for nations in the Gulf Co-operation Council, including Saudi Arabia, Abu Dhabi, Kuwait and Qatar.

Secret meetings have already been held by finance ministers and central bank governors in Russia, China, Japan and Brazil to work on the scheme, which will mean that oil will no longer be priced in dollars.

I’ve read a few publications jumping all over this story today – the sky is falling, the dollar is doomed!
Have to say I’m skeptical. Governments are the ultimate investment herd! This is another great cue that the dollar has indeed put in a major bottom.
The dollar is showing some resiliency around the 76 mark. Time will tell if this latest “demise of the dollar” story is as ill timed as many from recent history.
Non-Confirming Charts
If you’re a trend follower, you love to see something making an all-time high, like gold is today. All bets are off, as who knows how high it will go! Just go long and hang on.
And while I do respect and try to follow trends, the reason I’m not jumping on the gold bandwagon right now is that it seems quite crowded. I could be wrong – it could be like tech stocks in 1998, where the fun was just getting started.
But it seems strange that gold is making new highs all by itself. Check out oil, which is still below its highs for the year: 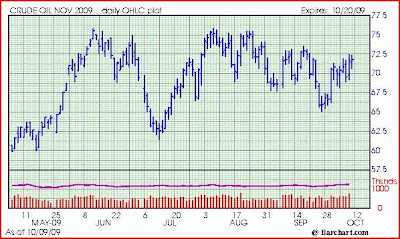 Crude oil can’t break $75 decisively.
(Source: Barchart.com)
Perhaps this is an indictment on the global economy. You know investors are taking a defensive stance when they favor an asset in gold that doesn’t really do anything, over the black goo that powers the global economy.
Also of note, silver has not yet confirmed gold’s record highs. Silver still sits solidly below its 2008 highs – not to mention it’s all-time high in the $50 range. 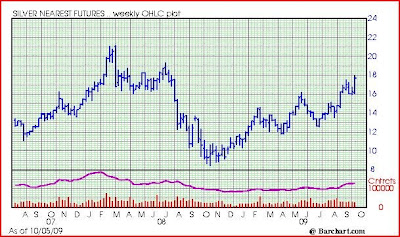 Silver still hasn’t broken its 2008 highs.
(Source: Barchart.com)
But the thing that puzzles me the most – so much so that I wrote a haiku about it on Friday – is the long bond.
If we assume that gold is rallying on inflationary fears and money printing – fine, I can accept that as a plausible explanation. But then why are interest rates on long dated government not skyrocketing? Why are rates on the 30-year not barreling towards double digits?
For the past two plus years, the most obvious short in the investing world has been long dated US government debt. In fact, this short has been such a “sure thing” that it couldn’t have worked out any worse for investors who put on this trade – myself included! Though I can’t feel too bad when even the great Jim Rogers got burned as well.
Bottom line: If gold is rallying on inflationary fears, then why are interest rates not following suit? Someone please enlighten me! 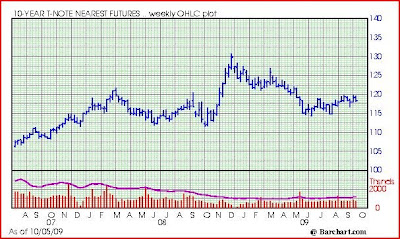 The most obvious short on the planet…only problem is that it’s not going down!
(Source: Barchart.com)
Some More Good Reading
Positions Update – Still Long the Buck
And still waiting to see where the next move will be. With sentiment so low I’m guessing it’ll be up.
The appears to be the lynch pin to the markets, so it will be interesting to see, if it does rally, what the other markets do. My guess is that they’ll tank in unison. We may find out soon! 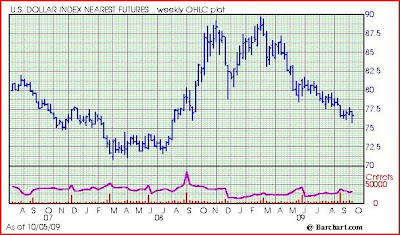 Reports of the dollar’s demise have, until now, been greatly exaggerated.
(Source: Barchart.com)
Open positions: