Is it (Gasp) Time to Short Gold? This Week in Commodities

Daily Crux Editor Brian Hunt reports that bullish sentiment for gold in investment newsletters is very high – “near extreme levels that marked the previous three tops in gold.”
When everyone is bullish, that’s trouble for longs…at least in the short term.
Need another data point? How about an insurance company hopping on the gold bandwagon!
The Crux also reports:

Northwestern Mutual, the third-largest U.S. life insurer by 2008 sales, bought gold for the first time in the company’s 152-year history.

Gold is already down over $20 since these reports came out. Perhaps the old addage “sell in May and go away” should now be heeded. Short term traders may want to stay on the sidelines gold winds up for another run at the elusive $1,000 this fall…when it is seasonally stronger. 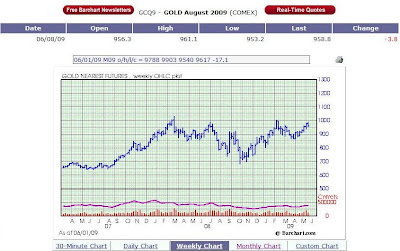 Gold keeps bumping its head on the $1,000 ceiling.
(Source: Barchart.com)
Dollar Rally Overdue
The dollar is a bit oversold as of late, and appears to be due for a short term pop. This may have begun last week. How long and far this will go is anyone’s guess – but I’d imagine it won’t last for too long.
The long term trend of the US dollar is unmistakeably down. Check out the chart below for a little perspective – since 2002, it’s been a fairly orderly march downwards for the dollar: 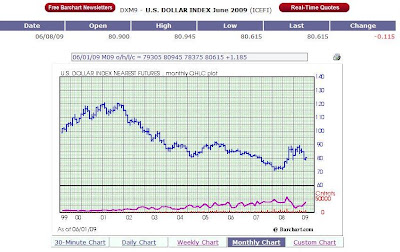 The long-term trend of the dollar is still down.
(Source: Barchart.com)
Sure puts the recent dollar rally in perspective, doesn’t it?
With fundamentals worse than ever, it’s hard to picture the dollar mounting a sustained offensive.
The Fourth Turning…Am I Insightful, or a Complete Dumbass?
My review and discussion of The Fourth Turning last weekend has sparked quite the discussion over at Seeking Alpha. Some folks enjoyed the review, while others think I need my head examined! Let us know what you think!
Subscribe By Email
We now have a couple of email subscription options. You can subscribe to these weekly posts by entering your name and email into the form at the end of this post. Each week I’ll ping you a copy of this post.
In addition, you can subscribe to all posts by using the form on the left side…just below the ads. This is managed by Feedburner – each time we post, you’ll receive it via email.
In Case You Missed It…This Week’s 5 Most Popular Posts…
Positions Update
This week would have worked out fine for me, had it not been for…not just one…but TWO ill-fated attempts at pyramidding my Aussie dollar position.
Monday I added another position after the A$ began the morning strong. All looked good, until that evening, when I made the cardinal sin of checking the Asian markets! I panicked and sold the position.
Then later in the week, Australia reported strong GDP numbers (maybe not too strong, but certainly much “less bad” than much of the rest of the developed word). The A$ cleared $0.82, and seemed destined for $0.85!
So what happened? Profit taking and a rally in the US dollar! I had to cover and the A$ continued to drop, settling slightly down on the week.
Moral of the story – I had no business adding to this position, because I don’t have enough dry powder to comfortably take it on. “Sell to the sleeping point” is the old maxim, and I can sleep comfortably with one long position in the A$.
To mollify my inner need to pyramid, I did pick up another mini beans contract 🙂
Current open positions: