How Bad Will The Financial Crisis Get?

How bad can the current financial crisis get, and how long will it last?  Casey Research’s Chief Economist, Bud Conrad, tackles this question, crunching the numbers produced by two leading economists who took a broad sampling of banking crises.  The information is presented in an insightful and informative way as only Bud can.  I hope this helps round out your thought process about the depth of the current crisis.
Bad, Worse, or Worst?

An assessment how serious the current crisis is likely to get

It’s time to call the global crisis what it is: the worst financial collapse since 1929. That’s no surprise to subscribers of The Casey Report, who have been amply warned over the last five years. But now even government officials, after trying to ignore the facts on the ground for the last couple of years, are admitting the truth of the matter.

Now that it’s here, we turn our attention to trying to discern, “How bad can it get?” and “How long can it last?”

While such questions can never be answered with anything approaching absolute certainty, there are methods that can be used to assess what may lurk over the horizon. With that goal in mind, this article focuses on – and then expands upon – the recent work of two economists who painstakingly analyzed a substantial number of previous banking and currency crises in an attempt to derive potentially useful lessons. I have then taken their data and applied them to the current circumstances to see where we are, relative to those other experiences.

The data are from a study called “The Aftermath of Financial Crises” by Carmen M. Reinhart of University of Maryland and Kenneth S. Rogoff of Harvard University. In their study, the authors summarize the results of a broad sampling of banking crises, with between 13 to 22 crises analyzed for each of the variables.

The Reinhart/Rogoff study is based, in turn, on data extracted from an even more comprehensive study of events in 66 countries, titled “This Time Is Different: A Panoramic View of Eight Centuries of Financial Crises,” by the same authors.

I’ve summarized the findings from the latest study in the table below: 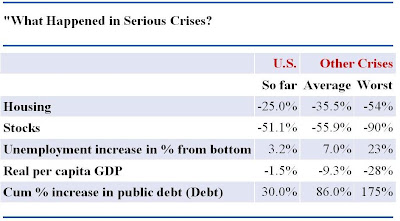 The economic measures in the left column show how far the U.S. situation has deteriorated so far. The next columns show the average historical deterioration and the worst case of the crisis analyzed.

I then applied these data to calculate the levels that the U.S. could reach if it followed the path of the historical examples. The projected level is based on the measure analyzed, either from the peak prior to the downturn (e.g., the S&P 500) or from the bottom prior to the downturn (e.g., the lows in unemployment). Thus, as you can see in the table here, the S&P 500 has already dropped from its October 2007 peak of 1565 down to 766. If this crisis were to end up being only “average,” then it would drop to 690.

If, however, the worst case of a 90% drop were to occur, as it did in Iceland last year, then the S&P 500 would trade down to the shocking level of 157. For further reference, if the current crisis were to cause the stock market to fall as sharply as in the Great Depression, the S&P would touch 469.

As you can see in the summary table below, it took 3.4 years, on average, for the stock market to fall from the peak to the bottom. In the worst case, it took five years. With the recent peak in the S&P 500 occurring in October 2007 – just one and a half years ago – the crisis is likely to have some time to go before reaching even an average duration. More specifically, if this crisis turns out to be just “average,” we would not expect to see the low before the first quarter of 2011. 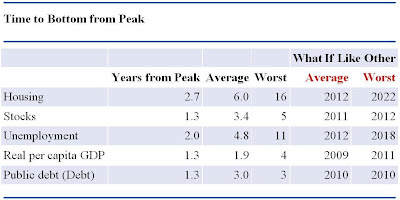 The global economic situation continues to deteriorate on all fronts (see charts below). 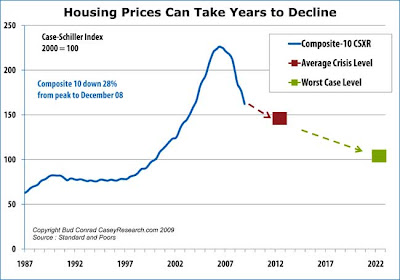 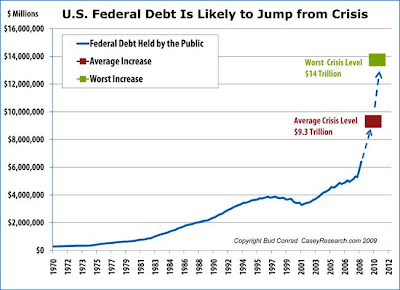 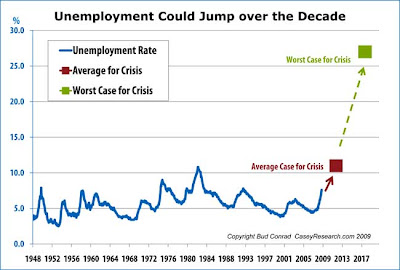 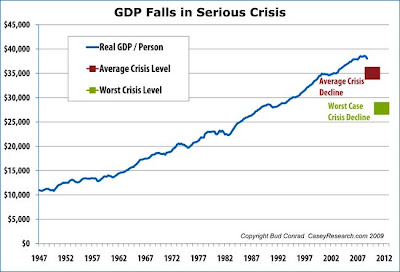 Housing prices are down 28% from their bubble peak in 2006 but still have a ways down to go to get back to their pre-bubble levels. Even an average downturn will mean that housing remains a problem for several more years. Unless, of course, the government steps in to stave off those resets… a “solution” that carries with it a separate set of problems, making things worse. We continue to expect very serious problems in the commercial real estate sector.

The stock market is approaching a 50% decline, the average of what has been observed in past crises. Further slowing in U.S. corporate activities and profits means additional increases in unemployment, establishing a negative feedback loop that pushes corporate profits – and stock prices – even lower.

The only growth trend at this point is in government bailouts, which are in high gear, indicating we’ll experience the serious growth of outstanding debt seen in other crises. The elevated levels of government borrowing required to fund that spending are absorbing all available credit from foreigners, directly competing with business in need of the new financing that will be required to expand the economy. The combination of declining business activity, coupled with declining levels of household income, will result in declining tax revenues, increasing the budget deficit beyond the size of the new bailout programs. State and municipal governments across the nation are already being confronted with large shortfalls in their budgets, shortfalls that will only widen as the crisis worsens.

The combined business slowing and jobs contraction assure that the GDP will decline. Components of GDP having to do with necessities like food and shelter will continue to bump along regardless of the economic conditions, but the lack of growth in GDP could extend for years as it did in Japan and as it did after the 1929 stock crash.

Given that we are currently in a deflationary phase, it is easy to dismiss the case for inflation – and many do. We think that is a mistake. Even a summary tabulation of the unprecedented increases in government debt at this relatively early stage in the crisis make a compelling case for higher inflation, if for no other reason than that it shows clear intent on the part of the government to spend “whatever it takes” to offset the deflationary forces now stalking the land.

The research paints a dismal story of years of economic stagnation. In our view, the trend is now firmly established for dollar debasement, a debasement that will eventually overwhelm the deflationary pressures from collapsing asset values. Therefore, don’t listen to the happy faces on CNBC spouting off, for the umpteenth time since this crisis began, that now is the time to jump back in and buy stocks. It isn’t.

Be extremely skeptical when you hear some pundit pronouncing that this piece of short-term good news or another is an “all clear” signal. Until we start seeing a systematic improvement in the economic fundamentals – for example, an upward movement in consumer confidence – the only signal the economy will be hearing is that of a runaway train coming straight at it.

The numbers paint a dark picture… but it is in crises like today’s where unusually good opportunities arise for investors. Take our investors, for example, who made money shorting financials over the last year. The Casey Report focuses on recognizing and analyzing market trends way ahead of the investing crowd – a strategy that has already provided its subscribers with up to four-digit returns. The latest edition includes an update on the analysis you’ve read above. Try it risk-free for 3 full months, with our 100% money-back guarantee: click here to learn more.