The next leg in the commodity bull market may have started, writes Jeff Clark of Growth Stock Wire.  “In the commodity sector, you don’t get a more bullish sign than when the 20-day moving average crosses over the 50-day moving average.”
Clark, one of my favorite traders, writes that the last time this happened, in September 2007, the CRB index rallied nearly 50% in 10 months.
Fasten your seatbelts!
G-20 Summit a Snoozer
Nothing noteworthy to report from the G-20 Summit, which is tantamount to a Woodstock for Government Bureaucrats.  All threats of pouting proved to be empty as the summit ended with a lot of self congratulating, and one of the most entertaining photos I’ve seen in awhile. 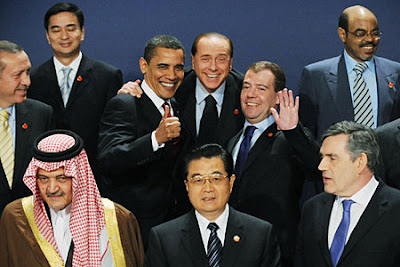 Our fearless world leaders folks – don’t you feel better about everything now?
Further reading: Stimulus Plans a Point of Contention at G-20 Summit
IMF to Sell Gold
It was announced at the G-20 summit that the IMF plans to sell some of its gold reserves.  While this could weigh on the price of gold in the short term, we don’t expect this to amount to anything more than a buying opportunity in the medium to long term.
Gold closed the week below $900 once again on this news, and renewed optimism in US equity markets.
Tax Havens Under Fire
Casey Research reports that tax havens may be under fire from the watchful eye of ever-increasing totalitarian governments, such as ours.  David Galland, Casey Research’s Managing Director, wrote in his weekly commentary that he walked into a Uruguay bank a couple of weeks back and casually inquired about opening an account.  The bank manager informed him that regretfully, they could not open an account for an American.  This is especially significant because Uruguay is very friendly to offshore capital looking for a home.
Many smart folks think exchange controls are on the way quite soon, as the US government will soon run out of income to tax and will begin going after savings and capital.  And to prevent you from moving your cash offshore, exchange controls will be in place to prevent this, or at least tax the hell out of it.
So if you do have a chunk of cash on hand in the states, now may be the time to seriously look at getting some of it offshore while you still can, as the noose of government appears to be tightening further.
China Swaps Currency Directly With Argentina
Finally, China and Argentina have agreed to a direct currency swap – exchanging Argentine pesos for Chinese yuan, without changing either into dollars en route.  This is a signifcant move, as it’s the first currency swap China has agreed to with a Latin America nation.
It indicates a mutual confidence on the part of both countries that each other’s currency will remain relatively stable and strong, and displays a lack of confidence in the US dollar to cut a side deal such as this.
Expect more direct currency swaps between China and other nations to come.
This news comes on the heels of our report from last week that China is slowly moving its reserves out of US assets – down to an estimated 64%, from a high of 84% in 2003.
Current Futures Positions
No trades this week – again!
I’m toying with the idea of refining my breakout criteria for entering a position.  I’ve been entering positions on 20-day highs (or lows if it’s a short) for the past year and a half.  Worked great when things were only going up, and crappy since, as I’ve gotten pulled into a lot of “false starts”.
So seriously considering bumping the entry up to a 40 or 50 day high.
Date Position Qty Month/Yr Contract Entry Last Profit