Gordon Brown appears to now have fulfilled his destiny as one of the worst leaders in the UK’s illustrious history, as he tossed the final nail in the coffin of a wheezing economy, courtesy of a budget that would make one of Ayn Rand’s villains blush.
Brown, like most politicians, appears to have read few if any history books, as he plans to tax top wage earners at 50%.  Those who believe that budgets can be balanced by soaking the rich are naive – capital, like water, flows downhill, according to the path of least resistance.  The exodus of capital from the UK will only accelerate as a result of these socialist taxation rates, and the UK will continue it’s slide into oblivion.
Don’t laugh too hard, fellow Americans, we’re not far behind.
To top it off, the UK’s budget plan is based on projections that have no chance in hell of coming true – calling for economic growth of 1.25% in 2010 and 3.5% in 2011.  I’ll parlay the under on those two picks, thank you very much.
One guy entitled to say “told ya so” is Daniel Hannan, the Brit who layed the smack down on Brown in Parliament a few months back.  Classic clip.
Other lowlights of Brown’s career, now that we’re piling on?  How about his massive sale of 60% of Britain’s gold between 1999 and 2002, essentially calling the absolute 20-year bottom for gold!  Earning him the hilarious nickname from the Casey Research folks “Goldfinger Brown.”
Brown’s party is almost a shoe-in to get voted out of office next year.  In the meantime, we’ll leave with this parting shot – the collapse of the British Pound under his watch.  Gordon, we hardly knew ye.  Please remember to write us often. 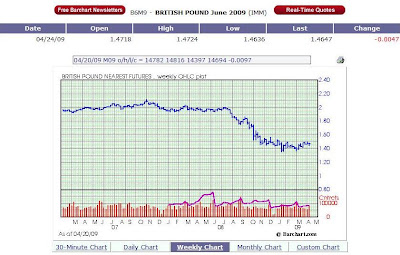