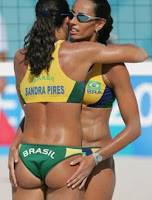 Who would have predicted the day when California would be paying it’s bills with IOU’s, while Brazil is stockpiling it’s reserves?

If you did, congratulations…and get ready to cash in that longshot ticket! Sean Hyman reports that Brazil’s debt rating is now inching higher than California’s plummeting credit rating.
In fact for some great insights on what may happen with California IOU’s, here’s what Steve Sjuggerud wrote today’s in DailyWealth:

The government of California is broke. If you’re unfortunate enough to receive California “patacones” try to get rid of them. Use them to pay your taxes, sell them to the knuckleheads on Craigslist… do whatever you can.

But don’t hold them. The historical record of broke governments issuing IOUs doesn’t offer much promise. The “reward” of 3.75% interest versus the risk simply isn’t worth it.

(Note: Steve writes an outstanding monthly newsletter called True Wealth, which is worth a serious look if you don’t already subscribe)
So how should you invest?
If you’re a California vendor getting paid with IOU’s – get rid of them! Sell them below face value if you must.
And if you’re looking for a play on Brazil, the Brazillian Real is not a bad way to go…it’s been on a tear this year. BZF is the ETF symbol…or you could also open a Real-denominated CD with Everbank.
Or even better…head down to the beach for some volleyball and sun 🙂