Is the Australian Dollar poised to climb again?  EverBank’s Chuck Butler believes the Reserve Bank of Australia may be done cutting rates, in anticipation of an economic recovery, and underpin a rally in the Aussie $.
In Chuck’s own words:

Yesterday, I told you that the Reserve Bank of Australia (RBA) had cut rates 25 BPS, and the A$ was recovering from the blow of a rate cut, but one that wasn’t as big as traders thought… Well, there was more news from the RBA, and their Gov. Mr. Stevens, who said that “the recession in Australia is much milder than those in Europe and the U.S.” Hmmm, I think he was preparing to leave the rate cut table, don’t you? To me, that’s Central Bank parlance for “This is it, no more rate cuts!” Which, if it’s the case, the A$ should begin to see some real activity…

Furthermore, any economic strength out of China could also help the Aussie $ as well. 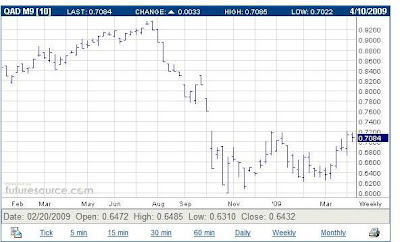 The A$ appears to be consolidating, poised for a potential climb.
Editor’s note: Everbank offers CD’s in foreign currencies, such as their New World Energy Index CD, which is 1/3 Aussie dollar, 1/3 Canadian dollar, and 1/3 Norwegian Krone.