Detailed Review of Foreign Investment in US (Hint: It’s Crashing)

In the inflation/deflation debate, there’s certainly no shortage of moving parts factoring into the outcome. Thus, I have to admit that although I’ve been leaning towards the deflation side of late, at the end of the day I don’t have a clue (nor does anyone else, honestly).
One strong argument on the inflation side is that there are just not enough foreign investors to choke down all of the US debt that is being flooded onto the market.
This is the first case of mutual assured destruction we’ve seen since the Cold War, this of the financial variety rather than the nuclear variety. If you think the long bond is toast, you’ll want to pay close attention to this piece, as our stellar guest author team of David Galland and Bud Conrad peel back the covers on the latest in foreign investment in the US.
And boy, it’s not pretty…
***

Foreign Investment in the U.S. – Going Down, Down, Down

By Bud Conrad and David Galland, Editors, The Casey Report
Here at Casey Research, we’ve been watching the actions of foreign holders of U.S. dollars as closely as a Las Vegas pit boss watches a card player on a $1 million winning streak.

Many of those in the deflation camp largely, or entirely, ignore the potential role these foreign holders may play in the drama now unfolding. But in fact, foreigners have, over the last decade, been by far the single most important source of buying for U.S. Treasuries.

Given the Treasury’s need to flog on the order of $3 trillion worth of its unbacked paper this year just to keep the government’s doors open – and that is a four- or fivefold increase over 2008 – the foreign buyers not only have to show up for the Treasury auctions, they have to show up in droves.

In mid-July, the Associated Press reported that “Foreign demand for long-term U.S. financial assets dropped by the largest amount in four months in May, as Japan and Russia trimmed their holdings of Treasury securities . . . foreigners actually sold $19.8 billion more long-term U.S. securities than they purchased in May. That compared with net purchases of $11.5 billion in April.”

Below you see the big picture of all cross-border flows in May as published by the U.S. Treasury. It shows both foreign investment in the U.S. and U.S. investment abroad. It includes Treasuries, agencies, corporate bonds, equities, and short-term instruments like T-bills. Foreigners bought a lot of T-bills when the credit crisis became acute. 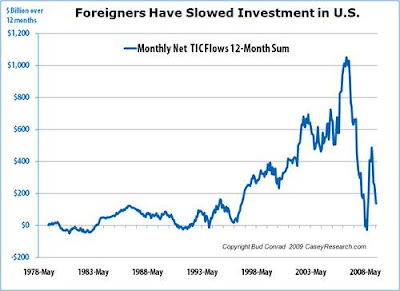 This should be a serious situation with a big drop in foreign investible funds for meeting U.S. borrowing needs. The borrowing by households and business has dropped close to zero, decreasing demand, while government borrowing has jumped but is still smaller than the private borrowing drop. The Fed has added some lending.

A look at just the longer-term Securities (not T-bills) is even more convincing of the slowing of lending by foreigners: 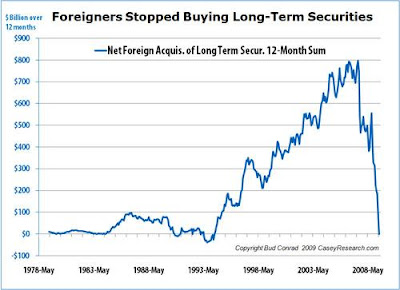 This decrease in credit should pressure rates higher.

And here is the breakdown of foreign investment into the U.S. Foreigners only continued to buy Treasuries, shunning new investment and selling off agencies in the riskier real estate market. 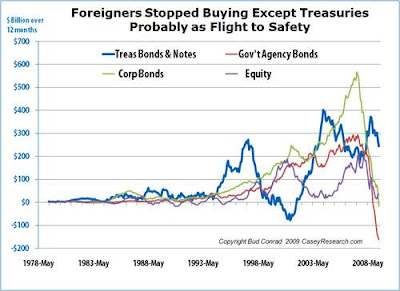 It’s not for nothing that the Goldman Sachs Secretary of the Treasury Timothy Geithner is hotfooting it around the world lately, last week to Saudi Arabia and the UAE… last month to China.

The purpose of his trip, Geithner told reporters in Paris, he was doing this tour ”to make sure we keep working with governments around the world to continue to provide enough support to lift this global economy back to a sustained pattern of growth.”

Translation: Look here, we’re all in this together. If you jump ship now, we’re all doomed… DOOMED, I say!

But the fact remains that the foreign holders of U.S. dollars have it within their ability – either deliberately or inadvertently as the result of a panic setting in – to literally destroy the U.S. currency.

The latest report shows Russia and longtime monetary ally Japan edging toward the door. China and the oil-exporting nations continue to convert an increasingly moderate amount of their trade surplus into Treasury bills – but not on a nearly large enough scale to meet the inflated (and inflating) borrowing needs of the utterly bankrupt U.S. government. And how long will they continue to show up, when an increasing number of other foreign buyers start selling their Treasuries? No one likes to be the last one to leave a party, especially when the bananas flambé has tipped over on the floor and the curtains are on fire.

Put simply, the only thing now standing between the U.S. dollar holding its own and an almost overnight debasement (and history has shown us that when things go wrong with a currency, they can go wrong very quickly) is the willingness of foreigners to play nice. This was never a threat that the Japanese had to deal with during the worst of their recent dark days, but it’s a very real risk here and now in the United States.

That that risk sits on top of the monetary inflation that has been the steady response of the U.S. government so far – and will continue to be its response as the economy further erodes – is not something to be sniffed at.

On July 17, Bloomberg reported that “China’s finance ministry failed to meet its debt-sale target for a third time in two weeks at a 182-day bill sale, according to traders at Galaxy Securities Co. and China Citic Bank in Beijing. The ministry had tried to sell 20 billion yuan of bills and only sold 18.51 billion yuan, traders said. The average yield for the bills sold was 1.6011 percent, they said.”

Here’s our take on this news item: The problem from the Chinese government’s point of view is that they were not able to borrow as much money as they wanted, in the light that they are now spending at a very fast clip with a big stimulus program to keep their own economy (bubble?) growing. So how can they fund the spending? They can sell off the stash of foreign-currency-denominated holdings they are sitting on. That could mean Treasuries dumped on the world market.

There are other alternatives, like getting the People’s Bank of China to print up some new money for the government, which would inflate the renminbi (RMB) and decrease its international price and attractiveness. They might like to let the RMB fall to encourage exports and keep relative worker pay low on the world competitive scene. But they are also trying to make the RMB a world currency by itself, so they don’t want it to look weak and at risk.

Our guess is that they are selling Treasuries and not telling.

[Ed. Note: In latest news this week, Chinese Prime Minister Wen Jiabao said China “will use its foreign exchange reserves to support and accelerate overseas expansions and acquisitions by Chinese companies.” Jiabao called it China’s “going out” strategy. Going out (with a bang), though, may be a better description of what the U.S. will ultimately do.]

This is what The Casey Report, Casey Research’s flagship publication, does: spotting budding trends in the economy and the markets, and then devising ways to profit from them. A strategy that – as thousands of happy subscribers can vouch for – is paying off… and paying off big. Right now, one of our favorite plays, and surest bets, on the economic quagmire we’re in is an investment that is almost guaranteed to be a winner. Let Casey Chief Economist Bud Conrad tell you all about it in his free report. Click here to learn more.