Are we in a deep cyclical downturn, or the first few innings of The Greater Depression?
This is the question many investors are trying to answer, because this is what it all gets down to.  If we are “merely” in a deep recession – likely the longest and deepest since the 1930’s – then we should expect things will go from bad to less bad in the not so distant future.
This is key, because this is how you can make a lot of money investing – putting money in when things look really bad, but about to go to “not quite so bad.”  You can find some great values, and your downside is limited.
Problem is, this is the playbook everyone knows and is waiting for.  This is why the stock market typically starts to turn up around the middle of a recession – the stock market, being a forward looking vehicle, is able to detect when things are bleakest and about to become less bleak, and the ascent begins.  By the time sunny skies have reappeared, most of the easy money has been made.
So here we are – the end of March 2009.  We’ve been in a recession since December 2007.  The stock market began rallying a couple of weeks ago, despite economic news that still looks as bleak as ever.  So is this time to start buying undervalued blue chip stocks, following the play book that has worked so well over the past 25 years of buying good, quality stocks on dips?
I don’t think so – because, I believe (and this is just my personal belief) that we are in a depression, not a recession.
IF the government has done nothing since the start of this financial crisis in the summer of 2007, and IF bad banks and bad companies had been allowed to fail, then I think we would indeed be on our way out of this mess right now.  Sure the last 18 months would have been very painful, but we would have taken our medicine, cleaned out the system and excesses, and have transferred assets from the incompetent people to the competent people.
Instead, the market has not been allowed to reset itself.  The incompetent people have been bailed out time and time again, and the competent people have not been able to pick up market share due to one government intervention after another.
So we find ourselves digging deeper and deeper into this hole, with the Federal government determined to “do something” to help the situation.  We are repeating the mistakes of the Great Depression, of Japan in the 1990’s, and we are going to have financial hell to pay for it.
Despite the fact that no country has ever devalued it’s way to prosperity, the UK, Japan, Switzerland, and now the US are in a race to devalue their respective own currencies as fast as possible to juice their economies. 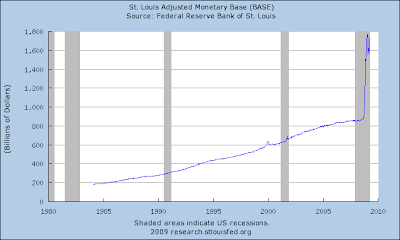 US Adjusted Monetary Base is skyrocketing (Source: St Louis Fed)
Meanwhile, US government spending is balooning as well.  (Hey why not print it and spend it).  Unfortunately there is no free lunch in life, and this is not really helpful for the economy, because the government does not actually produce anything of value.
There are only two ways the government can raise money:
Right now, we’re seeing a liberal applicaiton of both options.
The problem I have with this whole situation is that there doesn’t appear to be a free market anymore.  It’s more profitable for many businesses to angle for stimulus money than it is for them to build and sell something of value to the marketplace.  That’s a problem!
Now recently I’ve attempted to step back and look at the situation with a level head.  Morality and economic beliefs aside, the tax burden and government size of the US has no doubt been trending up throughout the entire 20th century.  And during that century, the US managed to do well economically.  So are things really that different this time?
Things looked pretty bleak in the 1970’s – how many would have predicted, at that time, the 80’s and 90’s would be so prosperous?
It’s an open question, and one that I think we investors must continue to mull.  Though things may look quite pessimistic now, there will eventually be another dawn, because we know one of the most dominant trends in the history of the world has been the ascent of humans.
But we also know that no trend goes straight up, trees do not grow to the sky, and right now the world is in the midst of a correction.  It’s imporant to remember that corrections can be quite long and nasty, and that markets can remain “irrational longer than you can remain solvent.”
As long as we continue to follow the playbook of the 1930’s, I think we must expect that we’ll get similar results.  As Mark Twain once said, history may not repeat, but it most certainly rhymes.  The past 25 years were an anomaly, a Pax Romana of sorts, where the US and much of the world experienced relatively peaceful, uninterrupted economic growth and prosperity.
History shows, though, that the world is often in turmoil and upheaval, and it’s prudent to at least stay mindful of the fact that good times may not return next month, next year, or even next decade necessarily.
There are glimmers of hope and positive signs to be found, and I’ll leave you with a must see video of Daniel Hannan laying the smack down on UK Prime Minister Gordon Brown.  It’s enouraging to remember that as bad as things may look, not everyone is asleep at the wheel, and there will eventually be a day for us to dust off our investing playbooks from the 80’s and 90’s.  Just not yet, though.
Editor’s Note: For a spirited debate on this topic, check out the comment stream on Seeking Alpha’s publication of this Greater Depression piece.
Current Futures Positions
No trades this week.  Personally I’m dealing with some “traders remorse” on the Japanese Yen trade, as the spike proved to be temporary.  However with the Fed now officially printing dollars, I intend to stay clear of the Forex markets for the foreseeable future.
Date Position Qty Month/Yr Contract Entry Last Profit