Can The Last Dollar Bull Please Turn Out The Lights? 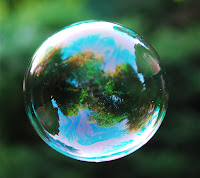 Over the past week, we’ve been investigating dollar sentiment, which appears to be overwhelmingly bearish at the moment.

I was surprised when our dollar sentiment survey revealed that only 56% of readers were bearish on the dollar. After seeing bearish readings north of 90% in some places, and anecdotal evidence to support these #’s, I was a bit surprised that our results weren’t as extreme.
Though astute reader MarketAddict pointed out that perhaps our readers are a bit more contrarian in nature, and thus the balanced opinion in our house poll.
Today in Growth Stock Wire, expert trader Jeff Clark sounded a Bubble Alert in everything except the dollar.

The problem now is everybody – and I mean EVERYBODY – is bearish on the dollar. It’s a doomed currency, and everyone is expecting its eventual demise. Of course, that was the case last December as well, just before the dollar kicked off a three-month rally that boosted the greenback 12% and sent stocks and commodities reeling.

From a contrarian point of view, a bottom in the dollar is near. Too many people are betting on its demise. And while they may eventually be proven correct, the market is likely to make them suffer in the short term.

We’re probably no more than a few days away from an important short-term bottom in the dollar, which means we’re probably close to a short-term top in the stock and commodities markets. Given the extent of the selloff in the dollar and the rally in all the other markets, a counter-trend move could be substantial.

I agree wholeheartedly with Jeff, and believe that we could be in for a powerful, sustained dollar rally coming up. So if you’re glancing longingly at gold, oil, stocks, and other “dollar hedges” – this is probably a wise time to check our emotions and channel your inner contrarian.
Ed. note: I’ll make a quick plug for Jeff’s premium trading service, The Short Report. It’s excellent – I’ve been a subscriber for several months now – worth checking out if you’re a serious short term trader. 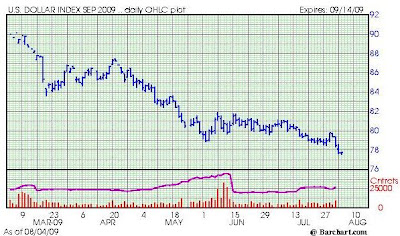 It’s not hard to be bearish on the dollar when you see this chart.
(Source: Barchart.com)