Breakdown of the Fed’s Balance Sheet…Wow, it’s Not Pretty!

Let’s join monetary expert Terry Coxon for a (comically?) detailed look at the Fed’s current balance sheet. I’ll give you a hint: yikes!
I’d rank Coxon as one of the foremost experts on monetary policy and its effects on the economy. You may recall his name from a classic book he co-authored with the great Harry Browne.
Coxon concludes that inflation will rule the day, because the Fed’s hand is being forced. By the way, if you are a Casey Report subscriber, go check the archives for the inflation/debate between Coxon and Bob Prechter. It was fantastic – one of the best things I read in the past 12 months. Something I’ve reread at least a few times over.
Please read on for some Fed insights from Coxon…
***

The Road to Zimbabwe 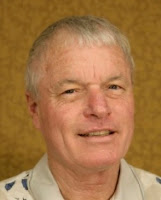 Sprinkled among all the official talk about efforts to end the current recession, you’ll hear assurances, notably from Federal Reserve Chairman Ben Bernanke, that when the economy does revive, it won’t be allowed to blast off into runaway inflation. The Fed, we’re being promised, will prevent such a launch by reabsorbing the hundreds of billions of dollars of excess liquidity it recently created to halt the credit crisis.
Delivering on those assurances won’t be easy. There is no reliable, real-time guide to how much cash the economy needs, so deciding when to drain excess reserves from the banking system (by selling off T-bills or other Fed assets) and judging how rapidly to do the draining will be largely guesswork. And the consequences of guessing wrong will be unforgiving. Drain too fast, and the recovery stalls. Drain too slowly and price inflation comes charging out of the chute.
Figuring out how much cash is just right for the economy has always been the Fed’s central puzzle. And until late last year, coming up with a workably close answer, day after day, was the only thing the Fed really needed to focus on. Executing its decisions was easy. Since it could create money, the Fed had unlimited power to expand liquidity by buying Treasury securities (or anything else). And since it owned a mountain of Treasuries built up from past purchases ($480 billion as of last September), it had the power to drain liquidity by selling from its holdings.
That Was Then…
That picture of the Fed’s power may be changing. Even if the Fed were to show unprecedented skill (or enjoy unprecedented good luck) in judging when to drain the excess liquidity that today is an inflationary time bomb, it might find itself without the wherewithal to do so. We can estimate how close the Federal Reserve is to such a trap by examining its assets and seeing how they compare with the excess “reserves” held by commercial banks. It is the excess reserves that the Fed will need to soak up at some point to prevent the time bomb from detonating.
I put “reserves” in quotes because they aren’t what you might think they are. They’re not money that banks put away as a provision for bad loans or for handling a surge in withdrawals. So-called reserves are more like the transmission fluid running through the machinery that the Federal Reserve uses to control the size of the economy’s money supply.
If a bank wants to issue demand deposits to its customers, by law and Federal Reserve regulation, the bank must hold “reserves” equal to 10% of those deposits. Only two things count as reserves – cash in a bank’s vault and deposits that a bank holds at a Federal Reserve Bank. The Fed can easily increase the total reserves available to banks by buying T-bills or other assets, and in ordinary circumstances it can easily drain reserves from banks by selling T-bills or something else. By altering the amount of reserves available to banks, the Fed alters their ability to maintain demand deposits for their customers, which in turn increases or decreases the M1 money supply.
The last time the Federal Reserve balance sheet looked somewhat normal (by historical standards) was in September of last year. Here is the asset picture from last fall, summarized. 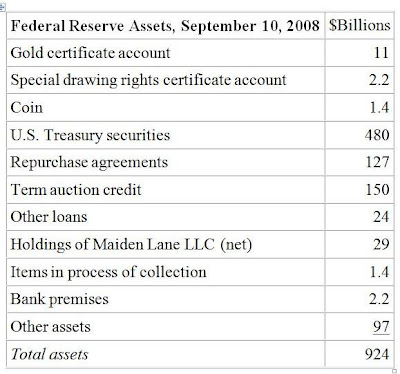 On the same date last September, the reserves of commercial banks and other depository institutions exceeded the legally required amounts by $22 billion. If the Fed had wanted to absorb those excess reserves, to keep them from feeding an expansion in the money supply, it would have had the means to do so – and by a wide margin. It could have done it in an instant by selling $22 billion of its $480 billion of Treasury securities. Or it could have done it overnight by refraining from rolling over $22 billion of its $127 billion of repurchase agreements. Between those two asset sources, the Fed had 28 times the power needed to mop up all excess reserves.
The Fed was more than well prepared. But it is noteworthy that if you examine the rest of the Fed’s assets, you’ll find that none of them would have been available for the job of smoothly absorbing excess reserves. In principle, the Fed had the option of refraining from renewing $22 billion of term auction credit – but that would have threatened the banks that were relying on the credit.
This Is Now…
The current picture of the Fed’s ability to absorb excess reserves is far different from last September, as revealed by the asset side of the Fed’s balance sheet at the end of July. 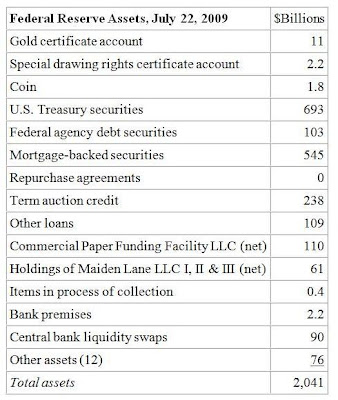 Notice that the asset total has more than doubled since last September, from $924 billion to $2,041 billion. The Fed engineered most of that increase by buying assets (most notably mortgaged-backed securities of dubious value) and lending to distressed institutions it considered too big to fail. It paid for all its new assets with brand-new dollars, which added dramatically to bank reserves and hence to inflation-threatening excess reserves.
On the same date, July 22, excess reserves were $744 billion.
That is a big and dangerous number. When the current recession begins to ease, short-term interest rates will rise from their current near-zero levels. Banks will then be in a hurry to lend or invest their excess reserves. Things would move fast. If the Fed did nothing, the big unloading of excess reserves might take just a few months.
Each dollar of excess reserves that banks lend or invest translates into about a $1.65 increase in the M1 money supply. So the $774 billion in excess reserves would translate into about a $1.27 trillion increase in M1 – which, in percentage terms, would be a springboard leap upward for the money supply, over the course of just a few months, of 76%. That would quickly produce catastrophic rates of price inflation – not as bad as Zimbabwe, for sure, but worse than a bad year for Bolivia or for other countries where llama herding is a key industry.
Total Fed holdings of assets it could use to mop up that $744 billion of excess reserves and avoid such a catastrophe — Treasury securities, agency securities, and repurchase agreements – rose modestly, to $793 billion, since last September. Thus today the Fed still has enough – but now just barely enough – easy-to-use assets to absorb the dangerous excess reserves.
So the Federal Reserve isn’t quite in a trap yet. It will still need extraordinary skill, rare good luck, clairvoyance, ESP, championship-level Ouija skills and a bat-like capacity to navigate in the dark to deploy its resources at just the right time and at just the right pace to avoid setting off a damaging, 1970s-style inflation. But it does have the resources – unless the problem of excess reserves gets worse.
Credit Crisis Phase II
What might add to the problem of excess reserves and make it unmanageable is Phase II of the Credit Crisis.
Today Phase II is just a maybe, a possible next round of bank troubles coming from bad commercial real estate loans and the resetting of interest rates on a bumper crop of option-ARM home mortgages. If Phase II arrives, the Federal Reserve will be forced to buy up another $1 trillion or so of toxic paper to once again haul the banking system back from the edge of collapse.
That would increase banks’ excess reserves by another $1 trillion without doing much to increase the Fed’s ability to eventually reabsorb the additional reserves. In that case the Fed would be in real danger of losing control over the money supply and getting caught in a hyperinflation trap.
The reckoning would come when the economy began to recover from the recession. At that point, dealing with excess reserves to prevent the money supply from rapidly doubling would be a matter of urgency. Lacking assets it could sell to absorb excess reserves, the Fed would have only one weapon left — the interest rate it pays on those reserves. By setting the rate high enough, it could discourage banks from lending the reserves and adding to the money supply.
But life would start to get very complicated for the average Fed governor. The interest rate that would make this work, for a while, would be the rate on Fed funds. But that rate would be rising with an economic recovery, and the Federal Reserve would be paying the rate on perhaps $2 trillion.
Where would the Fed get the money to pay its interest bill? Its primary source of income would be the pile of toxic paper it has been accumulating in trying to rescue the banking system. So the Federal Reserve would find itself in exactly the same position that ill-run commercial banks have been in since last fall — living on overnight credit and hoping that a portfolio of bad loans will somehow generate enough cash to cover the interest cost. Of course, if the Fed’s portfolio of troubled loans failed to produce enough cash, the Fed, unlike a commercial bank, would have recourse to buying time by printing still more money — but that would add further to bank reserves. You can see where the road leads. It leads to Zimbabwe.

Ed Note: Terry Coxon believes that runaway inflation is already baked in the cake, and protecting your assets from devaluation should be your number one priority. The Casey Report – a monthly must read for me – focuses on the big, emerging trends in the economy and markets, and how to profit from them, even in times of crisis. One of the developments they keep their eyes on is the coming rise in interest rates – a virtual inevitability – and the money-making opportunities it will present to our subscribers. Learn more here.