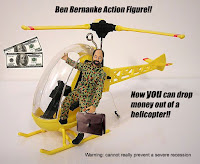 Looking for a contrarian indicator you can take to the bank?  Look no further than our faithful Fed Chairman Ben Bernanke.  In this guest piece, the folks at Casey Research revisit Big Ben’s Greatest Hits, while casting an eye towards investment opportunities that arise from taking the opposite of Ben’s words at face value.

When Bernanke Says All Is Well, It’s Time to Duck and Cover
By the editors of Casey Research

“We’ve averted” the risk of a depression, Federal Reserve Chairman Ben Bernanke said this week. “Now the problem is to get the thing working properly again.”

Appearing on CBS network’s 60 Minutes, Bernanke told correspondent Scott Pelley that concerted efforts by the government likely averted a depression similar to the 1930s. He also stated the nation’s largest banks are solvent and that he doesn’t expect any of them to fail; and that the U.S. recession will come to an end “probably this year.”
Is this finally the light at the end of the tunnel for the U.S. economy?
We don’t want to appear as perpetual gloom-and-doomers, but fact is, when Bernanke tries to predict the future, he’s usually wrong.
Prediction: The subprime mess is grave but largely contained, Bernanke reassured the Federal Reserve Bank of Chicago in a speech on March 15, 2007.
While rising delinquencies and foreclosures will continue to weigh heavily on the housing market, it will not cripple the U.S. economy, he said. “Given the fundamental factors in place that should support the demand for housing, we believe the effect of the troubles in the subprime sector on the broader housing market will likely be limited.”
Reality: The median price of a home sold in the U.S. fell to $170,300 in January 2009, down 26% from a year and a half earlier, according to the National Association of Realtors. This housing crash has spread pain more widely than any before it. Home prices fell about 30% during the Great Depression, according to calculations by Yale University economist Robert Shiller. But back then, the nation was less concentrated in urban centers, and much fewer Americans owned homes.
Other housing downturns in recent decades have been regional; this one is national. Prices in the fourth quarter of 2008 fell in nearly 90% of the top 150 metro areas, according to the Realtors group. And 5.4 million homeowners, about 12%, were in foreclosure or behind on mortgage payments at the end of last year. The Federal Reserve now estimates home prices could fall 18%-29% more by the end of 2010.
Prediction: “I expect there will be some failures” of smaller banks, said Bernanke in February 2008. “Among the largest banks, the capital ratios remain good and I don’t anticipate any serious problems of that sort among the large, internationally active banks that make up a very substantial part of our banking system
Reality: IndyMac Bank failed in July 2008, with $32 billion in assets. Washington Mutual failed in September 2008, the largest bank failure in history with $307 billion in assets. Wachovia was sold to Wells Fargo in October 2008, amid concerns about its financial health, and Citigroup still scrambles to raise cash from both the government and private sources.
Fortunately for Bernanke, and unlike us at Casey Research, he doesn’t make a living by being right about the future. If he did, we strongly suspect that by this time, he would find himself without subscribers.
Thus, it is a mystery to us why the mainstream media still seem to eagerly soak up his every word, much like a devout Catholic would absorb a papal ex cathedra proclamation. But until the last American has woken up to Bernanke’s fallibility, that likely won’t change.
In the meantime, we recommend using the Fed chair’s economic outlooks as a contrarian indicator – if he says the market looks good, run for cover as fast as you can.
***

Bernanke may be wrong more often than not and still keep his job – we at Casey Research cannot afford that luxury. Our subscribers depend on us researching, correctly analyzing, and predicting market currents and emerging trends… which also includes the movements and changing policy decisions of Big Politics.

Our fresh-off-the-presses, FREE special report Obama’s Newer Deal, Part 2 tells you all about the president’s Stimulus Plan, its impact on and implications for your personal life and finances. Don’t miss it – click here now!