In a story that will make any red-blooded capitalist, the Wall Street Journal reports that business are flocking to seek cash “from the biggest venture capitalist of them all, the US government.”
The DOE hopes to lend or give out more than $40 billion to businesses working on “clean technology,” everything from electric cars and novel batteries to wind turbines and solar panels. In the first nine months of 2009, the DOE doled out $13 billion in loans and grants to such firms. By contrast, venture-capital firms — which have long been the chief funders of fledgling tech firms, taking equity stakes in the start-ups that will pay off if they go public — poured just $2.68 billion into the sector in that time, according to data tracker Cleantech Group.

Thus, while much attention has been focused on the federal government’s involvement in banking, Washington also is gaining sway in another swath of the economy. By financing clean-tech ventures on a large scale, the government has become a kingmaker in one of technology’s hottest sectors.

So what’s wrong with a little help from Uncle Sam?

Some young companies are tailoring their business plans to win DOE cash. Private investors, meanwhile, are often pulling back, waiting to see which projects the government blesses. Success in winning federal funds can attract a flood of private capital, companies say, while conversely, bad luck in Washington can sour their chances with private investors. The result is an intertwining of public and private-sector interests in an arena where politics is never far from the surface.

So there are unintended consequences from government mettling? You don’t say!
Stories like this should scare the crap out of anyone who honestly believes the economy is improving. Stuff like this is bad business practices, bad morality – it’s bad, bad, bad.
Anyone remember how the USSR’s experiment with central economic planning worked out? 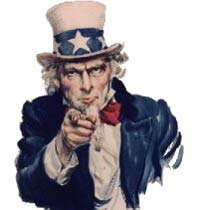 I want you! Actually it’s your business I want…and on my terms!