We now find our fallen (past) hero, Government Motors, nestled under the protective wing of the United States Government, sheltered from the harsh conditions of the “free market.”
Some folks actually believe this cover from reality is all that GM needs in order to right the ship, and, to borrow a phrase from REO Speedwagon and GM’s 2001 commercials, “Keep on Rollin’ ” once again.
I’m sure you’re stunned to hear that I’m a bit skeptical of this whole rouse! But lets go in with an open mind…could us free market snobs be wrong? Can GM remake itself?
Guest author Olivier Garret dives into the early “new” GM to see what the future may hold for the fallen giant…
***

A friend of mine mentioned to me that he was surprised that “bankrupt GM” was spending some serious advertising dollars to try to lure customers to its website.

My comment to him: It makes sense, if it is done properly!

Yes, it is often necessary for a distressed company to communicate with its customers (advertise) and assure them that the future is brighter. That said, GM appears to have it all wrong once again.

What brought GM to where it is today is a lack of focus on what mattered to its customers – while it was losing market share to competitors that built higher-quality cars at competitive prices and strived to anticipate what customers needed. GM tried to remake its image several times over the past 20 years… without ever changing.

You might remember the slogan “An American Revolution.” The fact is, GM was led by insiders and bureaucrats. They climbed to the helm of the corporate ladder, not because they were good leaders but because they were effective at corporate politics and financial management. While GM employs scores of very competent and dedicated mid-level managers and union workers, they never got a clear signal or a commitment from the top that the company’s culture had to change in order to survive. People then did what they do best: they tried to protect the status quo and retain their perks. It worked for many years.

Unfortunately, the world of manufacturing has changed, and the strategies that made GM the world leader between the ‘40s and ‘60s have not worked since then. The company has needed a complete makeover for decades, and yet it has failed to embrace real change.

In this respect, bankruptcy could be an incredible opportunity for General Motors to get a fresh start and leave the chains of its legacy behind once and for all. It would be able to focus on building a successful company around its best assets (many great people, some good products, and physical assets). If the company could commit to doing much more than just a financial reorganization, it would have a bright future ahead.

So I looked for visible signs of change at the “New GM,” its first post-bankruptcy communication with its customers.

But let me first summarize the key elements of a “crisis” communication campaign. To be successful, it needs to be:

– Focused on fewer models – the best – to make them even better;
– Committed to improved productivity, as it means more value for the same price;
– Run by people that truly love cars vs. accountants – Henry Ford was an industrialist that knew cars, lived and breathed them; Wagoner never inspired the same passion).
So, what is the initial verdict?

After I let the ads entice me to visit the new GM website, I landed on a page titled “Our Mission.”

Here are my impressions: The page I landed on was cold and boring, almost amateurish. Also, I did not get their “mission.” There was a bold statement saying, “Reinventing the company,” yet they talked about a new battery lab, the SAAB spin-off, and the Penske purchase of Saturn. No sign of excitement, passion, or true change. Note to GM: Talking about yourself does not engage your customers.

Alright, maybe I didn’t land on the page where GM meant for me to go first. So I checked the “Our Company” page… with the same sinking feeling.

Couldn’t GM marketers find a better picture of Fritz Henderson or a more engaging subject matter to tell me what they are going to do for me, their potential customer? By the way, Mr. Henderson has been with GM since 1984. Is he the guy that will change the culture of the company? Can he really make GM a leading carmaker after being part of the management team that took it on a downward spiral for a quarter of a century?

Oh wait! I can see that GM just appointed a new chairman: Edward Whitacre. He must be the inspiring new leader. Interestingly enough, Mr. Whitacre is a retired chairman of AT&T. He spent 43 years in the telecom industry; he hardly looks like a man whose life’s passion is cars.

A quick googling of Mr. Whitacre’s background tells me that he brings with him a real passion for technology (he didn’t even have a computer in his office at AT&T), the Boy Scouts of America (he was their national president from 1998 to 2000), and M&As (the highlights of his career in telecom). Not exactly the profile I had in mind for GM’s leadership at this point… oh well.

Further down on the page is an article on the GM/Segway joint venture. Clearly the new PUMA must be the answer to GM’s customers most pressing needs. To me, though, it looks like a rolling coffin that will at best serve a small niche of yuppies, or airport security staff, or municipal police force. Hardly what GM needs for a makeover. 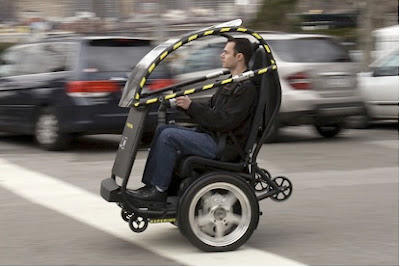 The next article tells me that the era of combustion engine vehicles is just about over. (If that’s true, why should I buy a car now?) But rest assured, even though the “New GM” may not have what I need today, it is working on tomorrow’s vehicles.

Well, if I remember correctly, GM’s competitors were the ones that produced the first commercially successful hybrids, while GM was promoting monstrous, gas-guzzling Hummers. Why should I trust that these guys now have a“feel” for the market? Do they truly understand where the future lies for this industry?

Maybe it is because President Obama stated that the American car industry will lead the green revolution and bring us the solution to the U.S. energy dependency problems. If I were Mr. Henderson and my job security were contingent on serving the wishes of my largest shareholder instead of the needs of my “potential” customers, my best strategy would be to pursue an all-electric vision. All I really needed anyway would be another five years before I could get full pension benefits guaranteed by the U.S. taxpayer.

My conclusion: Unfortunately, the first piece of communication from the “New GM” is all but reassuring; it fails all the tests for a successful crisis management campaign, leaving the visitor anything but excited about the struggling company. It leads me to believe that the “New GM” may have to file again shortly after emerging from its current “pre-packaged” bankruptcy. Alas, by that time, there will be a lot more job losses, and the brand will probably never recover.

I have been convinced for years that bankruptcy could save our domestic auto industry. However, I never had in mind a politically driven process like this – Washington technocrats and union leaders getting together and concocting this kind of an ill-conceived “solution.”

What I envisioned was a much more standard process where all the stakeholders put their claims in front of a restructuring team and a bankruptcy court. Then they collectively try to find the best compromise to move forward. They generally end up accepting significant losses but will vote in support of a plan that highlights a clear path to recovery and hope for future upside. In the absence of such a plan, they will push for liquidation and try to preserve the few assets they still have.

In some cases, the company cannot “remake” itself. Liquidation may then turn out to be the best thing that can happen. New owners pick up the pieces for ten cents on the dollar, and with a low-cost investment, they can start a truly new company focused on well-defined opportunities/customer needs. These new companies could again become icons of American entrepreneurship.

In either case, the American taxpayer would not be on the hook for tens or hundreds of billions of dollars, and the “New GM(s)” might have a chance to survive and thrive. Of course, this is not what is happening here. So, speaking with the legendary Mogambo Guru… second note to GM: You’re all freakin’ doomed.

All things considered, GM will most certainly not save the U.S. economy… or even be a part of it in the long run. And if you want to preserve and even multiply your assets, we wouldn’t recommend investing in GM – or any “blue-chip stock” – at this time. Instead, take a look at our Chief Economist Bud Conrad’s favorite investment of 2009… a play that is almost guaranteed to pay off handsomely this year. Click here to learn more.