Median Home Down Payments Rose to 22% in US

The median down payment in nine major U.S. cities rose to 22% last year on properties purchased through conventional mortgages, according to an analysis for The Wall Street Journal by real-estate portal Zillow.com. That percentage doubled in three years and represents the highest median down payment since the data were first tracked in 1997.

The move to force home buyers to lay out more cash is driven mostly by banks, who have found that larger down payments discourage delinquencies by increasing the buyers’ exposure to loss and reducing the impact of declining prices. Many home buyers placed little, if anything, down during the boom. 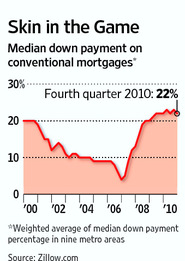 This could be a sign that the bottom in the housing market is nearer than bears – like me – have anticipated, as down payments appear to have rebounded to more reasonable, responsible levels.

Though there is that elephant in the room – long term rates.  If the bond vigilantes are truly circling, it’d only take another point or two increase in mortgage rates to send the housing market to its knees again.

Interest rates have spiked since Bernanke teed up the helicopters and printing presses for QE2 (Source: Barchart.com)

As for me?  I plan to rent for the foreseeable future – here’s why I’m down on home ownership.