Are Deflationist Arguments Still On Track? A Checkpoint in the Debate

Whither deflation…
Chased away by reflation?
Or eye of the storm?
Revisiting the Deflationist Arguments of 2009
Earlier this week I revisited two of my favorite inflation/deflation interviews of 2009, both courtesy of Jim Puplava at the Financial Sense Newshour. Being sympathetic to the deflationist arguments, I was interested in seeing if their forecasts were still on track, despite the relentlessness of the reflation trade.
Puplava’s interview with Bob Prechter was a classic. Prechter argues that the Fed cannot do anything to stop the powers of deflation, because most of the outstanding debt in the world is going to go unpaid. And that deleveraging process will occur faster than the fed can reflate the system.
In the September interview, Prechter correctly forecasted gold’s late year push, while expressing his belief that 2010 will be a banner year for deflation. In terms of timing, his thesis is still on track…he thought the shoe would drop late last year, or early this year.
As a subscriber and affiliate of his, it’s clear to me that he believes a turndown is imminent, as he’s aggressively laying his reputation out there right now, basically calling the top right here, right now.
In summary, the winner of the Puplava/Prechter inflation/deflation debate is still too early to call, though I anticipate the next few months will tip the scales one way or the other. I love Prechter’s bravado in trying to cement his legacy – we’ll see if it pays off for him!
Demographer Harry Dent was then interviewed by Puplava in October, where he shared his demographic research, and what he thought that meant for the financial markets. Dent made an extremely prescient call on gold, which was trading around $1,000 at the time of the interview. He said it’d be the last market to roll over, and that it could go quite high – even above $1,200.
When asked what could disprove his thesis, Dent mentioned the timing of the markets topping – he expects them to tank in the 1st half of 2010. If things are still humming midway through the year, Dent said he would need to re-examine their hypothesis, to see what they were missing.
So thus far from Dent’s side, things are also still inconclusive, but so far roughly mapping to his forecast from a few months ago.
Revisiting these two interviews was an instructive exercise. Because us market junkies follow things every day, and every week, it’s easy for us to grow impatient when things don’t turn our way quickly. And that’s often a big mistake, as you can go from being early, to being wrong, if you give up too early on a position.
So in summary, if you are a deflationist, as I am, I don’t yet see anything that doesn’t jive with the deflationist argument. Let’s hold tight, and see what the next month or two has in store for us. Nothing has been proven yet, either way.
But Aren’t We Missing Something?
Both sides of the inflation/deflation debate love to argue that the other side is missing one or more critical points.
I try to read as many opposing points of view as I can, to balance my thinking, though I have to admit that I find many inflation arguments to be a bit too simplistic.
But I just posted a solid guest inflation article today from Casey Research’s David Galland, appropriately titled What the Deflationists are Missing – and while I am a subscriber of David’s and think the world of his analysis, I thought it’d be fun to raise some counterpoints on “what we’re missing”.
While I don’t fully agree with all of David’s points, all of my counterpoints are merely academic at this point as well. As usual, the markets will be the final arbiter of who’s right, and who’s wrong!
So here are some excerpts from David’s piece in italics, with my deflationary counterpoints beneath:
Galland writes: For starters, there is already a massive inflation operation being run by the Fed, evidenced in a historic spike in the monetary base over the last two years. 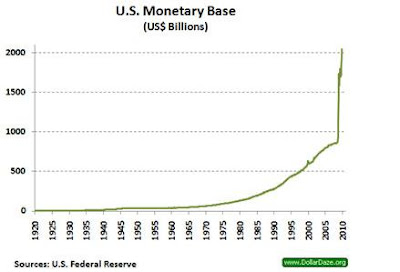 Yes, true, the Fed has increased the monetary base by a trillion or two over the last two years. BUT, a larger amount of credit was destroyed during the last market crash – 10 or 15 trillion dollars worth, depending on the source.
In that light, the Fed appears relatively powerless in their efforts to goose the money supply. It just can’t print fast enough when credit is being destroyed at a breakneck clip.
If you believe the global economy has stabilized, then perhaps the inflation argument holds water. But I think the real doom and gloom is yet to come, and that we’ve only seen the tip of the iceberg in terms of credit destruction!

In a deflation, the value of the money increases – which is actually a pretty desirable thing, if you ask me. Inflation, by contrast, means that pretty much everything you own in the local currency steadily loses value – forcing investors into a perpetual game of catch-up. It’s hard for me to calculate how the government can dramatically increase the money supply and yet have each of the currency units become increasingly more valuable over a sustained period of time.

Arguing against that point, Evans-Pritchard makes the case that the U.S. government is making much the same mistakes that were made in the first part of the Great Depression, i.e., being overly tight with the money. And that the velocity of money is falling.

There are a couple of key differences between now and then, however. First, the Fed didn’t actually know what the money supply was back then. They literally had no monitoring tools in place, mostly because no one thought it was important enough to track. Second, they didn’t have fiat monetary powers. Today, neither of those factors apply.
During the Great Depression, FDR was able to devalue the dollar overnight by 50% by confiscating gold, and resetting it’s price in dollars. This is not possible now, precisely because we have a fiat monetary system. The value of the US dollar is determined by the market everyday.
So while the Fed does have fiat monetary powers, and the theoretical ability to put as many dollars into circulation as it would like to, it is merely pushing on a string, because we have a credit based monetary system. Creating a trillion or two dollars out of thin air is not net inflationary when credit is being destroyed at a faster rate.
In fact, if the Fed swapped out all credit outstanding today, that wouldn’t even be net inflationary…it would be a break-even.
The Fed will eventually have the ability to inflate, but only after most of the outstanding credit has been destroyed. At that point, the Fed may not even exist – but that’s a speculation for another day.
There is something else that I think the deflationists are missing, and that has to do with confidence in the currency. If the U.S.’s many creditors come to agree with our point of view – that the dollar is being led to the altar as a sacrificial lamb to political expediency – then they’ll further reduce their purchases of our Treasuries and start trading their dollars for stronger currencies and tangible assets, including precious metals.
I agree that at some point, the bond markets are going to start rebelling against the fiscal profligacy in the US. But, I also don’t see how that is an inflationary event. If long term interest rates were to spike tomorrow, that would severely hamper the Fed’s ability to swap out bad debt. So instead of being propped up, that debt gets marked down to its true value – which is likely much lower than the value it’s being carried at on the books today – which is deflationary.
Much of the inflation argument hinges upon the Fed’s supposed unlimited ability to create new money out of thin air. But that type of activity can go on only as long as the bond market permits. And when the bond market screams “no mas”, the party is over.