Your Passport to Underappreciated 7% Yields

Subscribers to my Contrarian Income Report have enjoyed safe yields of 7% or more over time – and enjoyed long-term price stability – thanks to two simple principles:

2018 hasn’t exactly been up to snuff. Most market experts expected the Trump tax cuts, breakneck economic growth and fat corporate earnings to shoot the market to the moon. Instead, we’ve only managed to advance less than 5% more than halfway throughout the year.

Yet stocks still are grossly overpriced – the byproduct of this practically ancient nine-year bull market. Finding quality 7%-plus yields in the American markets is difficult enough, but finding them at a decent price?

My advice? Don’t beat your head against the wall – think around it. In this case, if America’s high yielders are bloated, look outside the U.S.

Here’s a poorly guarded secret that many investors still aren’t wise to:

International blue chips often yield just as much if not more than their American counterparts. And because information on these companies isn’t as easy to come by as U.S. blue chips, they can go under the radar and be undervalued as a result.

Better still: Trade-war rhetoric has been holding back many international stocks as well, providing even juicier buy points and inflating yields.

That’s a perfect scenario for shrewd opportunists like you and me.

Let’s dig in. Here are five international stocks yielding between 6% and 8%:

And this energy titan is putting together a gangbuster 2018 that has it up 18% versus a 7% loss for the iShares MSCI China ETF (MCHI).

The company in April delivered its best quarterly earnings report in nearly three years. Profits jumped 12% to 19.31 billion yuan ($2.87 billion), on revenues of 621.3 billion yuan ($92.2 billion), up 6.7% year-over-year. Much of that profit was built on the back of higher processing margins – something that has lifted several of China’s energy firms.

The company clearly is making shareholder rewards a priority. That, its energy dominance, and its new investment project in industries including new energy, energy conservation and environmental protection, makes SNP one of the better blue-chip plays in this sector.

Sinopec Is Building a Head of Steam 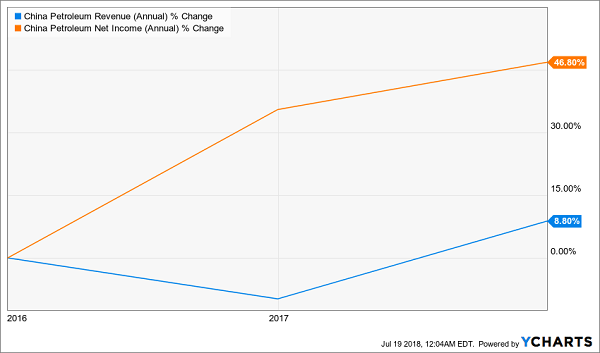 Enel Generacion Chile S.A. (EOCC) gives you almost exactly what you would expect from a utility company in an emerging market: high yield, but a lot more instability than you’d get from an American utility. To wit: EOCC shares have lost more than a quarter of their value in 2018 … but that has driven the stock’s yield to well north of 6%.

Enel Generacion, the product of a massive restructuring, is a Chilean power producer that’s very sustainable in nature – 55% of installed capacity coming from hydroelectric. The company produced a little more than 17,000 gigawatt-hours of electricity in 2017, though that extended a string of declines dating back several years.

The prospects for Enel seem generally bright, given that the Chilean Energy Ministry projects 6%-7% electricity demand through 2020, and given that Chile is trying to push more of its electricity production to renewable resources. Moreover, the vast majority of its customers are regulated in nature, which should provide some level of stability.

Nonetheless, like almost everything else in Chile, Enel’s fates are at least somewhat tied to the all-important copper industry – an electricity-intensive process. And the past couple years or so have been marred by fears of strikes at several of the country’s major copper facilities, including current worries about the giant Escondida mine.

The optimist in me says maybe, perhaps, possibly, EOCC could be a contrarian high-yield play that will bounce back once copper-production fears are in the rear-view. But the pragmatist in me says that if you’re going to fish in the utility space, you’re looking for the kind of dependability that this emerging-market power producer simply can’t provide.

EOCC: This Isn’t the Kind of Steady You Want 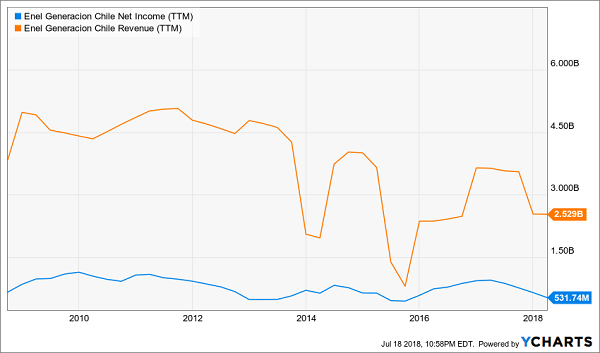 Investors used to the low-growth, high-yield nature of American telecoms such as AT&T (T) and Verizon Communications (VZ) should know that industry players look awfully similar in other parts of the planet. That includes the U.K., where Vodafone Group (VOD) rules as one of the globe’s largest telecommunications providers – and one of the best-yielding blue chips on the market.

While Vodafone has British headquarters, its operations span not just Europe, but Asia, Africa and Oceania, too, All told, it boasts the second-highest number of customers behind only China Mobile (CHL).

In fact, its presence in many emerging markets is exactly what makes Vodafone a bit more exciting than the AT&Ts and Verizons of the world. Specifically, Vodafone India in 2017 announced it would be merging with India’s Idea Cellular. Once finalized, the combined entity will be country’s largest telecom, covering 380 million users and representing 40% of the industry’s revenues.

Vodafone isn’t a serial dividend raiser like AT&T and Verizon. But it has kept its payout relatively stable over the past decade or so, excluding a massive one-time dividend in 2014 resulting from the company’s stake in Verizon Wireless, its joint venture with Verizon Communications.

A list of high-yield stocks wouldn’t be complete without a real estate investment trust (REIT).

However, while City Office REIT (CIO) can be found north of the border in Vancouver, Canada, its operations are entirely American in nature. The REIT invests in Class A and B office properties in the metro areas of seven cities: Dallas, Denver, Orlando, Phoenix, Portland (Oregon), San Diego and Tampa. The company targets attributes such as high-credit-quality tenants and excellent access to transportation, and its contracts include rent escalations – good for investors seeking out safe, reliable growth over time.

And they’ve gotten it … sort of.

When Will City Office REIT’s (CIO) Price Catch Up? 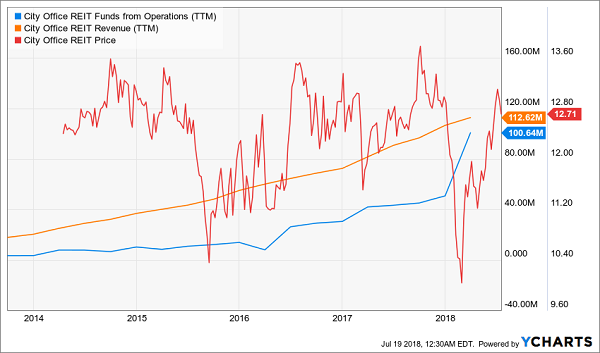 The top line – and more importantly, funds from operation (FFO) – have been accelerating over the past few years. In its most recently reported quarter, FFO improved by nearly 8%.

That said, the share price hasn’t at all reflected the company’s progress over the years, essentially running flat over the past five years. Perhaps that’s at least a little because the company has kept its dividend flat in that time, perpetually stuck at 23.5 cents per share. But at this point, the value proposition is starting to kick in, with the REIT offering a 7%-plus yield for roughly 11 times FFO.

Americans get the short end of the stick when it comes to financial-industry dividends. The Financial Select Sector SPDR ETF (XLF) yields a paltry 1.7% right now – below the market average, and not even close to the 10-year T-note.

Pull out your passport, and you get a different story. Just look at Canadian stocks such as Bank of Montreal (BMO) and Bank of Nova Scotia (BNS) hover around the 4% area, while British banks HSBC (HSBC) and Lloyds Banking (LYG) deliver closer to 5%.

In Australia, Westpac Banking Corporation’s (WBK) 6%-plus represents one of the highest banking yields on the planet. But it might be a yield trap.

The performance of Westpac, like most banks, is in part tied to domestic growth, and Australia’s GDP is poised to come back (the IMF estimates 3% growth) after a disappointing 2017 (2.3% growth). That’s the good news.

The bad news is that the brewing trade war between the U.S. and China could undo some of that progress, and already has done a number on Australian stocks. A Citi study says a trade war could potentially shrink Australia’s economy by about $21 billion and push down the value of the Australian dollar, hurting the average household there by about $1,500 annually.

Westpac also is suffering a major PR hit at the hands of the Banking Royal Commission, which is investigating the country’s largest banks. Westpac has found to have “defective lending controls”; the commission also uncovered an ugly incident in which Westpac filed a claim against an ailing aging pensioner.

But keep an eye on WBK. If the U.S.-China saber-rattling dies down, this high-yield Aussie stock might be poised to claw back its 10% losses from 2018 – and perhaps more.

If you’re like millions of Americans looking to push your income “the last mile” to wealth and happiness, these 6%-8% payers are a good place to start.

But if you don’t want to spend your days scouring the globe for safe income, your timing is PERFECT.

Because this Wednesday, July 25, at 2 p.m., I’m going to reveal my Dividend Accelerator system to a select group of investors in a FREE live webinar, and I want to give YOU a VIP pass!

This is the exact same system I use to juice my own portfolio to create a safe, steady stream of 15% – 20% income.

Here’s what you’ll learn in this unique 60-minute online event:

Don’t miss this FREE one-time event. Simply CLICK HERE to reserve your spot now, then join me at the show on Wednesday!