There’s one investment you simply must not hold in this market crash—a highly speculative, high-yielding instrument called an exchange traded note (ETN).

Does the name sound familiar? That’s probably because it sounds like “exchange-traded fund,” or ETF. But an ETN isn’t like an ETF at all—and that’s a distinction many people fail to make.

As a result of the coronavirus selloff, ETNs aren’t just going to rack up big losses—they’re going to go to zero. This is a disaster, especially since there are so many valuable companies to invest in right now, including those with strong cash flows like Amazon.com (AMZN) and Apple (AAPL), which will come through this downturn just fine.

Before we go further, let’s quickly talk about how an ETN works.

Unlike an ETF, an ETN doesn’t buy the assets it’s supposed to track. Instead, it’s a debt issued by a bank that promises to pay investors the value of the index the ETN tracks. Most ETNs are issued by Swiss investment bank UBS (UBS).

So, for instance, the UBS AG FI Enhanced Global High Yield ETN (FIHD) tracks large-cap and mid-cap stocks, even though it doesn’t actually buy any of them. Instead, UBS promises to exchange the ETN for its market value, so it trades on public markets, and the market approximates the value of the ETN as if it were a real fund.

Sound abstract? It is. And a lot of ETN investors don’t fully understand this abstraction, or what it means in a downturn. One of the biggest risks with ETNs is their mandatory redemption clause. This states that, if the ETN falls under $5.00, UBS must redeem it for cash. Here’s what that would mean for FIHD. 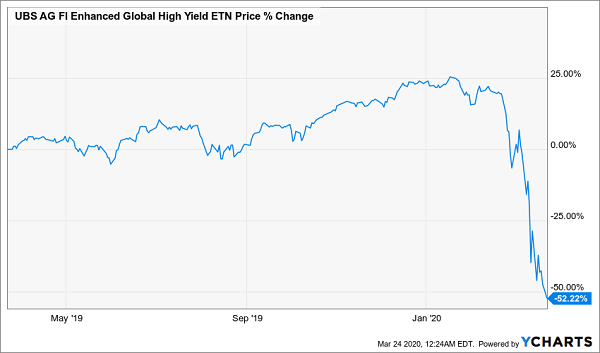 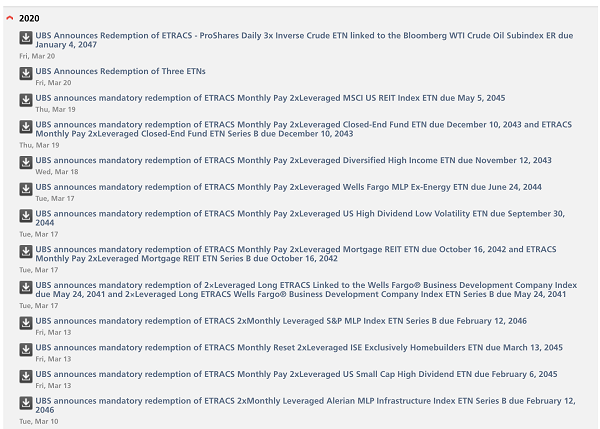 In other words, shareholders in those ETNs will lose essentially all of their capital because of this market downturn, while investors in dividend-paying funds backed by real assets, like closed-end funds (CEFs), can ride out the market dip while collecting dividends.

That brings us to why ETNs have attracted investors in the first place: income.

Before the crash, many ETNs offered dividend yields of 15% or more. These yields were just too enticing for some investors, so they bought. And they may have thought that, if they held on long enough, that income could offset the risks of holding the ETNs and their volatile assets.

There’s a simple logic to this: if an ETN is paying 15% dividends and you keep it for seven years, you’ll get your money back in income. So just hold for a decade and, if the ETN goes to zero, that’s okay, because at least you got the income!

While that may make sense in theory, reality is a bit more complicated. While some ETNs are almost a decade old, many of them have been around for only five years, and many of those are the ones being shut down now because of their huge losses.

So much for holding for the long term—these investments simply aren’t built to last.

Could anyone have predicted the ETN bloodbath? Yes, because it’s happened before.

About a decade ago, another Swiss bank issued an ETN tied to the VIX called the VelocityShares Daily Inverse VIX Short-Term ETN (XIV). XIV soared during the bull market of the 2010s, when volatility kept falling. XIV, as an ETN that tracked being short the VIX, was massively outperforming the S&P 500 as a result.

How Can You Go Wrong with a Chart Like This? 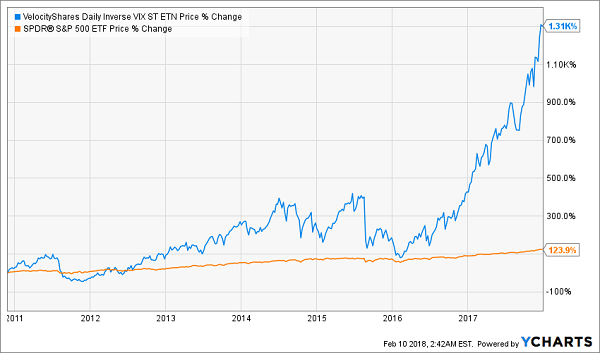 Bloomberg and other professional financial outlets called this “the shoeshine boy trade” because, in 2016 and 2017, it was so popular among investors that it became a much-lauded trade in online investing forums, barber shops, restaurants and wherever else people chatted about the market.

And, like any shoeshine boy trade, it was great until it suddenly wasn’t.

This is How You Can Go Wrong 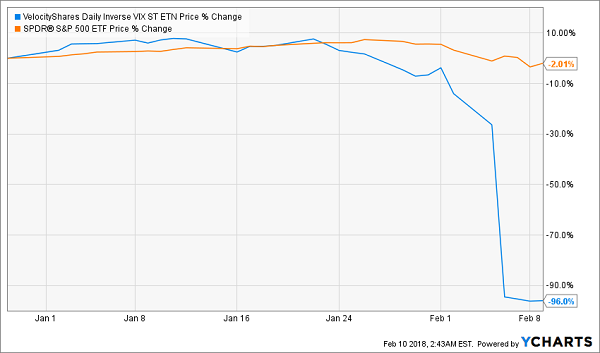 When volatility surged in early 2018, this fund went to near zero and was liquidated. That was a harbinger of doom for any ETN investor, and it prompted me to warn against ETNs at the time.

Now that many of UBS’s ETNs are being liquidated, it’s likely that this obscure corner of the financial market will shut down. At the very least, it’ll never be the same again.

In this pullback—or any pullback—adding a high-yield CEF to your portfolio can be a solid strategy, and I’ve got 4 buys waiting for you right here. I’ve personally safety-checked and hand-picked these 4 funds, which offer safe 8.4% average dividends now.

The highest payer gives you an outsized 10.4% payout. So you can hang onto this one for a decade and get all of your upfront investment back in dividend cash alone! But unlike with dangerous ETNs, you don’t have to take heart-stopping risks to make that happen.

These 4 funds’ high, steady yields are their first line of defense in this crisis.

The second is that they all trade at deep discounts to the value of the investments in their portfolios. We don’t have to get too far into the weeds here, but this is known as a “discount to NAV” in CEF-speak, and it gives us an extra “shock absorber” in a crash like this.

These discounts are easy to spot on any CEF screener worth its salt, which makes our strategy  simple: buy a CEF trading at a massive discount to NAV, then BUY. Because if a top-quality CEF is already absurdly cheap, we’re getting some much-needed downside insulation here. And this fund will likely be among the first to jump when the dust settles!

I can’t wait to share these 4 cash-rich CEF picks with you. Simply click right here and I’ll give you full details on each of them: names, tickers and my full analysis of each one (including a full breakdown of their dividend histories and safety). Don’t miss out.