There’s a very easy (and costly) mistake you can make when picking funds. And plenty of folks make it every day.

These investors run up on the rocks because this error looks like a good idea, until you dig just a little bit deeper.

Today I’m going to show you exactly what this mistake is and reveal three laggard funds that just might tempt you into making it. The worst part? They don’t even pay you a dividend for your trouble!

First, the mistake itself: I’m talking about choosing a fund because it has one big winner in its portfolio.

Sound like nonsense? That’s what many people say when I warn them that just because a fund has one killer stock in it, that doesn’t mean it’s a good fund. But the truth is, this is a useful piece of advice that can help you avoid a big mistake now and in the future.

To show you what I mean, let’s look at the best non-penny-stock performer of 2019, a company you’ve probably never heard of:  Axsome Therapeutics (AXSM). 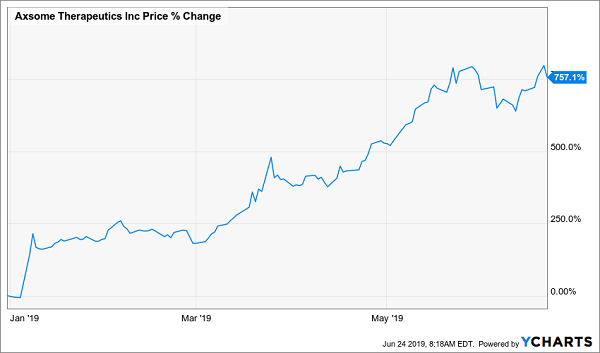 Who wouldn’t want a return like that in half a year? The problem, of course, is finding those winners before everyone else does.

Great—and even better if these drugs get final approval, come to market and help future patients. But for now, investors simply can’t know whether Axsome will become a multi-billion-dollar company (it’s closing in on a $1-billion market cap already) or become worthless as its drugs fail to get approval.

To mitigate the risk of buying a bunch of hopeful drug companies that end up producing nothing, many investors choose a fund with biotech exposure. But that raises a question: would you have done well by investing in a fund holding Axsome in 2019?

The answer is no.

In fact, the top three funds holding this stock have had lackluster returns when we compare them to the SPDR S&P 500 ETF (SPY). To explain why, let me first introduce you to our cast of characters.

The three funds that have the heaviest exposure to AXSM are:

DWAS is a so-called “smart beta” ETF with fixed rules computers use to buy and sell stocks with minimal human intervention. As such, it only got into AXSM after the stock started to soar—so we can’t rely on it to “pick” big winners before the market has woken up to them.

That leaves the two mutual funds, which focus on high-potential micro-cap companies picked by the funds’ managers. These funds are designed to identify the best companies before the rest of the market does.

Has this strategy worked in 2019? Not really. 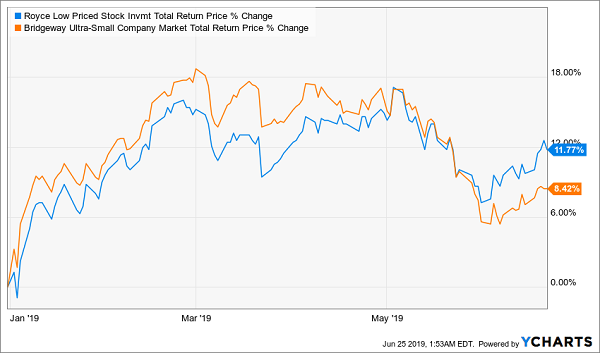 Neither fund has beaten the S&P 500’s 18% total return for 2019, which means just choosing the winning AXSM wasn’t enough.

The reason? One 750% return wasn’t enough to offset each fund’s losers. If we look at the performance of both funds’ top holdings in the last year, we see that neither held a ton of big winners like AXSM. Instead, their holdings included duds that have gone down, which explains this chart: 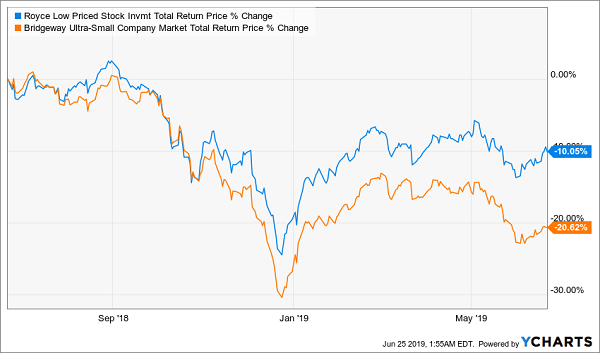 The takeaway? When looking at a fund’s portfolio, we need to go deeper than management’s best pick. That’s because these home runs can be a matter of luck, and they can hide many lackluster (or worse) selections.

You can bulk up your portfolio’s safety and bag a mammoth 10.7% income stream with my top stock-focused CEF pick now.

I’ve made this top-secret CEF my No. 1 pick in stock-focused funds for 2 reasons:

How does this fund do it?

It’s run by an investment all-star team cherry-picked from 5 of the sharpest management firms on Wall Street.

Together, this crew invests in a “no-gimmicks” portfolio of value and growth stocks, all of which have deep moats protecting their businesses: names like Visa (V), Microsoft (MSFT), Alphabet (GOOGL) and Abbott Laboratories (ABT).

So how has this all-star team performed?

They’ve dominated, with most of my pick’s monstrous total return coming in cash, thanks to that huge dividend payout:

Crushing the Market in Cash 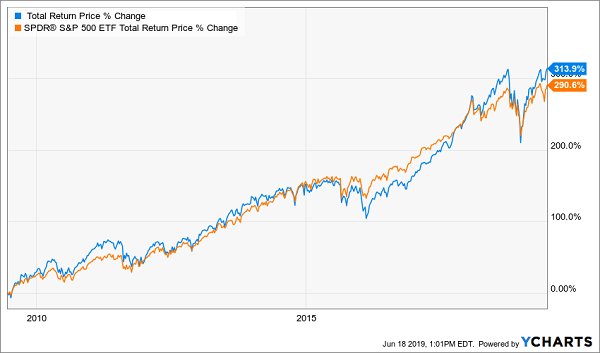 Finally, this fund trades at an unreal 5% discount as I write this. It’s only a matter of time before that shifts to a massive premium, propelling my pick’s market price higher as it does.

So you’ll be looking at a big capital gain here, to go along with that growing 10.7% dividend.

I’ll give you everything you need to know—name, ticker, buy-under price and a complete look under the hood of this powerful 10.7%-paying pick—when you click right here.