Investors celebrated a compromise in Washington D.C. that allowed the U.S. government to avoid another shutdown ahead of a long weekend. As a reminder, the U.S. markets will be closed next Monday, for the President’s Day holiday.

On the earnings front, Coca-Cola (KO) turned flat and lost 8% a day after cutting its annual profit outlook. According to Bespoke Investment Group, the beverage producer’s lower guidance is part of a larger trend.

The chart below tracks the numbers of companies that have raised forward guidance, compared with those who’ve lowered it, on a three-month rolling basis. According to Bespoke’s figures, the reading has been steadily declining since mid-2018 and has recently moved negative for the first time in almost two years. 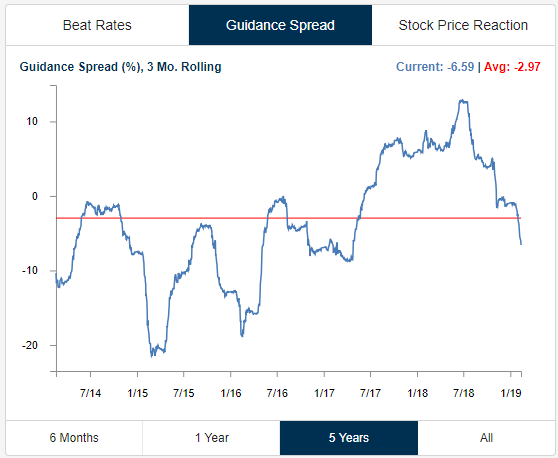 Even with the holiday-shortened trading week, there will be no shortage of companies reporting earnings. Here’s a list of the highlights: 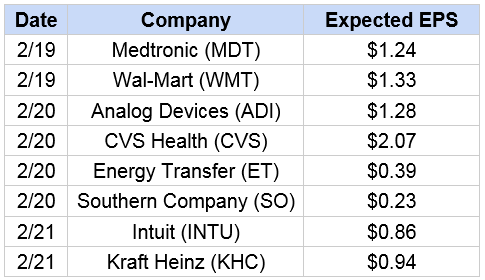 Are Investors Being Complacent?

Following the fourth quarter, where traders were running scared for a variety of reasons, the S&P 500 has gained 17% in the past seven weeks. This begs the question: are U.S. stocks overbought?

For one thing, earnings growth is trending around 14% for the fourth quarter of 2018. However, this is down from 20%-plus improvement in each of the first three quarters last year and the profit trend is expected to continue lower in the first half of 2019.

Several voices chimed in on the argument this week:

Morgan Stanley for one, does not expect growth to rebound in the second half of the year and lowered its “base case” for 2019 S&P 500 earnings growth on Monday, to just 1%.

On the other hand, CFRA Research said on Thursday that valuations “seem fair”, with the S&P 500 valued at 16.4 annual earnings, which is in-line with historical averages.

Another market survey that comes out each Wednesday is also worth keeping an eye on, as it showed this week that U.S. stocks may be approaching a near-term top.

The Chartcraft Investors Intelligence survey of newsletter writers saw an increase in Bullish sentiment for the sixth straight week, to 49.6%, marking the longest streak of increases in more than two years. This generally tends to be a contrarian indicator, with levels over 50% indicating a “sell” signal.

Market-timing, especially when to sell a big winner, is a decision that even experienced investors can struggle with.

However, if you’re nearing retirement or already retired, all you really care about is generating consistent income and protecting your hard-earned nest egg– not whether a company misses earnings expectations by a few pennies, or if valuations are keeping up with decelerating profit growth.

Thanks to his work, you no longer have to settle for low bond yields, or stocks like Coca-Cola that can fizzle out and fall as much in one day as they pay in two years of dividends.