The long-awaited infrastructure bill has passed. Let’s talk about the six best dividend stocks to capitalize on this spending.

Here’s where the larger chunks of money are going:

Most of this “obvious” government spending is going to industrials and materials firms. Unfortunately, the stocks of these companies rarely yield more than 2%. In fact, as I write the popular ETFs pay dividends that average out to a mere 1.4%.

But low yields can be OK if the dividends attached to them are growing quickly.

Over time, rising payouts act as “magnets” that pull their share prices higher.

Well, dividends don’t get much safer than when they are funded by Uncle Sam! Let’s chat about his favorite six pack of infrastructure-bill winners. Each of these firms, as discussed, are raising their payouts by 10% or more every year. This means their dividends are on track to double in the coming years—and their share prices should follow.

Steel Dynamics (STLD, 1.6% yield) is one of America’s largest steel producers, as well as the second largest producer of steel building components. The company creates everything from flat roll, beam and bar steel to threaded rods to joists and girders. It also produces processed copper.

The infrastructure bill is just another shot in the arm for STLD, which should also benefit from a rebound in automotive production in 2022, not to mention high demand in non-residential buildings. This flurry of bullish drivers should also help Steel Dynamics keep the pedal down on a payout that has grown by 11.5% annually on average over the past three years.

That’s the same dividend-growth rate as Louisiana-Pacific (LPX, 1.1%), which produces a wide range of building materials. Its solutions include engineered wood panels, flooring, siding and fences. In addition to hiking its payout rapidly—including a 12.5% bump this year to 18 cents per share—it’s also a devourer of its own shares. LPX bought 6.8 million shares, or roughly 7% of all outstanding shares, during Q3 alone, and has repurchased almost 3% more so far in Q4.

LPX Picks Up the Share-Repurchase Pace in Recent Years 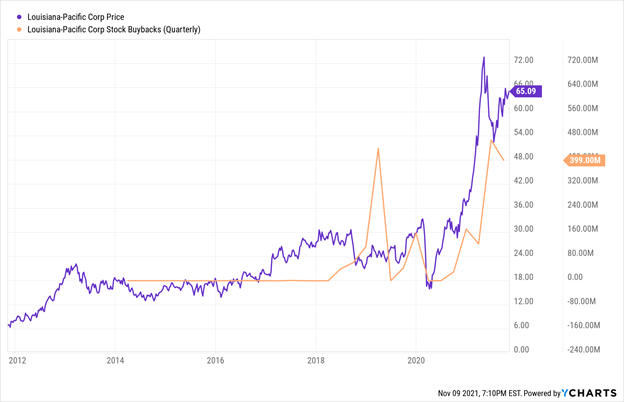 The infrastructure bill has also turned engineering firms into sexy plays, but the industry has few dividend growers as aggressive as Tetra Tech (TTEK, 0.5%). The firm’s payout has grown by 26% annually over the past three years, which is a hifalutin way of saying that the dividend has doubled since the start of 2018.

Tetra Tech’s consulting and engineering solutions include intelligent water management and an eye for sustainability—two traits that should stand out given the Biden administration’s stated goals.

Speaking of water, expect Advanced Drainage Systems (WMS, 0.3%) to receive an extra call or two from the government. WMS designs, makes and sells pipes, septic tanks, drainage structures, water separators and more. In fact, it’s so visibly tied to infrastructure spending that Ohio Sen. Rob Portman toured the Hilliard-headquartered company to tout the plan back in August. WMS is another fervent dividend raiser, hiking the payout by 11.2% annually since 2018.

Parker-Hannifin (PH, 1.3%) produces motion and control technologies and systems for a variety of industries, be it aerospace, healthcare, oil & gas, chemical processing, industrial equipment, transportation and more. But its applications for heavy construction equipment, as well as liquids removal for construction sites, help it stand out as another infrastructure winner.

It’s also a classic case of a stock that chases its dividend higher—good news considering its 16% annualized clip over the past three years. 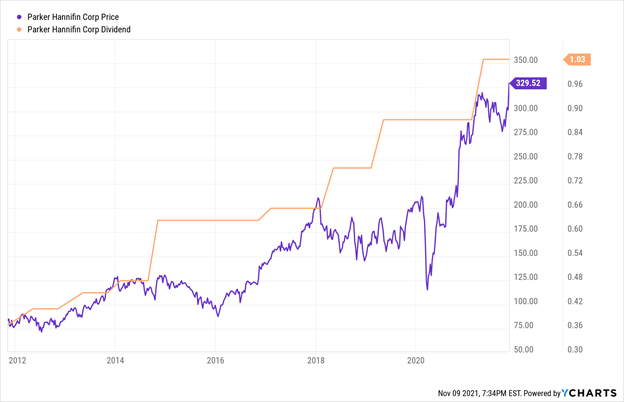 And let’s not forget the modern-technology aspects of the bill. Namely, some $65 billion will be spent delivering broadband access to rural areas and low-income families. While this largely feels like a technology/communications play—and it is—there are a few yield-friendly ways to benefit. Among them? Crown Castle International (CCI, 3.3%), a communications-infrastructure real estate investment trust (REIT) that boasts more than 40,000 towers and roughly 80,000 route-miles of fiber.

The 3.3% yield makes it a relative juggernaut compared to most infrastructure plays, and that figure could get much bigger going forward. CCI has averaged nearly 12% dividend growth over the past three years, including a 10.5% hike for the final quarter of 2021. Clearly, it still has plenty of fuel left in the income tank.

Make 15% Every Year—Even During Recessions!

I’m jazzed about the tailwinds pushing these generous dividend growers, but several of these stocks have gotten a little rich for those of us that demand a reasonable value.

So, rather than chase the crowd into these already-crowded names, you should turn your attention to other stocks that ace the “shareholder trifecta” but haven’t taken flight—at least not yet!

I’m talking specifically about seven dividend growth plays that are due to double. Thanks to their A+ trifecta scores, these stocks have three ways to pay us:

These Hidden Yields stocks can provide us with a recession-proof retirement. They can even make us as rich as we’d hoped to be in our younger days!

These seven dividends are poised to double over the next few years. As these payouts pop, the share prices will follow higher. So, the best time to buy them is right now—before they soar, not after!

Bull or bear, I don’t care. These seven recession-proof dividend stocks are primed to deliver 15% returns per year, every year.