Markets went off the rails this week, as the 10- and 2-year Treasury yields invert.

What’s nerve-wracking is that such a development in the 2/10 has occurred ahead of every U.S. recession over the last 50 years, sometimes leading by as much as 24 months, says Fox Business.  “For example, October, November of 2006, exactly one year before the Great Recession began, the 2-10- inverted.” 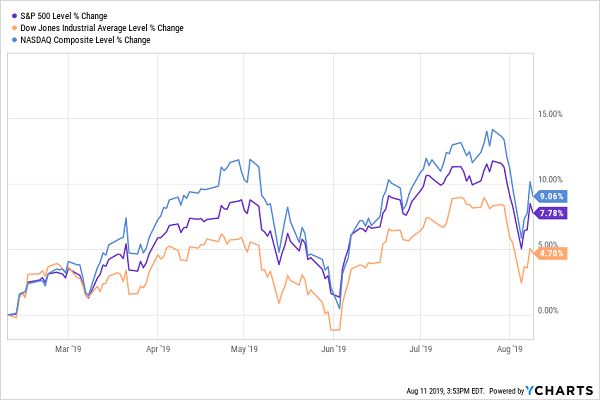 That’s not the worst of it, though.

One, President Trump says the U.S. just isn’t ready to end the trade war dispute, even though 10% tariffs were delayed until December 2019.  Two, Morgan Stanley just made the case that a global recession will hit in the next nine months if we don’t see a near-term resolution. Three, Goldman Sachs says the President is increasing the odds of a U.S. recession.

For example, according to Goldman Sachs, fourth-quarter growth could drop to 1.8%, which takes the trade war into consideration, as highlighted by NBC News.  Fears that the trade war will trigger a recession are growing.”

Mark Zandi, chief economist at Moody’s Analytics, said the trade war has eliminated 300,000 jobs and reduced the GDP growth by 0.3 percentage points so far, as also noted by NBC News.

So, it comes as no surprise that investors have been fearful of the market.

Herd instincts are kicking into overdrive over the trade war, and fears of a global recession.

Instead, one of the best investments you can make today is in real estate investment trusts, or REITs.  That’s because they’re seen as having far less exposure to trade war conflict, and benefit from falling interest rates.  Plus, REITs, which pay out at least 90% of their taxable income in dividend payments to you, they yield 4% on average.

Fact is you’ll make more money from a REIT than you will with your average stock or bond.

They also have a strong history of outperforming in times of rising and falling interest rates.  In addition, slowing global growth is quickly forcing investors into more defensive investments that carry consistent income, like a REIT. 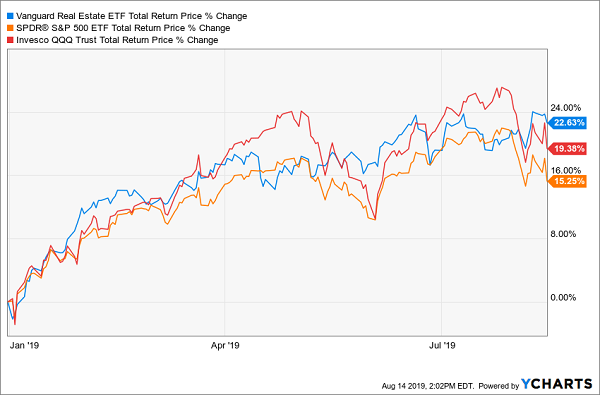 That’s key, especially as the trade war could potentially force us into another recession.

Remember, an escalation of the U.S.-China trade war could spark a global recession in just nine months, warns Morgan Stanley.  And while that’s something to be concerned about, REITs are some of the best assets to hold during recessions because they continue to pay high yields.

As Michael Foster noted, “REITs were one of the best asset classes to hold during the Great Recession. Even though that crisis was driven by plummeting real estate prices and a lot of bankrupt mortgage derivatives, REITs largely held strong: while the recession did put a drag on rents in some situations, just because everyone was suffering, relatively few REITs failed during the meltdown. More importantly, the REIT market fully recovered faster than stocks did.”

Even better, during the recession, most REITs still paid out high income.

REITs pay healthy dividends.  In fact, they have to by law, which requires them to pay out 90% of their taxable income annually in the form of a dividend.

That’s a sizable reason why REITs perform so well in most market environments.  That’s also true even in markets with low returns. As we know, U.S. stocks have had a big run over the last decade, which has continued well into 2019.

However, with stretched valuations, returns could be modest at best at such elevated levels.

If that’s the case, the high dividends of REITs make them more attractive to investors.

A great way to invest in REITs is by owning a REIT-focused closed end fund (CEF).

There are quite a few that will invest in REITs and then pass that income back to investors.

One CEF to consider is Cohen & Steers Quality Income Realty Inc. (RQI).  While it’s better to buy a CEF that trades at a steep discount to NAV, RQI currently trades at a 1% discount and also has a strong history of beating the SPDR Dow Jones REIT ETF (RWR). 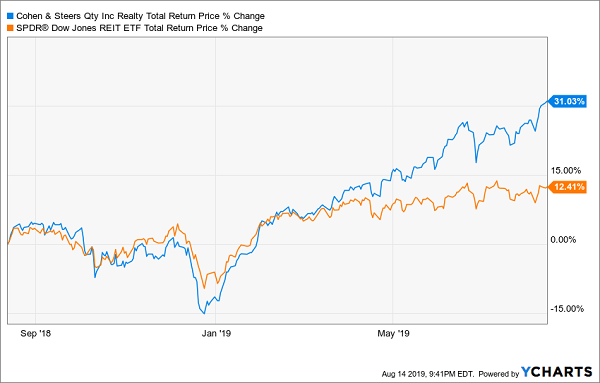 That’s one reason to like RQI.  The other is what it holds in its portfolio, which includes American Tower Corporation, Prologis Inc., Equinix Inc. and Crown Castle International.  That provides the CEF with a well-diversified list of property types throughout the U.S.

We can diversify even further with the Principal Real Estate Income Fund (PGZ).

At the moment, PGZ trades at a nearly 10% discount to NAV with a dividend yield of 6.7%. 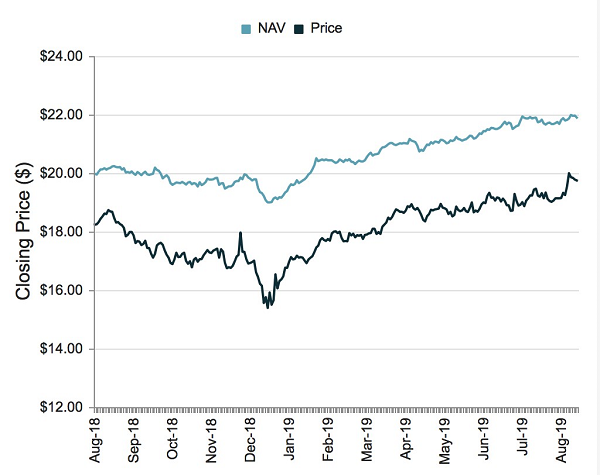 In short, if you’re looking for dependable income in a trade-war torn market, one of your best opportunities can be found with REITs and REIT-focused CEFs.

Herd instincts are kicking into overdrive over the trade war and fears of a global recession, forcing investors out of the market.

But that’s a terrible move.  You won’t earn anything for retirement that way.

It’s why we’re still pounding the table over four top closed-end funds that are offering sizable dividends, in addition to the protection you want from a potential recession.

The best part — all four are carrying high, safe yields of 8.7% on average.

In addition, not only are all four of these CEFs trading at a discount to NAV, one of them has an explosive yield of 9.3% which I’ll show you when you click here.