Two 7% Dividends (with upside) No One Is Talking About

The headlines say it all: the economy is slowing down, right?

And with stocks soaring—up 11% year to date—we must be headed for a correction.

Both statements would be off the mark.

Because the economic numbers the government is putting out (and the press is repeating without question) are flawed. I’ll show you how in a moment.

First, let’s zero in on the many economic tailwinds (some in disguise), that are driving this still-solid opportunity.

Workers Are Flush With Cash …

The unemployment rate, at 4%, is still near its lowest level in over a decade, but the real good news comes from wages. Americans’ salaries swelled at their fastest pace ever in October 2018, jumping 3.1%, then topped that in January 2019, surging 3.2%. In fact, pay growth is unstoppable: 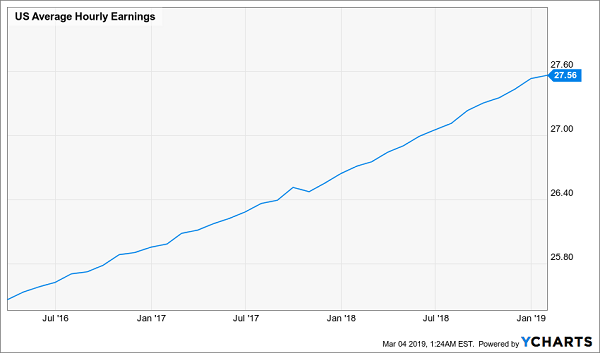 That’s not all. Researchers at the Federal Reserve Bank recently published a report saying that average hourly earnings are being understated by “a notable amount,” partly because of a skew in how the bank averages high-income earners with those who earn less. If true, things look even better for American workers.

It’s at the cash register (or the “checkout” button) that the nervous nellies are getting, well, nervous.

Let’s start with the retail-sales report the Census Bureau puts out every month. This number had been doing fine—until December. 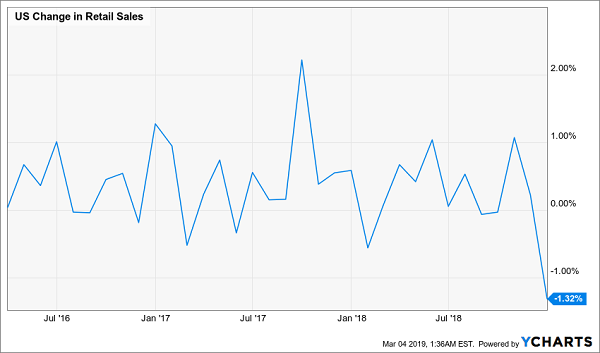 All of a sudden, retail sales fell 1.3%, the biggest drop since the Great Recession. Since analysts were expecting a 0.2% gain, this was stunning. Also remember that this is a month-over-month change, meaning Americans spent less during the holiday season than they did in November.

A massive shift like that demands to be tested. And, savvy second-level investors we are, we can easily do this just by looking at results from America’s biggest retailers.

In the fourth quarter of 2018, Walmart’s revenue rose 1.8%, a bit above expectations. Costco’s sales gained 10.3%, another beat. Target’s 5.6% revenue growth was close to expectations, while Macy’s saw in-line growth at 2.3%.

And the biggest retail behemoth of them all, Amazon, saw 19.8% revenue growth, a solid beat. Overall, a majority of consumer-discretionary companies saw revenue grow in the last three months of 2018, and even consumer staples saw a majority beat expectations: 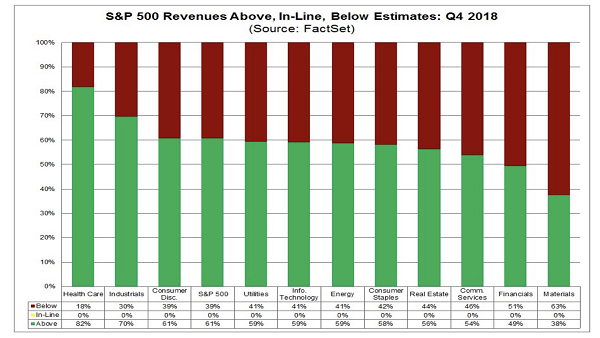 In short, there’s no indication that people were buying less in December. Further, consumer sentiment didn’t drop, as you’d expect in a spending pullback: 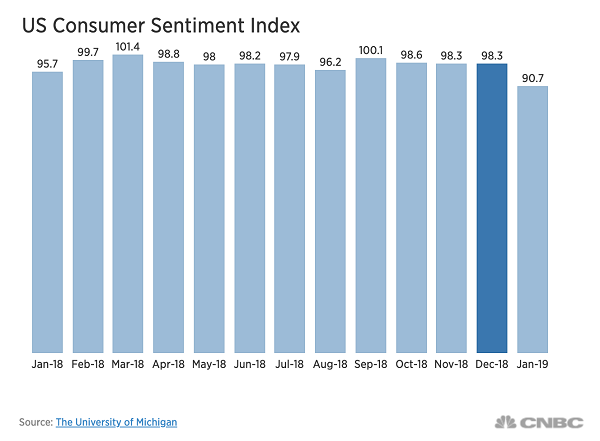 What’s really going on? It feels like the Census Bureau’s December data was faulty, likely disrupted by the government shutdown. So we need to be skeptical, especially in light of my next point.

That brings us to earnings, the key driver of stock prices. The fourth quarter saw profit growth across the market, with relative strength in oil prices resulting in a huge jump for energy:

Earnings Gains Across the Board 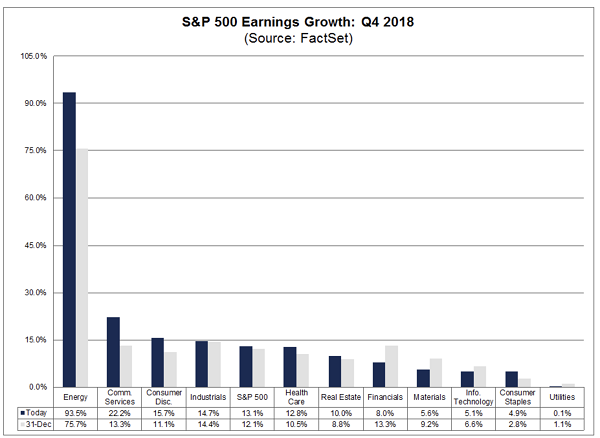 This helped drive average S&P 500 earnings growth of 13.1%, marking the fifth quarter in a row that profits swelled more than 10%, one of the best streaks ever. Most significantly, consumer-discretionary stocks’ 15.7% growth was far ahead of the average for all sectors, again showing that the Census Bureau’s retail-sales data is off the mark.

Putting It All Together

Right now the economy is performing well, even with those questionable results for consumer spending. And that means we need to relax about our recession fears. It also means we need to ease up on worries over a stock-market run-up.

Stocks Are Still Well Off Their Highs … 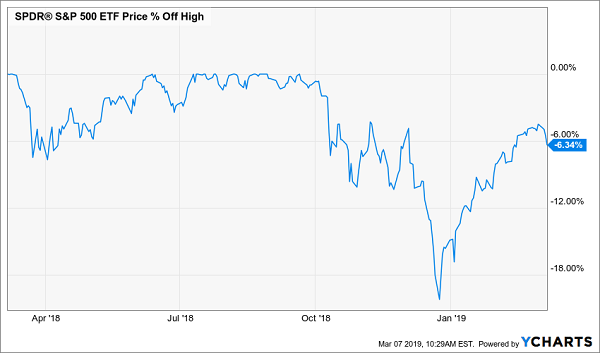 Even though the market is going strong, we’re still over 6% below all-time highs, even though earnings are up around 15% since we were at that level. These two factors mean the S&P 500’s P/E ratio hasn’t yet recovered from its 2018 fall:

… and Cheap Compared to Earnings, Too 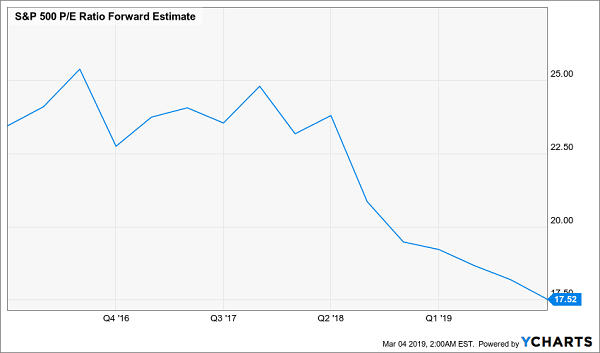 The conclusion is that it’s still a very good time to buy stocks—and fearing a recession is perhaps the worst thing you could do for your portfolio.

So what’s the best way to buy in?

The easiest way is to just go with the popular choice: an index fund like the SPDR S&P 500 ETF (SPY). The problem? SPY’s pathetic 1.8% dividend.

We can do a lot better if we go with the two CEFs I mentioned earlier, which pay a lot more and also hold S&P 500 stocks: the Nuveen S&P 500 Dynamic Overwrite Fund (SPXX), payer of a 7.3% yield, and the Nuveen S&P 500 Buy-Write Income Fund (BXMX), which yields 7.5% and also sells call options, the proceeds of which help fuel its dividend.

We can also expect additional upside from both funds, thanks to a figure called the discount to net asset value (NAV, or the value of each fund’s underlying portfolio). SPXX, for example, trades at a 0.5% discount but has traded at premiums as high as 16% in the last year.

BXMX still has discount-driven upside ahead, too, thanks to its 0.6% discount, which has ranged up to a 2.7% premium in just the last year.

You’ll score even bigger dividends, no matter what the market throws at you, if you grab my top 4 buys for SAFE 7.5%+ dividends today.

These 4 bargain CEFs—whose massive 7.5% dividends are so solid I call them “pullback-proof”—are growing like weeds, with management practically begging us to take cash off their hands!

In fact, they’re forcing us to, through their sky-yields and regular dividend growth.

So why do I call these CEFs “pullback proof”?

Because each one trades at a totally unheard-of discount to NAV that gives us two “must-have” strengths:

I’m one of a handful of analysts in the world devoted 100% to high-yield CEFs. I’ve spent hours sifting and analyzing to come up with these 4 “best of breed” funds, and I can tell you this:

These are precisely the kind of investments you need to own in today’s economy.

Click here now and I’ll give you everything you need to know about these 4 battle-hardened, cash-rich CEFs: names, ticker symbols, buy-under prices and my complete research, so you can kick-start your own reliable 7.5%+ income stream today.