This Unusual “Dividend Merger” Could Deliver a 9.2% Payout

Three of the most successful closed-end funds (CEFs) in history have done something unprecedented—both for the funds themselves and the company that manages them. They merged.

PIMCO is arguably the most successful CEF manager around, and investors know it: they’ve bid up almost all the company’s funds to premiums to net asset value, or NAV (in other words, their market prices are higher than the per-share value of their portfolios).

The company has always kept its funds separate, even though they have many similarities, so it came as a surprise when it announced that its PIMCO Dynamic Credit and Mortgage Fund (PCI), PIMCO Dynamic Income Fund (PDI) and PIMCO Income Opportunities Fund (PKO) would be merged into the same fund. The new fund will keep PDI’s name and ticker.

If you’re a subscriber to our sister Contrarian Income Report service, you’re likely familiar with PCI, which is a long-time CIR holding (as a bigger CEF, with a $3.5-billion market cap, PCI is a better fit with CIR than with my CEF Insider service, which focuses on smaller funds). There’s a good reason for that: its high dividend! As I write this, PCI yields 9.2%, while PDI also yields 9.2% and PKO yields over 8.5%.

Note that these yields exclude the special dividends PCI and PDI have paid several times in their histories. 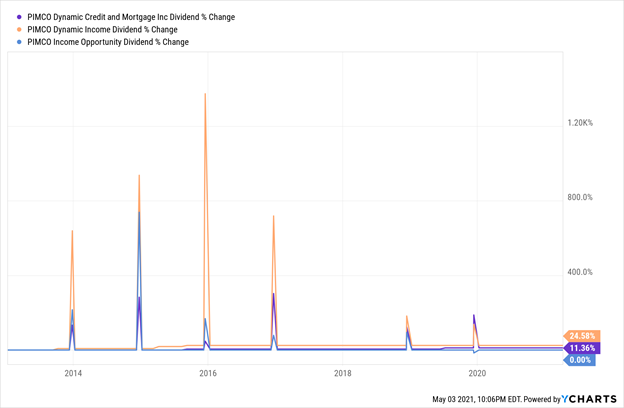 What’s more, these three funds have not cut their dividends in their history. In fact, they’ve raised them over the long term.

Now let’s dive into why CEFs in general, and these three funds in particular, would choose to merge. Then I’ll give you my latest thinking on whether the “new” PDI is a buy, hold or sell (if you own it).

Because CEFs tend to be smaller, in terms of assets held, than ETFs, managers will sometimes combine them when they feel the total buying power of the new, bigger fund will lead to better investment opportunities.

That only makes sense. And in fact, if you’ve been following the CEF space for a while, you’ll know that a lot of oil and gas CEFs merged because they shrank in size due to the well-documented struggles of the oil and gas sector. But we haven’t seen many funds in other sectors do the same—and we certainly haven’t seen PIMCO merge any of its funds recently.

In addition to combining the assets of two different funds into a new fund, mergers will impact the cash flow and costs of funds. Because these three funds have different fee structures, PIMCO will need to harmonize them in the new fund.

The funds’ payouts will need to be harmonized, as well, but since they all yield in the same ballpark, between 8.5% and 9.2%, the new payout likely won’t be much different than the ones owners of these funds are currently getting.

The “new” PDI will have about $6 billion in total assets, which gives an economy-of-scale opportunity for investors. Since managing all those assets under one umbrella is cheaper than managing three separate funds, PIMCO can lower its management fees—and they announced they will, so the new fund’s management fee will be 1.1% of assets instead of the current 1.15%.

Those fees are much higher than those of a similar ETF, but there’s a good reason for that: these funds are just plain better. 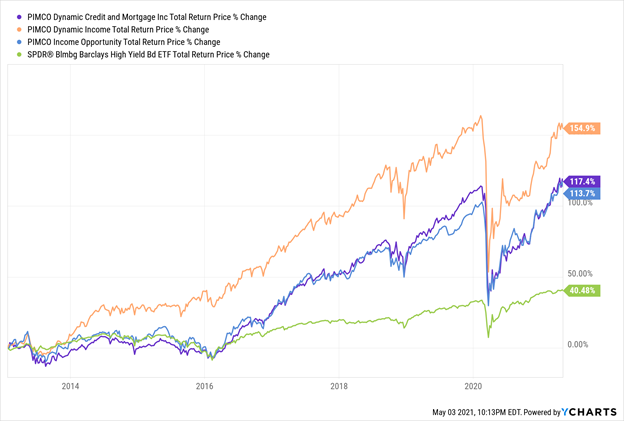 The closest index fund is the SPDR Bloomberg Barclays High Yield Bond ETF (JNK), shown in green above, which has returned nowhere near as much as the PIMCO funds over the long term, even though JNK charges a fraction of the fees the PIMCO funds do.

The cut in fees for the new fund should help PDI perform better than it used to, but the rather small cut (0.05%) may be too small to have any noticeable effect.

What’s more important is how this merger will impact the funds’ premiums. PDI is the most expensive of the three, with a 15.7% premium to NAV, but PCI’s 13% and PKO’s 14.4% aren’t far behind. The merged fund will likely have a premium of about 14%, meaning it’ll still be pricey.

What to Look Out for in a CEF

Even so, buying at a premium has the effect of capping your upside potential (and there is a small risk of the premium fading a bit due to market uncertainty over the new fund’s direction).

That’s why we always prefer CEFs that are priced at a discount to their NAV, especially if the fund you’re targeting is trading at a wider-than-usual discount and/or has traded at a premium in the past. That, by the way, is how things played out for anyone who bought PCI through Contrarian Income Report when Chief Strategist Brett Owens recommended it in 2016. Back then, it was trading at a 10% discount and has gone on to produce a 109% return on its way to today’s 13% premium.

For now, though, the best thing you can do as a CEF investor is to buy the next PCI while it’s still trading at a discount.

And you don’t have to wait to buy the next PCI, either, because I’ve uncovered not one but five “next PCIs”. These CEFs trade at totally bizarre discounts —even in this overbought market. In fact, their discounts are so out of line with their historical averages that I’m calling for 20%+ price upside from each of these five funds in the next 12 months!

Not only that, you’ll also grab a nice 7.3% average dividend (with one of these funds paying a gaudy 8.5%!) to go along with your upside, too.

Taken together, you could be looking at a 27% return in the next 12 months here, with dividends included!

Don’t miss out on these five bargain dividend payers. Go right here and I’ll share my complete research on all of them with you now: names, tickers, complete dividend histories and everything else you need to know.