This Stock Has a “Hidden” 6.1% Yield (and Rises With Interest Rates)

Today we’re going to bulk up our dividends—and position ourselves for some nice gains—with a group of stocks that pay us four ways as interest rates head skyward:

Let’s take that fourth point first, because as you likely know, the 10-year Treasury rate—which drives rates on everything from mortgages to car loans—is en fuego, having surged from 0.9% to more than 1.5% in less than two months.

Granted, a 1.5% Treasury rate would be considered low pre-pandemic. But now it has us choking on our morning coffee!

This is likely just the start.

Fed chair Jay Powell has said flat out that he wants inflation at 2%. This on its own will drive the 10-year rate higher. After all, who would buy a 10-year bond that pays 1.5% when inflation is running at 2%?

Here’s the twist, though: Powell can set the short-term rate, which he has basically anchored to zero.

But on the other end of the curve, he does not control long-term rates. He may say he can influence them by buying Treasury bonds, and to an extent he can, but the bond market is bigger than even his printing press. Over time, Uncle Sam issues more debt than Powell can buy.

That means the “spread” between the long and short end of the interest-rate curve will continue to widen—which leads me back to those “four-way payers” I mentioned off the top.

The companies we’re going to talk about have their profits dialed straight into the spread: the wider it gets, the more money they make! And you and I both know that where profits go, share prices follow.

These rising-rate winners break out into two groups. The first is bank stocks, which borrow at short-term rates (basically nothing), then loan that cash to customers at rates nearer to the long-term rate (something). The wider that gulf gets, the higher their lending profits go.

The other winners are insurance stocks: as long-term rates rise, these firms benefit because they invest the premiums they collect in, among other things, government and corporate bonds. And yields on those bonds rise with Treasury yields.

Those higher bond yields fatten insurers’ net interest margins, or the difference between investment returns and claims paid out to policyholders. The end result: higher profits—and (very likely) higher share prices to go with them!

Banks and insurers’ higher profits, in turn, fuel the three other ways they pay us, by supporting the current dividend and giving management the cash to grow the payout and buy back shares.

Repurchases, by the way, touch off another profitable feedback loop because they cut the number of shares outstanding, driving per-share earnings—and by extension share prices—higher.

Forget the Current Yield—Look to Shareholder Yield Instead

Let’s look at all of this in action with a bank we all know well: US Bancorp (USB). It yields 3.3% now, which isn’t bad as big banks go. But that’s just the start of what USB pays us, because management also buys back shares on the regular.

You can see that below: in the last 10 years, USB has bought back and canceled 22% of its shares, helping drive the stock to a near-double: 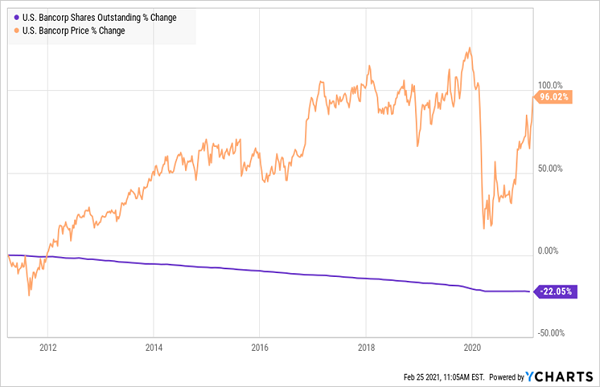 Those buybacks have also ballooned the bank’s shareholder yield, a critical (and way too often overlooked) figure I see as its true yield because it gives a fuller picture of what the company pays us. 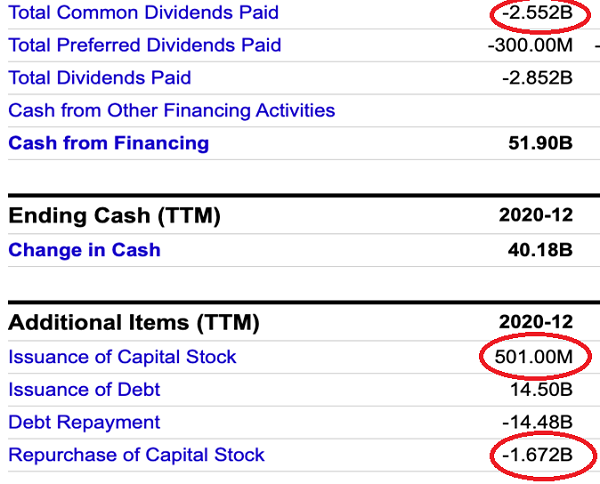 In USB’s case, this makes a massive difference: the bank’s shareholder yield comes out to 4.9%, much more than the 3.2% yield on its dividend alone.

Then there’s USB’s valuation: it trades at 1.62-times book value, or what it would be worth if it were broken up and sold. That’s still well below its pre-pandemic value of 1.8, suggesting the stock will see some additional upside as the recovery accelerates.

Speaking of rising rates, bear in mind that about 55% of USB’s revenue was interest income in the last 12 months, so those higher rates will make a considerable difference to the bank’s top and bottom lines.

Finally, don’t forget about dividend growth: USB has increased its payout 236% in the last 10 years, meaning folks who bought in 2011 are pocketing a 6.1% dividend yield on their initial buy today.

Another Rising-Rate Play Trading at 50% Off

We’ve got another, similar play setting up in insurance. Consider Lincoln National (LNC), payer of a 2.9% dividend yield but boasting a (shareholder) yield of 5.4% when you include the $1.3 billion in buybacks it undertook in the last year. Rising rates have given LNC shares a nice boost so far in 2021, with the stock easily topping the S&P 500: 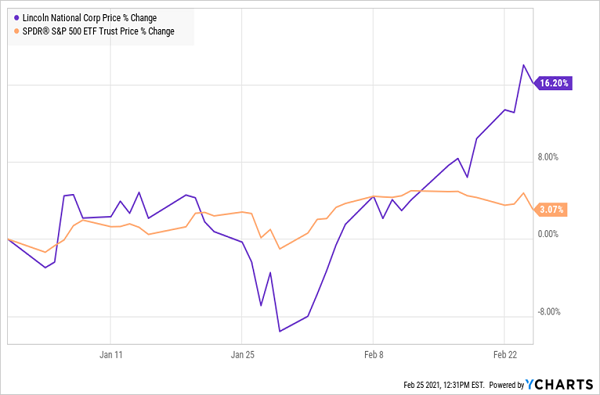 LNC has plenty of ways to keep its share price rising. In addition to being an obvious beneficiary of rising long-term rates, it can continue its dividend growth, thanks to its reasonable payout ratio of 58% of free cash flow.

And get this: as I write, LNC trades at just 48% of book value. In other words, you’re getting about half the company’s assets and its entire insurance business, which boasts 17 million customers, essentially for free.

This “All-Weather” 6.5% Dividend Is Your Best Buy as Rates Rise

You won’t find my favorite bank stock among the big names of Wall Street. It’s a smaller bank that knows its customers well—they’ve been trusting it with their life savings since it was founded during the Great Depression.

Here’s something else it has over the big banks: a whopping 6.5% dividend—and its last payout hike was a gaudy 8% (I expect another dividend raise as soon as this summer!).

This “All-Weather” stock is also ridiculously cheap, but I expect that to change fast now that thousands of investors are combing the banking sector, on the hunt for the best ones to cash in on rising rates.

Don’t miss your chance! Click here and I’ll tell you everything you need to know about this 6.5%-paying “All-Weather” pick, including its name, ticker and the kind of return you can expect, year in and year out, on a buy made today.