There’s a quiet shift happening in closed-end funds (CEFs)—and it’s primed to give those who buy now some very nice upside in 2023.

And that’s in addition to the rich 7%+ dividends CEFs hand us.

That trend is a shift toward share buybacks, which you likely know about from the stock world. Buybacks work similarly with CEFs, but with an extra punch: they keep CEFs’ discounts to net asset value (NAV) from getting too wide—and they can even narrow those discounts, slingshotting the share price higher as they do.

In other words, by helping close CEFs’ discounts, managers have some control over the fund’s market price in a pullback, and they can amplify its gains when the market turns higher.

The buy-rated equity funds held by our CEF Insider service will be among the biggest beneficiaries of this new buyback spree, particularly those managed by BlackRock, the world’s biggest investment firm, as we’ll see shortly.

As I write this, BlackRock is leading the way on the buyback front, snapping up over $100 million worth of shares across 15 of its CEFs in the last quarter of 2022.

When a company with the size and expertise of BlackRock makes a move like this, it pays to take notice, because there’s only one reason why they would do it (two, actually):

Already, we can see the effect of these moves: check out the discount on the BlackRock Science and Technology Trust II (BSTZ), payer of an outsized 13.5% dividend, this year. 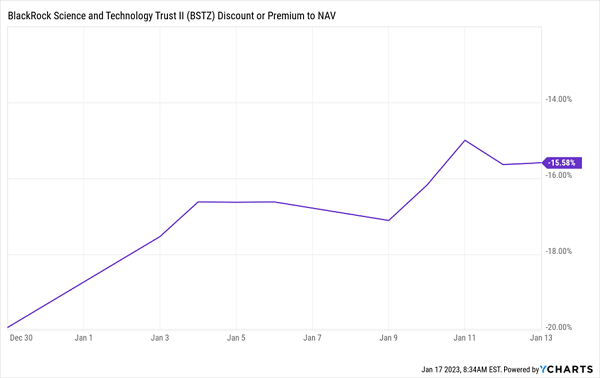 That shrinking discount grabbed investors’ attention, prompting them to buy in and drive a quick 9% gain in the fund’s market price, as of this writing: 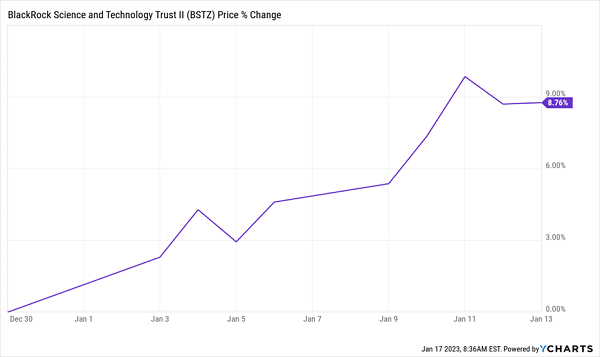 When a fund buys back shares from investors, it can actually create value when those shares trade at a discount.

To explain this, let’s use a quick example. Imagine a CEF that has $100 worth of shares in total and each share trades at a dollar each, and at a 10% discount to NAV. Management realizes this and buys back shares, holding them until the fund returns to a premium—let’s say a 10% premium for our example.

The potential profits can be significant indeed.

Just by buying the shares at a 10% discount, holding on to those shares and waiting for the fund to go to a 10% premium, a CEF can earn strong profits without actually investing in the market at all. 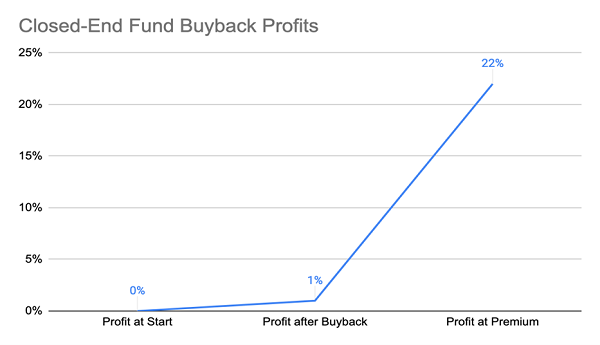 Of course, this only makes sense when discounts are unusually wide, like they’ve been in the past year. When funds trade at par, buybacks have little effect, and when a CEF trades at a premium, buybacks actually destroy shareholder value.

In the case of BSTZ, you can see why BlackRock is engaging in a buyback: the fund started 2022 at par and ended the year at over a 20% discount.

Buybacks on the Rise Across the CEF Space

CEF buybacks are also growing in size and frequency. BlackRock, for example, has authorized buybacks of up to 5% of outstanding shares in many of its CEFs, and managers from other firms have told me that aggressive buybacks are being set up throughout the CEF world.

If you are already invested in CEFs, you’re poised to benefit from this trend in 2023. If not, you still have time to get in. In the case of BSTZ, even if it resells those repurchased shares at par a year from now (a reasonable estimate, given that this is where the fund started 2022), it would equate to a 20% gain in the market price. And investors who buy the fund now would see the same gain, to go along with their 13.5% payouts.

5 Cheap Monthly Payers (Yielding 8.9%) That Could Be the Next Buyback Targets

With buybacks springing into motion across the CEF space, NOW is the time to buy. And I’ve got 5 CEFs that should be at the top of your list. All 5 are outright bargains, which will prime them for 20%+ upside in the next 12 months. Their cheap valuations will also tempt their managers to give them a nice “buyback boost” in the coming weeks.

These 5 CEFs also offer outsized 8.9% dividends, and they pay dividends monthly, right in line with our monthly bills.

These funds are the best buys you can make as 2023 unfolds, and I can’t wait to share them with you. Click here and I’ll show you how you can download a FREE Special Report revealing their names, tickers, current yields and more.