This Popular Fund Just Cratered 13% … and It Will Go Lower

Something tragic happened at the start of this month—but it’s such a familiar tragedy that no one should have been surprised.

If you held the PIMCO CA Municipal Income III Fund (PZC), however, I bet you were surprised—and now you might be panicking. A closed-end fund (CEF) that was soaring for months all of a sudden crashed, going from being up 12% year-to-date to down 2.8%: 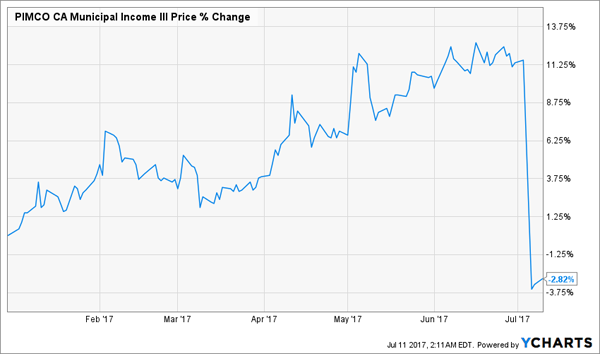 Until July 3, PZC was one of the best-performing municipal-bond funds in the world. While the CEF Insider Tax-Free Bond Index was up 6.1%, PZC had nearly doubled it, gaining a stunning 11.6%.

So what went wrong?

The biggest problem by far was the fund’s market price.

Investors who blindly looked at their brokerage accounts and lauded PZC’s double-digit gain in half a year were easily fooled, because the CEF’s actual portfolio (as measured by the fund’s net asset value, or NAV) has been pretty much flat for most of 2017: 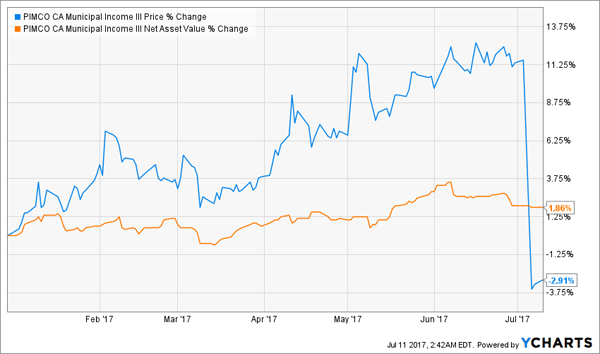 I’ve recommended several municipal-bond CEFs to CEF Insider subscribers that have beaten this NAV performance, so the weak increase in PZC’s NAV didn’t impress me at all.

Add in the fact that the fund’s market price kept rising and rising, and folks who bought in late were certainly headed for disaster.

In many cases with CEFs, this disaster is the result of a lot of bound-up pressure from overbuying that inevitably results in a massive selloff. That happened earlier this year with PIMCO’s GlobalStocksPlus & Income Fund (PGP), which had a similar double-digit decline over a couple days in June.

(I warned about PGP on June 1, less than two weeks before the fund collapsed).

In PZC’s case, however, the crash happened because of a sudden announcement: PIMCO was cutting the fund’s dividend.

The company has done this before with other funds, so it wasn’t really shocking. Still, if you were holding PZC, disaster had finally struck: the dividend was being slashed by 25%, to $0.045 monthly from $0.06. The fund now yields 4.9%, based on the new rate.

This isn’t the first time PZC’s dividend has been cut, but the last time was back in 2006, so investors had grown complacent. When they saw their income stream suddenly decimated, they rushed the exits.

PZC’s selloff hasn’t spread to other PIMCO funds, but perhaps it should; in the last two months, PIMCO has cut distributions on two of its most popular funds, including one that, like PZC, hadn’t faced a cut in over a decade.

More cuts to other PIMCO funds wouldn’t surprise me. But could we have predicted this slash to PZC’s distributions?

Remember that municipal-bond CEFs pay out dividends by earning income from the bond portfolio they hold, net of fees. The problem is that the net investment income (NII) that PZC has earned, which is the accounting term for the fund’s earnings from its bonds, was too low. When it was paying $0.06 per share every month, its dividend-coverage ratio was below 100%; after the cut, it’s 120%:

Ironically, that makes PZC an interesting speculative play right now, since investors are still smarting from the selloff, but it’s still way overpriced at an 11.4% premium to NAV: 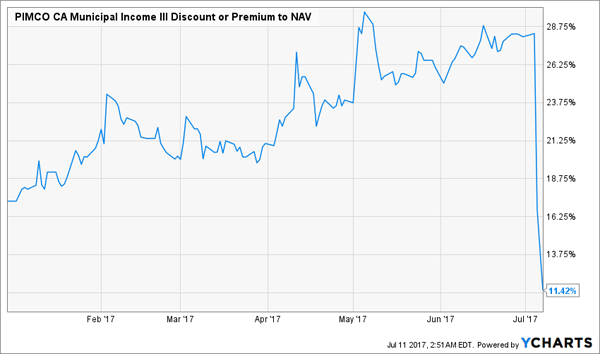 Since many CEFs are trading at a discount, this one is still too expensive to consider now. But why is this fund expensive at all, considering its recent dividend cut and the fact that its investment income was so disappointing?

It’s a Fund, not a Handbag

The simple reason is in the name: PIMCO.

PIMCO is one of the largest investment managers in the world, with over $1.5 trillion in assets under management. The company also has some of the world’s best-performing funds.

Additionally, PIMCO is headquartered in California and works hard to sell funds on its home turf, so it’s no surprise that a PIMCO California muni-bond fund would be particularly popular.

But here’s the problem: just because a fund has PIMCO in its name doesn’t mean it’s worth buying. Plenty of people pay a huge premium for a brand name—but sometimes buying the brand makes no sense.

Sure, if you’re buying a handbag to impress someone, you have no choice but to go for the Gucci or Louis Vuitton option. But we’re not buying funds to impress anyone; we’re here to make money. And when it comes to choosing a fund that will make us money, the brand won’t always be enough.

This is the case with PIMCO.

Some of the company’s funds are outstanding, and many are good buys every once in a while, when the market has oversold them during a panic. But PZC has been one of the most overbought funds of 2017, having one of the highest premiums to NAV in the sector, as we discussed above.

But all investors had to do was take a look just a little deeper to see that its investment income wasn’t covering its distributions—a clear signal that it’s time to cash out and find an alternative.

Those who did before PIMCO cut distributions walked away with a tidy profit … and those who didn’t were left holding an empty brand-name bag.

There’s no reason to even look twice at a dog like PZC when there are so many other “true” bargains in the CEF space.

And I’ve just showed you a few of the things you need to look for if you’re planning to go it alone and uncover these bargain high yielders yourself.

But here’s the good news: you won’t have to lift a finger, because I’ve done all the legwork for you!

After sifting our way through the more than 500 active CEFs out there, my team and I have filtered out 4 we see as absolute MUST buys now.

These truly are the best of the best—and each of these 4 dynamic cash machines clobbers PZC on the yield front, throwing off an average payout of 7.5%!

You won’t have to worry about the stomach-churning dividend slash PZC’s investors just suffered through, either, because these dividends are safe—and GROWING.

So here’s all you need to do.

Make these 4 easy buys now, then sit back and start collecting your 7.5% income stream. And then, over the next 12 months, watch the share price soar as other investors—attracted by the same gaudy yield that caught our eye—pile in.

The result? By next summer, you’re easily looking at a 20%+ price gain here—on top of that incredible 7.5% income stream!

The full story on all 4 of these funds is in a new FREE report I just issued called “4 Great CEFs to Buy Now: 7.5% Yields and 20% Upside Ahead.”

The title says it all—and I can’t wait to show you these 4 retirement lifesavers. Go here now to get your own copy of this free special report and learn all about these 4 “undercover” funds.