This Popular 9% Payout Is About to Shrink

Imagine an investment that can double in value in 5 years while giving you a 12% income stream that has actually grown over time.

And what if I told you there are a lot of these investments out there? They’re just not well known.

The reason for that is that they’re closed-end funds (CEFs), an investment that isn’t as popular as mutual funds because most 401k plans don’t offer them. And they’re far less popular than exchange-traded funds because they’re just a little more complicated than something like the SPDR S&P 500 ETF (SPY).

ETFs like SPY are easy to set up and manage, which makes them cash cows for issuers like Blackrock, Vanguard and State Street, even though ETF fees are relatively low. That’s because these funds simply track a stock index. And being restricted to common stocks, there’s a limit to how much they can yield, since even the highest-yielding large caps don’t pay much more than 4% themselves.

If you want higher income, you’ll have to consider other assets.

But that doesn’t mean you have to take on more risk—which is where the beauty of CEFs comes in, because in addition to regular stocks and bonds, they invest in assets that aren’t bought and sold on open stock exchanges but aren’t necessarily higher risk than what’s traded on those exchanges, either.

And that’s how one legendary CEF paid that 12% income stream I told you about off the top—and has nearly doubled in value over the last five years, too. The fund’s name is the PIMCO Dynamic Income Fund (PDI), and the five-year anniversary of its IPO is coming up in a few weeks.

Where did those big returns come from? Dividends, not capital gains, were the main driver, accounting for 83% of the fund’s total return: 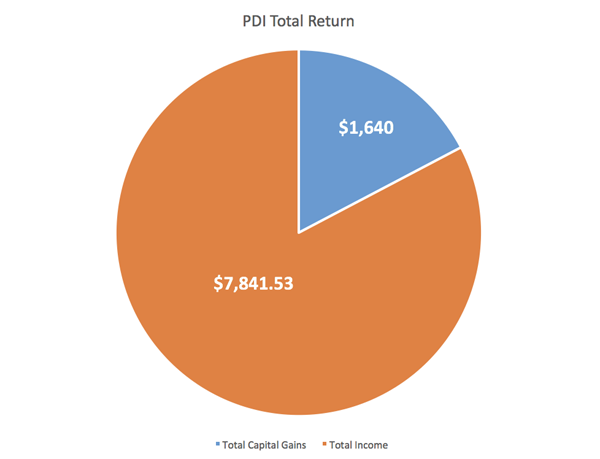 That’s spectacular, but it gets better. Dividend payments on ultra-high-yield investments tend to stay flat or go down, and many of PIMCO’s other high-yielding CEFs have cut their distributions.

So since PDI yields 9% now, excluding special dividends (I’ll get to that in a minute), you’d naturally think it would follow suit, right?

Wrong. PDI’s payout has actually gone up 25% in the last five years: 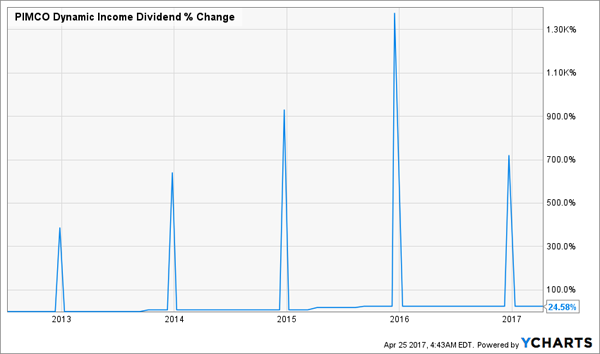 Notice those big spikes at the end of every year? Also notice how they got bigger and bigger until last year? Those are the fund’s special dividends, and they’re why PDI has yielded a whopping 12%, on average, since inception.

Those special dividends are paid out from what’s called undistributed net investment income, or UNII. Like any closed-end fund, PDI collects income from its investments throughout the year and pays dividends from that income as time goes on.

Many CEFs pay out more income than they actually get from their investments, making their UNII negative. When this happens, fund managers inevitably need to cut distributions. PDI, on the other hand, has had more investment income coming in than it’s been paying out, which means there’s some extra left over for investors at the end of each year.

As of the end of March, PDI had $0.21 per share in UNII, meaning the fund is still out-earning its dividend. This is a quality fund that has been beating the market while paying one of the biggest, most sustainable dividend yields out there. Anyone who has ridden the PDI train has received a flood of cash for their troubles.

But however impressive the fund’s track record, that doesn’t mean it’s a screaming buy right now.

As much as I love PDI and want to celebrate its fifth birthday, there are a few reasons to choose other CEFs instead.

One of the best things about PDI was that you could buy it at a discount for most of its history. That made reinvesting your dividend income even more compelling.

Sadly, those days are over.

PDI used to be a “hidden gem” whose obscurity meant that the market priced it far below its net asset value (NAV), despite its massive earnings potential. Just look at its historical market price and NAV per share: 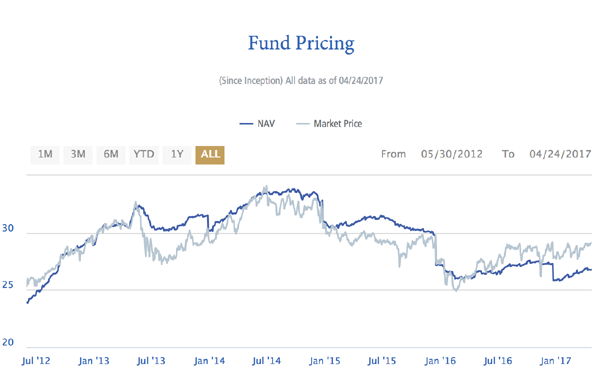 The market has finally started recognizing this fund’s amazing performance, so it’s priced at a premium.

That’s a shame, but fortunately there are other great CEFs that are priced at a discount. And we’re going to look for those instead of PDI now.

Reason #2: Special Dividends Could Get a Lot Less So

As I mentioned, PDI is still out-earning its dividend. But it isn’t doing so by very much—it’s accumulated just an extra month of dividends following its special dividend payment in December.

If we assume its income will exceed its dividend at the same rate for the rest of the year (that’s probably overly optimistic, by the way), the fund will have $0.84 in extra income to pay out as a special dividend by the end of 2017. That’s just 58% of what the special dividend was in 2016.

And, as you can see from the dividend history chart above, 2016 saw the special dividend go down for the first time in PDI’s history. If it goes down again in 2017 and again in further years, this fund’s impressive 14.7% annualized total return will be smaller and smaller—especially since capital gains from a higher premium to the fund’s NAV are less likely, because the premium is already high now.

Reason #3: There Are Better CEFs Out There

Of course, any investment should only be made when it seems better than the alternatives. And back in 2012, when PDI started, it was clearly the best alternative in the market.

The reason was simple: back then, the market was too scared to invest alongside PDI, creating a massive mispricing the fund could take advantage of. We have a more aggressive market now, which means PDI’s edge isn’t as sharp as it used to be. Fortunately, other funds have a sharper edge thanks to the market’s changing whims, so there are still great buys in the high-yielding CEF universe.

These 4 CEFs Are Primed for FAST Double-Digit Gains!

But that huge gap won’t last—and PDI is the perfect example of what happens when a CEF’s discount to NAV slams shut: its share price takes off!

The difference? I don’t think you’ll have to wait five years to double your money with these 4. I see their gains coming a lot faster—and you’ll still be collecting their fat 7.6% dividends while you wait!

But these 4 hidden gems are already starting to see their discounts narrow, which means the herd is starting to catch on. There’s not much time! You NEED to click here and make sure you get the names of all 4 of these 7.6% yielders now!