2020 has turned on a dime, and we dividend investors need to pounce now to set ourselves up for the big dividends and fast upside in 2021.

With a (mostly) settled presidential election and a vaccine for the virus, the strong buying opportunity we’ve waited on for 7 long months is finally here.

So what, exactly, should we be buying?

Let me show you the strategy I’ll be following in the coming months, along with three tickers—one of which has grown its payout an amazing 638% in just five years—poised to deliver big upside and dividends.

Divided Government Will Ignite Our Returns

No matter where you stand on the election—and I’d repeat that we always set aside our politics and approach things purely as investors here at Contrarian Outlook—we’ll likely have a divided government, with a Republican Senate and Democrats holding the House and presidency.

As I wrote last week, we haven’t seen this combination since 1889. But we came close from 2011 to 2015, when Democrats held the Senate and White House and Republicans controlled the House. That helped stocks return 76% in just four years! 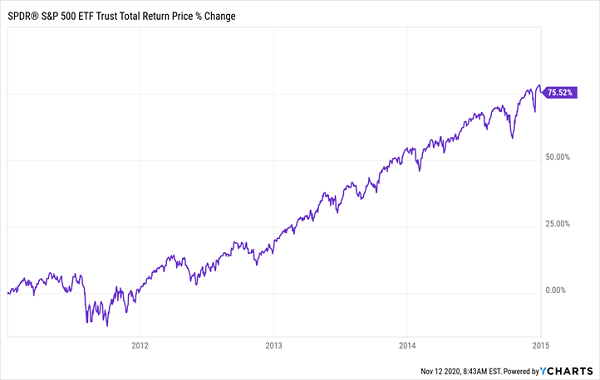 I think we’ll likely see a similar setup this time. That goes double now that we have a vaccine for the virus!

Vaccine Will Trigger a Wave of Buybacks (and Dividends)

As you know by now, clinical trials at Pfizer (PFE) showed the company’s vaccine is 90% effective in preventing symptomatic COVID-19. It won’t arrive for six months or more, and, yes, something could still go wrong. But bear in mind that we have nine more vaccines in Phase 3 trials and will likely hear good news from one or more of them soon.

The vaccine news will spur growth because companies now have a timeframe, which lets them set development plans, book marketing campaigns and, yes, prepare dividend hikes as the vaccine starts to ship.

And companies have a boatload of cash to power their post-pandemic plans. According to S&P Dow Jones Indices, S&P 500 firms (excluding financials) were sitting on a record $1.89 trillion at the end of the second quarter. As we move into 2021, we could see a big slice of that cash roll out as buybacks and dividends.

So what do we buy in an environment like this?

To set ourselves up for maximum gains (and dividend growth!), we’re going to zero in on stocks with what I call “relative strength.”

Relative strength essentially means that strong stocks tend to stay strong, giving them a solid base from which to jump. Forget the bargain bin—we’re not looking for low P/E ratios here—just stocks that have momentum, driven by surging trends in society and their sector.

Everybody loves betting on a long shot, but the trouble is, these underdogs simply don’t come in enough to pay. We like strong stocks, management teams and megatrends. But everybody wants those, so where do we find our edge?

Let’s dive into the three names I have for you now.

Broadcom makes chips and software for storing data and connecting servers and data centers. It also churns out components that help manufacturers automate their operations, such as motion-control sensors and Ethernet connectors.

The company is at the center of so many trends it’s hard to know where to start!

The rollout of next-generation 5G networks? Check. Automation? Check. Working from home (which is here to stay, by the way, even with a vaccine)? Check. And not least, its storage products are a direct play on the unstoppable growth in the amount of data we all generate every day.

Despite this (and the fact that Broadcom generated record free cash flow in the second and third quarters, despite COVID-19), investors tossed the stock in March, and it still trails both the Technology Select Sector SPDR ETF (XLK) and other semiconductor leaders, like Texas Instruments (TXN), on the year. 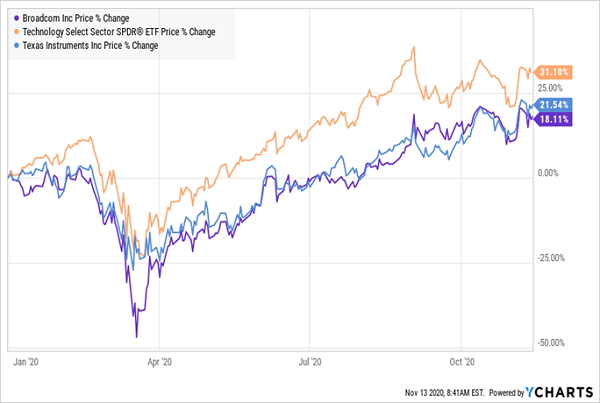 But the stock’s relative strength has shown up since: it’s clobbered XLK since the spring and widened its lead in recent months: 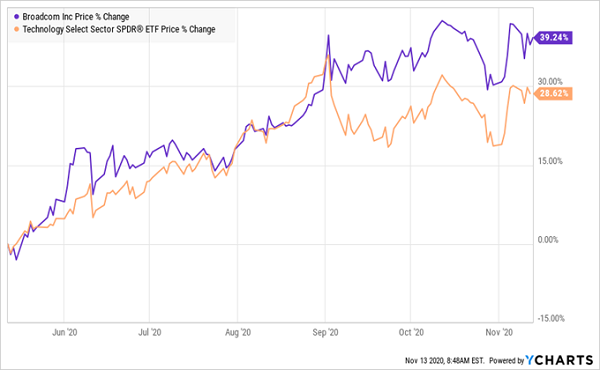 One more thing: Broadcom has sent its dividend—current yield: 3.5%—soaring 639% in the last five years. That makes it a decent income play now and an even better one in the long run: folks who bought just five years ago are yielding 10.8% on their original buy, thanks to its stellar payout growth!

But even if you don’t hold that long, you’re nicely positioned here, as Broadcom’s payout growth is likely to pull in more investors, who will bid its stock price higher.

Broadcom pays 48% of its growing free cash flow as dividends now, so it has plenty of room for more hikes. Management usually announces raises in early December, making now a good time to pick up shares.

All real estate investment trusts (REITs) took a hit in the spring selloff, as investors saw shopping malls empty out across the nation and proceeded to paint all REITs with the same brush. Even COVID-19 beneficiaries, like medical-office REITs, took a hit. Physicians Realty Trust was no exception: it saw a steeper selloff than the sector as a whole in the spring:

DOC Gets Tossed Out With the Mall REITs 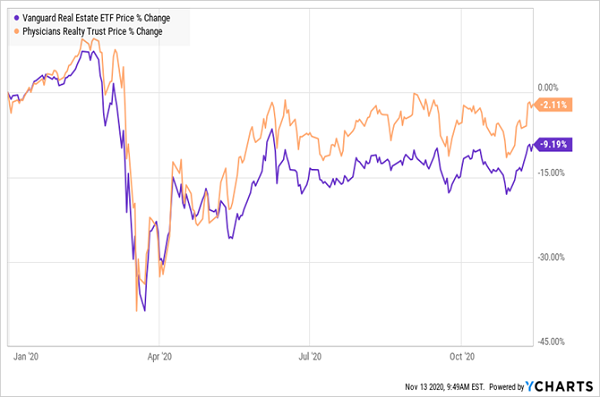 But investors soon realized their mistake and moved back in, just as they did with Broadcom:

Relative Strength From a Mislabeled Stock 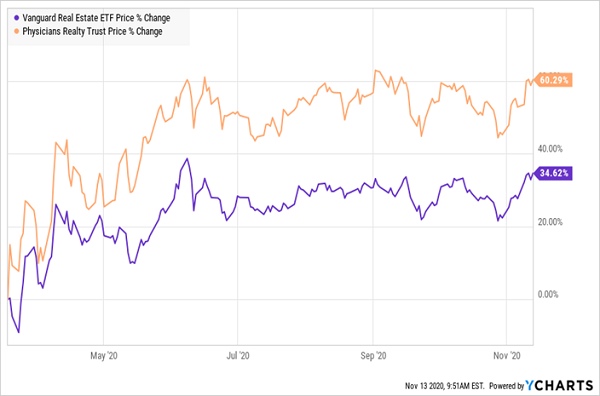 There’s good reason for this rebound: DOC’s management team wasn’t chasing down tenants for rent—far from it! The company has collected 97% or more of its rent every month since the pandemic hit, and boasts a 96% occupancy rate as I write this.

And there are plenty of reasons for more upside.

For one, many of DOC’s properties are aimed at outpatient care, which is growing fast as more procedures are done outside hospitals. Ambulatory surgical centers (ASCs), which provide day procedures or those requiring a short stay, are a good example: Deloitte sees the ASC market growing 6% annually through 2023.

DOC yields 5% today. Management hasn’t raised the payout since 2017, but that could change post-pandemic, when DOC can shift its focus back to growth. Meantime, the stock yields nearly triple what the typical S&P 500 stock does, so you’re getting a healthy income stream either way.

Meantime, DOC’s cash flow easily supports its payout. And with a 5% yield and price stability—DOC sports a five-year beta rating of 0.81, making it 19% less volatile than the S&P 500—you’ve got a nice “bond with upside” setup here. That’s a potent lure for weary investors after this year’s wild swings.

To say Dow took it on the chin in the spring would be an understatement: from the start of the year to the trough of the selloff in March, it shed nearly 60% of its value! That’s partly because China—where the company does a significant amount of business—bore the brunt of the pandemic earlier than the rest of the world.

But China also recovered faster than the rest of the world, and that’s helped drive Dow’s relative strength since: the stock has surged 132%, clobbering the S&P 500:

Dow Leaps Off the Mat 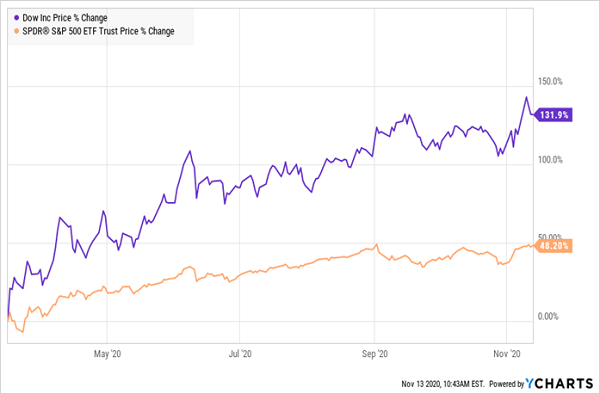 And despite that rise, Dow still trades below where it was in January.

That’s one predictor of continued relative strength. Another? The company is a no-brainer pick as a rebound play, as industrial chemicals will be in high demand as the economy recovers—and especially as a new stimulus package will likely include a large dollop of infrastructure spending.

Dow’s brighter prospects show up in analysts’ call for a 90% rise in earnings in 2021 over its forecast 2020 profits. That’s another overlooked factor that, should it hold up, will give the stock a nice lift.

While you wait for your upside, you’ll benefit from Dow’s ironclad dividend, which has held up nicely, despite all that 2020 has thrown at it: Dow yields 5.5% as I write this, and the payout well supported at just 42% of free cash flow.

REVEALED: How to Make a PREDICTABLE 15% a Year (Bull or Bear!)

I know 2021 looks promising, and I do expect a vaccine (or vaccines!) and divided government to boost the stock market—including the 3 stocks above.

Remember that many folks were bullish on 2020 a year ago—and look where we ended up!

I’m not saying we need to put away the punch bowl here. But we do need to throw just a little downside protection into our nest eggs. Because the truth is, no one’s market prediction is perfect. (And if you do run across anyone who says they know for sure what stocks will do next, run away!)

This is why I urge you to pick up the 7 “recession-proof” dividend growers I’m pounding the table on today. I’ve handpicked every one to hand you predictable returns of 12% to 20% a year in a bull or bear market!

This 7-stock “mini-portfolio” puts the power in your hands. You’ll get 7 “relative strength” picks poised to:

All seven of these low-key dividend growers are bargains now, but that won’t last as the bull continues to run into the new year.

Holding back now means running a serious risk of missing the biggest gains. Don’t let that happen: Get full details—names, tickers, complete dividend histories, best-buy prices and more—on all 7 of these stout dividend growers now. You have everything to gain, and nothing to lose, by giving them a look.