I get plenty of questions about specific closed-end funds from members of my CEF Insider service, which focuses on quick-moving smaller CEFs (here I mean those with sub-$1-billion market caps).

We love these CEF “small fry” because they hand us big dividends (7%+ yields are common in this corner of the CEF market) at a bargain, because these funds get little coverage from Wall Street and the mainstream media.

But when they do get “found,” their discounts disappear fast, catapulting us to some nice price gains to go along with our big payouts.

Recently, a reader wanted my take on the PIMCO Dynamic Income Opportunities Fund (PDO), which boasts a 6.5% dividend yield and was launched in late January 2021. You’ve probably heard of PIMCO: it’s an asset manager that’s the opposite of small and off-the-radar, with over $2 trillion under management.

And while PDO is outside our usual “small CEF” range (it has around $2.2 billion in assets), I’m always happy to take questions on all CEFs from CEF Insider members. So let’s dive in.

Aside from its heft, PIMCO also has plenty of expertise and research resources at its disposal, as we can see from the performance another of the company’s CEFs: its cornerstone PIMCO Dynamic Income Fund (PDI), a 9% yielder that’s delivered a strong total return since it was founded in 2012: 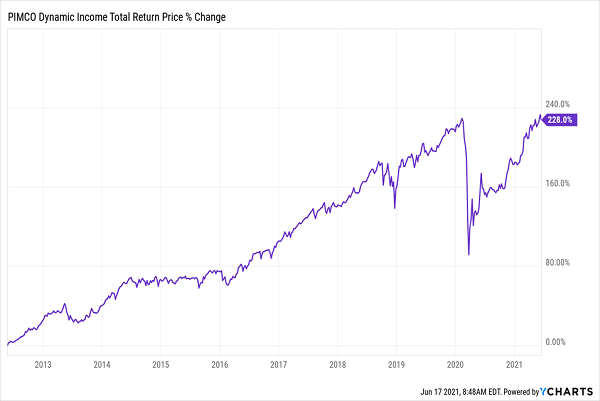 I mention PDI here both to draw your attention to PIMCO’s record (we’d be remiss to discuss PIMCO without mentioning it) and because it’s quite similar to newly launched PDO. Like PDI, PDO is a bond fund, and like PDI, PDO relies on PIMCO’s expertise in analyzing the future of interest rates in America and around the world to deliver a strong return.

And so far, it’s doing pretty well. Or so it seems. 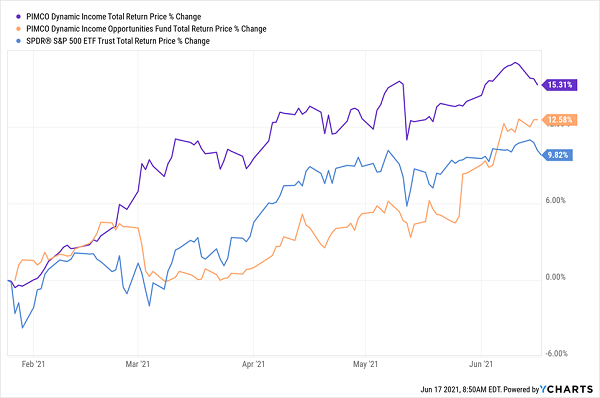 Looking at the fund’s total-return price since inception—that is, its market price including price gains and dividends paid out—PDO (in orange above) is off to a solid start. It isn’t way ahead of the S&P 500 (in blue) like PDI (in purple) is, but it’s still ahead, and its advantage seems to be growing.

But there’s a twist here because CEFs trade at a market price that’s often different from the net asset value (NAV) of their portfolios, meaning they can (and almost always do) trade at a discount or premium. And PDO’s total NAV return has lagged a bit:

…. But a Look Into Its Portfolio Reveals a Different Picture 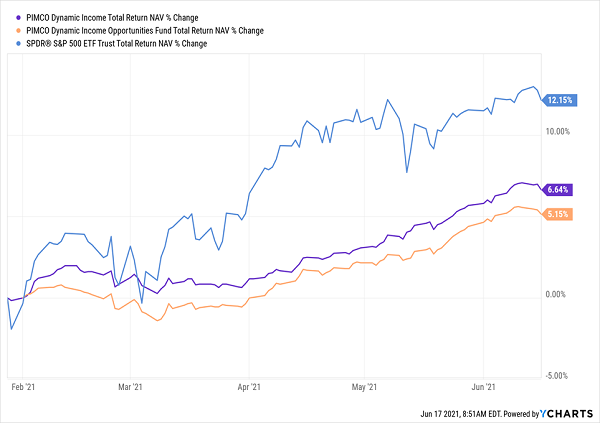 With a 5.15% return (shown in orange above), it’s performing less than half as well as the market (in blue), and it’s behind PDI (in purple), too.

So why the higher price return? It comes back to PIMCO and, for want of a better term, brand recognition.

As I write this, PDO trades at a 7.2% premium to NAV. That’s right: investors are willing to shell out $1.07 for every dollar of PDO’s assets. That sounds absurd, but it’s normal for PIMCO funds because the company is a big name in the CEF world; its other funds trade at much higher premiums (10%, on average, with some boasting premiums as high as 17%).

Short-Term Gains Could Be Ahead, but Mind PDO’s Limited Term

Now it is true that PDO’s premium has been rising toward the 10% PIMCO average since its January launch, and it looks like it’s closing in on that level as its market price outraces its NAV.

Will that pattern continue? While the fund is led by a great team with a strong track record, there is something of a built-in cap here: unlike PIMCO’s other CEFs, PDO is a limited-term fund that will liquidate in January 2033. And limited-term funds tend to trade at smaller premiums and discounts, and those deviations narrow over time.

So while PDO’s 7.2% premium could grow in the next few months, its premium will eventually disappear, and by 2033 it’ll go to zero. You can bank on it.

So where does that leave us? With a fund that could be a compelling swing trade for quick profits. But if you buy, you should be ready to sell fast because that 7.2% premium will disappear sooner or later.

Limited terms are something you don’t have to worry about when you buy the 5 other CEFs I’m pounding the table on today. These bargain high-yielders throw off a 6.7% dividend between them, with the highest yielder of the bunch delivering an 8.2% payout!

These funds are cheap, too—so much so that I’m calling for 20%+ price upside from each of them in the next 12 months. Quick price pops on that scale are common in smaller CEFs, which is why we focus on them.

When you throw in the big dividends you get from these 5 picks, you could be looking at a quick 27% total return here!

Now is the time to buy these funds. I urge you to pick them up now, while they’re still cheap. Click here to get a free investor report giving you the full story on these 5 high-yielding CEFs, including their names, tickers, complete dividend histories and everything else you need to know.