This 5.1% Payer Thrives on Inflation (You Won’t Believe How)

Far too many investors think inflation is bad news for closed-end funds (CEFs), for a simple reason: they fear it’ll boost CEFs’ borrowing costs. (Because CEFs, of course, use leverage to varying degrees.)

That sounds like a reason to worry. Inflation, after all, boosts interest rates, and higher rates obviously mean CEFs would have to pay more to service their loans.

Not so fast! Because nearly everyone forgets the other side to the story—that inflation (at least these days) comes with a strong economy—and that drives investment returns that’ll more than offset any small rise in CEFs’ borrowing costs.

Today we’re going to look at what today’s inflation picture means for our CEF Insider portfolio. Then we’ll look at a CEF with a 5.1% dividend that’s perfectly set up to profit in this new high-inflation, high-growth world.

Forget the Hype: Let’s Put This Inflation “Surge” in Context

One thing that’s hanging up a lot of investors these days is the size of the latest inflation spike: a 5% jump in May, the biggest rise in consumer prices since 2009. But we need to look beyond this one number to get the real story, something the market (for once!) seems to get. Stocks are headed upward, even with rising fears over inflation and rates: 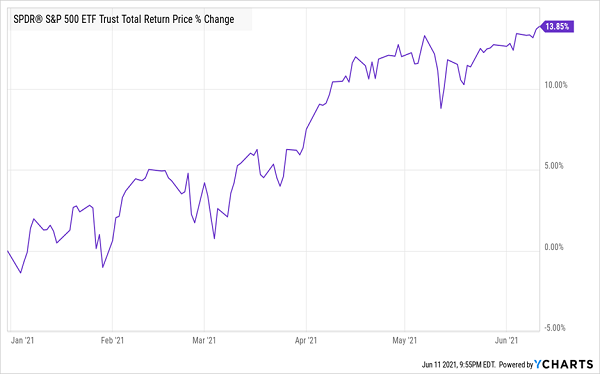 That’s our first cue that these inflation fears are overwrought. The other thing to bear in mind is that inflation isn’t as bad as it looks, if you look at May’s 5% number in context. 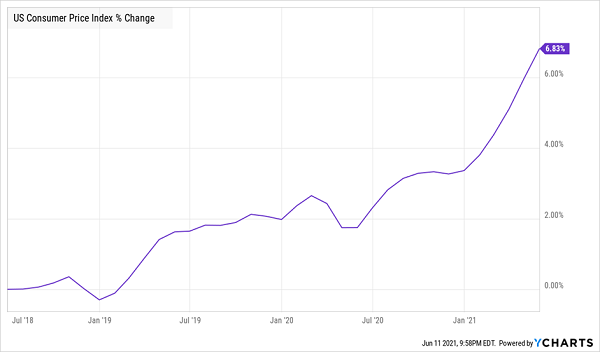 Because May 2021’s number is compared to prices to May 2020, when the pandemic’s economic wallop was hitting full force, it’s easy to see a big spike. Longer term, however, inflation is muted. Over three years, we’ve seen just 6.8% inflation, or 2.2% annualized, which is much closer to the 2% rate the Federal Reserve has set as its target.

That’s set up one half of our favorable setup for CEFs. Now let’s look at the other side of our CEF ledger: the strong economy I mentioned earlier. 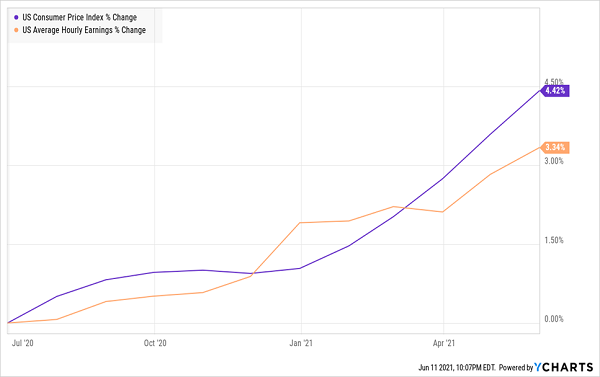 We’re seeing average hourly earnings, in nominal terms, rising at a higher rate in recent months as pay rises to match the higher cost of products and services. Of course, this is no surprise; there has been an endless parade of stories about employers desperate for help, sign-on bonuses being offered for certain jobs and an overall stronger position for workers.

It remains uncertain how much we can pin the recent price rises to these higher wages, but early data suggests that higher pay is a big contributor. That does drive companies’ costs up, to be sure, but it’s also a type of inflation that drives up consumer spending, too—and by a lot! 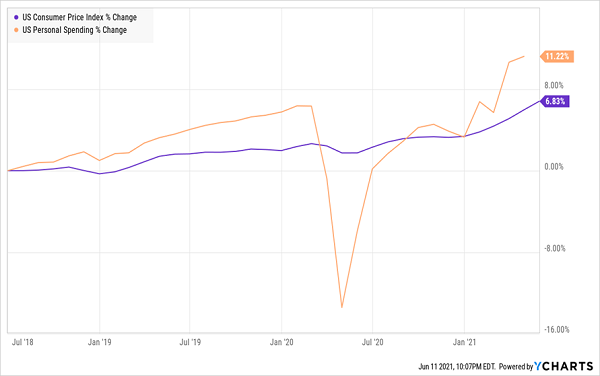 This indicates a vibrant economy of people going to shops and buying things, and with vaccination rates still rising in the US, you can expect more consumers to do so. Which, of course, is great for stocks.

About That “Watch-List” CEF … 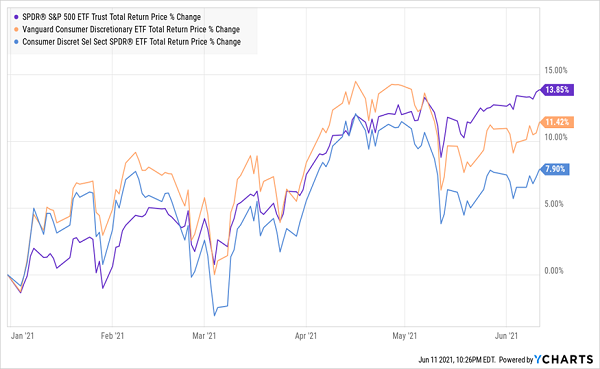 One problem with these funds is that they both have Tesla (TSLA) as their second-largest holding, and Elon Musk’s company has been a major underperformer. 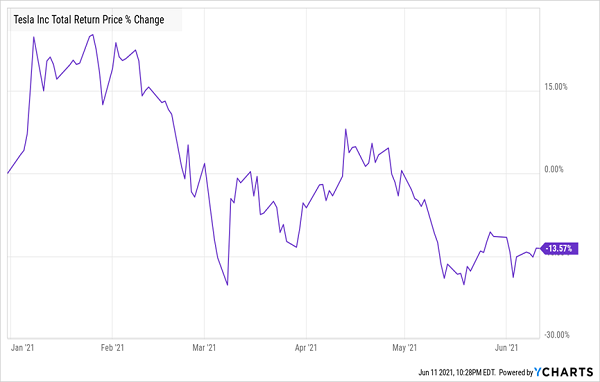 While Tesla was obviously a great buy in 2020 (or, for that matter, since its IPO), the stock is being hit now, shortly after it was added to these ETFs.

This kind of situation, of course, is why we prefer CEFs! Their managers can step out of stocks like Tesla when they tumble, and are also free to build more balanced portfolios, untied, as they are, to a major index.

And then there are the dividends. Consider a fund like the BlackRock Enhanced Capital and Income Fund (CII), whose 5.1% yield dwarfs those of the ETF options. And it’s much better balanced, with Microsoft (MSFT), at 6% of total assets. It also gives you some nice consumer-discretionary exposure through Amazon.com (AMZN), the biggest constituent of the sector, as well as one of the best ways to play rising spending: Visa (V), whose network handles a large slice of American retailers’ transactions.

The topper is that CII’s management team sold out of Tesla before its latest dive—a smart move that helped it sidestep a drag on its net asset value (NAV, or the value of its underlying stock portfolio).

Strong as CII is, it’s still not quite cheap enough to tempt us, with its 3.3% discount to NAV. Instead, let’s pick up 4 other CEFs that yield a healthy 7.7% today. That crushes CII’s 5.1% payout, and gets you a livable income stream on a reasonable nest egg—with, say, $500K saved, you could pull in a steady $38,500 a year in dividends!

What’s more, these 4 funds are even better positioned than CII for big gains due to their ridiculous discounts—they’re so cheap now that I’m calling for 20%+ price gains from each of them in the next 12 months!

These surprising picks are retirement game-changers, and full details are just a click away. Get the full story on these 4 high-yield CEFs, including names, dividend histories, tickers and more, right here.