This 10.4% Dividend Will Plunge Under Biden (Sell Now)

With China handily beating the coronavirus while pretty well every other country struggles to contain it, you might be considering buying Chinese stocks now.

Unfortunately, such a move would be a mistake—especially if you’re lured by the siren song of the closed-end fund (CEF) I’ll name below. Because there’s a gathering storm that’s threatening the country’s stock market and economy, and few people are talking about it.

Funny thing is, despite all the so-called advantages China’s companies are supposed to have: lower operating costs and lower regulations among them, these stocks have never really delivered.

US Stocks Crush Their Chinese Counterparts 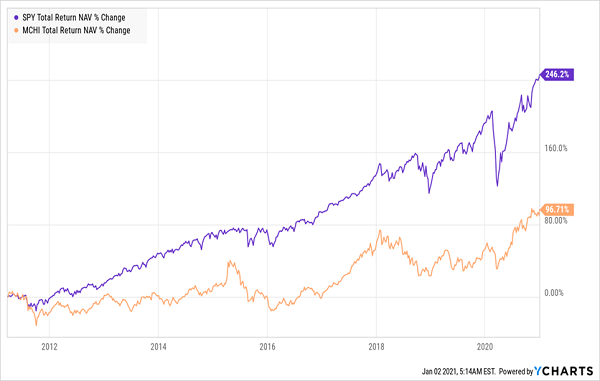 If you’d bought the iShares MSCI China ETF (MCHI), shown in orange above, which is a good proxy for Chinese stocks, 10 years ago, you’d have doubled your money. But you’d have more than tripled your investment by focusing on the household names of the S&P 500. Even the low-yielding SPDR S&P 500 ETF Trust (SPY), in purple, would have more than tripled their money and seen a lot less volatility along the way.

China Faces a Lot of Regulatory Risk—at Home and Abroad

Part of the problem with Chinese stocks today has been growing regulatory pressure, both inside and outside the country. Consider Jack Ma, CEO of Chinese Internet giant Alibaba Group Holding (BABA). Once a darling of China, Ma has faced growing scrutiny from the government for many reasons, causing Alibaba shares to trail the Chinese market.

Once a Darling, Now Crashing 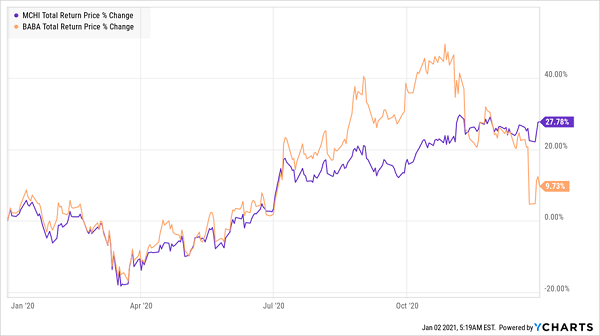 In America, too, growing scrutiny of Chinese firms’ dealings around the world have made it harder for many Chinese companies to list in the United States. And that scrutiny will ratchet up after President-Elect Joe Biden enters the White House.

That may surprise you, as President Trump has been synonymous with being tough on China. Pressure from Trump’s camp moved the New York Stock Exchange to delist China Mobile (CHL), China Telecom (CHA) and China Unicom Hong Kong (CHU). That’s $150 billion in market value that will find it harder to reach American investors, and it’s just the start.

Biden has already made it clear that, at least on China, his position doesn’t diverge from Trump’s as much as you might expect. He recently said he wants to “hold China’s government accountable for its abuses on trade, technology, human rights and other fronts,” adding that America’s “position will be much stronger when we build coalitions of like-minded partners and allies to make common cause with us in defense of our shared interests and values.”

In other words, Biden is aiming to build a coalition of countries to counter China on the economic front.

That is a tough political situation to invest against in the best of times, and in the early 2000s, one could have dismissed such proclamations by pointing to the fact that China’s lower regulations and operating costs meant Chinese companies were just too cheap for an investor to ignore. But China has tightened some regulations, and Chinese workers’ salaries have exploded since then (chart below is in Chinese yuan per year). 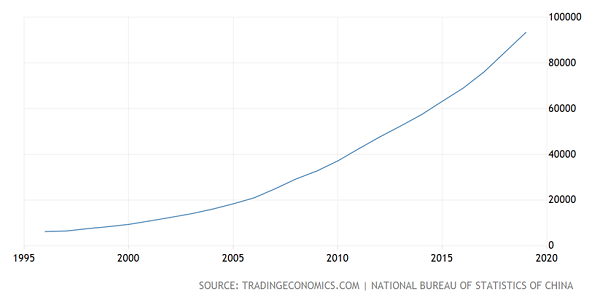 This chart shows us that Chinese wages rose a staggering 1,400% in the last 25 years! This means companies aren’t offshoring to China just for low costs anymore, and that means “reshoring” to America (or other countries) is a more affordable option. And we’ve seen divestment from Chinese vendors reach record levels in 2020, with more outflows to continue for the foreseeable future.

Combine the less attractive economic incentives to stay in China with the growing political hostility to the country in America and elsewhere, and there are many reasons why investors should flee Chinese stocks.

So if you own MCHI, it’s definitely time to sell, as well as any other ETF that invests in Chinese stocks.

And there’s another fund that a lot of investors looking to capitalize on China have poured into that lately, and you should avoid (or sell if you own it): the Morgan Stanley China A Share Fund (CAF), a CEF that gave investors a tremendous 10.4% dividend yield in 2020, thanks to a big special payout in December. That big yield makes the fund appealing to dividend hunters, and the fact that it trades at a 12.8% discount to net asset value (NAV, or the value of its portfolio) is also alluring, as it would seem to indicate upside ahead as that discount narrows.

But I urge you to ignore this siren call. CAF’s focus on Chinese stocks makes it a risky fund for a Joe Biden presidency, especially when there are high-yielding funds that get you similar yields while also being much better positioned for the direction the political winds are blowing.

The best news is that you don’t have to gamble on risky dividend payers like CAF to get the outsized payouts you need to fund your retirement dreams.

I’ve got 4 funds for you today that are a lot safer because they all focus on strong, household-name US stocks, bonds and real estate investment trusts (REITs) and pay a generous 8.7% payout, on average.

And bear in mind that 8.7% is just the average. The yield on the highest payer of this quartet tops out at 10%! Plus, all 4 of these exclusive picks trade at discounts that are well outside their historic norms. As those discounts vanish, they’ll propel these funds to serious upside. My preliminary forecasts are calling for 20%+ price upside, on average, from these funds.

And that’s in addition to their steady 8.1% dividend payouts!

I’ve named these funds in an exclusive special report I’m making available to the public today, and I want to make sure you don’t miss your chance to grab it. Go right here and I’ll give you a copy, which will reveal all the critical data on these 4 income plays: names, tickers, best-buy prices, complete dividend histories—the works.