Forget the 2018 market drop—because it’s handed us a golden opportunity to grab some double-digit “bounce-back” gains in as 2019 rolls out.

I’ll tell you why I’m so excited about the year ahead in a moment. Then I’ll give you eight cheap funds set to arc higher as we move through 2019.

The kicker? Not only are these eight funds poised for big gains in the next 12 months, they throw off incredible dividend yields up to 12.6%, too!

First, back to last year’s return, which came in at negative 6.1%, including dividends.

The first bit of good news here is that despite their decline, US stocks still led the rest of the world. And if you’re like most Americans, you invest most of your cash at home, so you likely sidestepped the 14.1% drop in emerging markets, say (going by the MSCI Emerging Markets Index), or the 12.6% decline in developed countries outside the US and Canada (according to the MSCI EAFE Index).

I know that might still be cold comfort, but I’m just getting started here.

For one, in the last decade, 2018 is the only year in which stocks have gone down, so if you’re a long-term investor, you’re still way ahead of the game.

We aren’t living through such a crazy bubble. While stocks did well in the five years leading up to 2018, they’re up just half what they were back in the late ’90s: 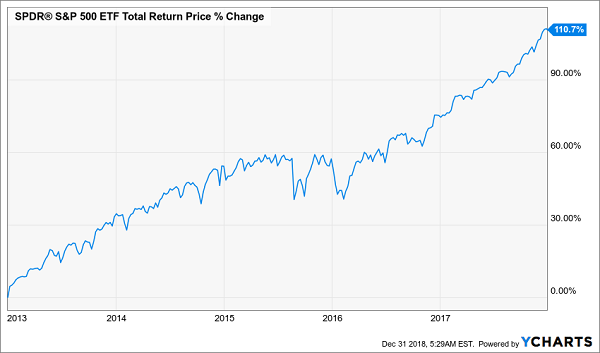 With a 16.1% annualized gain in the five years before 2018, stocks have roughly doubled their historical average rise. But a lot of that is because stocks were depressed from the prior five years. Add those five years in and the annualized return for the decade leading up to 2018 falls back to an annualized 9%—close to the market’s long-term average of about 7.5%.

Steady Gains Over the Long Term 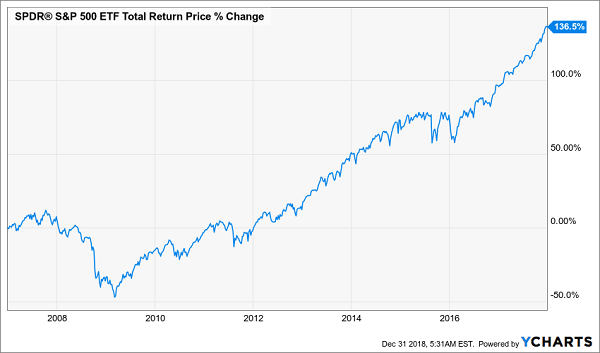 The bottom line: stocks are still in a healthy uptrend, but temporarily depressed, making now the perfect buying opportunity. But if you’re still not sure whether stocks are a good buy today, let me show you just one more thing (and then we’ll move on to those eight big yielders I mentioned off the top).

Thanks to last year’s crash in stock prices and a 20% year-over-year increase in earnings, the S&P 500’s P/E ratio has fallen to its lowest level since late 2015: 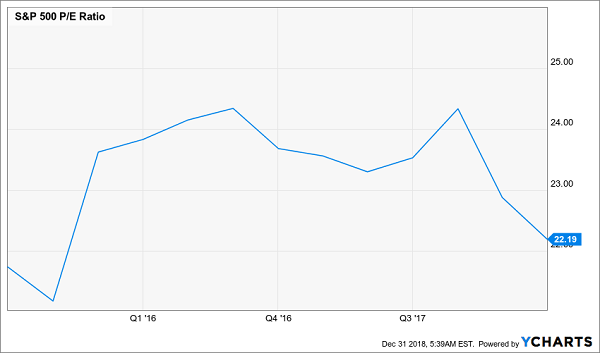 The lower price-to-earnings ratio is happening at the same time earnings growth is rising, and is far above where it was in the late ’90s, before the market collapsed:

What we’re seeing now isn’t a stock market bubble but the exact opposite. A bubble is when people overpay more and more for an asset relative to its earnings. But today people are paying less and less relative to earnings.

And that’s why it’s time to buy.

An Easy Way to Double Your Discount—and Your Upside

Since investors will soon realize their mistake in letting the market’s P/E ratio fall so far so fast, we can think of stocks as heavily discounted relative to their fair value.

And we can compound that discount by buying stocks through a closed-end fund (CEF).

If you’re unfamiliar with CEFs, they’re similar to ETFs in that you can buy them through any broker, and they trade on an exchange. This makes them very liquid while also providing instant diversification, since CEFs, like their ETF cousins, invest in hundreds of stocks at once.

One crucial difference is in their structure. Since CEFs can’t issue new shares to new investors after their IPO (ETFs, on the other hand, can), the market price of a CEF is determined by its total number of shares and not by the fundamental price of the assets the CEF holds (its net asset value, or NAV). As a result, many CEFs trade at a discount.

In fact, there are right now eight amazing CEFs that are ridiculously discounted thanks to recent market jitters.

But that’s not the only reason they’re amazing. In addition to giving you great stocks at a compounded discount, they also offer retirement-changing income streams of 9% or more without exposing you to risky high-yield assets like leveraged ETFs, energy royalties or other losing “sucker yield” schemes. 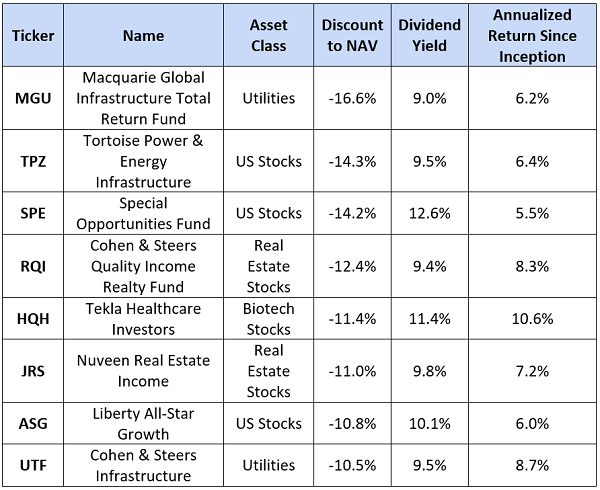 Note also that each of these funds has had an annualized return of 6%, on average, since their IPO, and some are well over 20 years old, having survived several market panics and upsets.

With such a track record and outsized dividend yields, you can’t expect these discounts to last for long—and if a new bullish appetite for stocks comes to dominate 2019, the discounts on these funds will likely vanish in a heartbeat.

My proven 52-point CEF-picking system just released its top 5 CEFs for you to buy in 2019—and if you want to maximize your upside (and your income) the time to buy these potent cash machines is NOW.

What makes my top 5 CEFs so special? If I had to point to just one thing, I’d say it’s the discount: my top 5 “must buy” CEFs for 2019 (which I’ll GIVE you when you click here) are so cheap that they’re set for 20%+ “snapback” gains in 2019, as their bizarre discounts to NAV (inevitably) come back to normal.

Growing Your Nest Egg—Securing Your Retirement

You see, my top 5 funds’ huge discounts also let us sleep well at night. Because if the market falls on its face this year—which, as I just mentioned, is the opposite of what I expect—these funds are already dirt-cheap, so they’ll have plenty of built-in downside protection … and we’ll still collect their 8% average dividends!

These are exactly the kinds of investments you need in times like this, when the Dow regularly gyrates 2% or more in a single day.