These 7%-8% Monthly Dividends Are on Sale!

One of the market’s most secure, steady sources of generous yield is going through a rare turbulent moment. But these 7% to 8% yields—paid monthly, no less!—are selling at discounted prices we only see once every five years or so.

Is it time for us contrarians to consider “backing up the truck” to load up on these monthly dividend machines?

Why “Preferred” Dividends are This Cheap

“Preferred” stocks are stock-bond hybrids that rarely make Wall Street’s highlight reels. We like it that way, because these funds pay.

These underappreciated secrets don’t usually suffer this bad, either.

You Rarely See Preferreds Get Clobbered This Bad 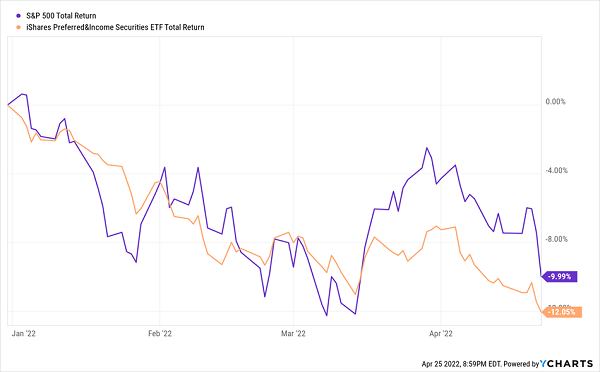 The reason preferreds are usually so steady is that they simply collect income. We have no quarterly earnings drama to worry about here.

Consider the start of earnings season over the past few weeks. We’ve had reports from the likes of Wells Fargo (WFC), JPMorgan Chase (JPM) and other blue-chip banks, and following those reports, the media talks about how WFC went in this direction, and JPM went in that direction.

The stocks they’re referring to are the companies’ “common” stocks—typical publicly traded shares that allow you to share in the company’s profits while typically getting a vote on board elections and other issues.

But what the media often overlooks—because there’s rarely as much to talk about—is these and other companies’ preferred stocks. They trade on exchanges just like common stocks, but they have a few other qualities that make them act differently. For instance, they’re bond-like in that they typically trade around par value, and their “dividends” more so act like bonds’ fixed coupon payments.

They also have some pretty cool attributes of their own:

However, many others can yield 7%, 8% and more—and in fact, that’s the case with these three preferred funds that offer monthly payouts and are currently trading at dirt-cheap valuations.

This closed-end fund (CEF) invests in a portfolio of preferred stocks that is at least 50% weighted in investment-grade debt (that’s at least BBB- for Fitch and S&P, and Baa3 for Moody’s). Currently, however, the portfolio is even higher-quality, with a little more than 60% in the BBB range, and all but 2% of the remainder in the highest range of junk (BB).

I mentioned a couple bank preferreds above. That’s because they’re the most commonly held type of preferred, and you can see that in JPC. Financials make up four of JPC’s top five industries: diversified banks (28%), insurance (14%), regional banks (13%) and capital markets (10%). Meanwhile, JPM, Wells, Citigroup (C) and Bank of America (BAC) are four of its biggest issuers (and Land O’ Lakes rounds out the top five).

Nuveen’s preferred fund also uses quite a bit of leverage—nearly 40% at last check. That makes itself known in three ways: 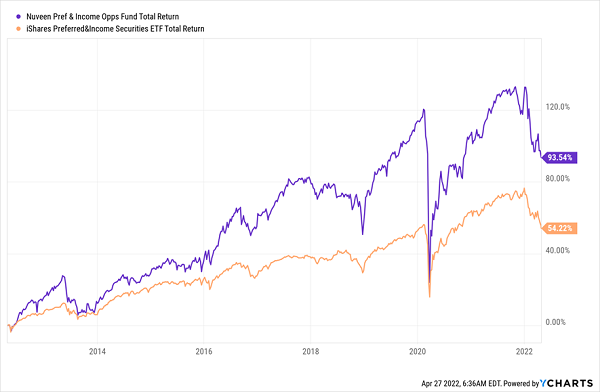 For one, using debt leverage to effectively “double down” on management’s best picks leads to a larger yield on its monthly dividend than a normal basket of these underlying yields would provide. It has also led to better returns over the long run than a basic preferred ETF.

That has come at the cost of higher volatility—which means admittedly sharper drawdowns in times of distress for preferreds, like this rare bout right now. But as a result, JPC is trading at a discount of nearly 9% to NAV, meaning you can buy its preferreds for 91 cents on the dollar. That’s a decidedly deeper discount than its five-year average of around 4%.

Cohen & Steers Limited Duration Preferred and Income Fund (LDP) is fairly unique in that, as the name suggests, it’s a “limited duration” fund. That is, the average duration fund is typically six years or less—in theory, helping cut down on interest-rate risk. At the moment, its duration is just 3.1 years, which is about half a year less than the aforementioned JPC.

But in this case, management has also gone with a more aggressive portfolio from a credit-quality standpoint. LDP has just 42% of its portfolio in investment-grade preferreds, with another 40% in higher-quality-junk BB issues. The remainder are B-rated or not rated at all. Cohen & Steers also uses quite a bit of leverage (32%).

That has kept performance largely in line with its Nuveen competitor of late.

That Is, Both Funds Have Disappointed 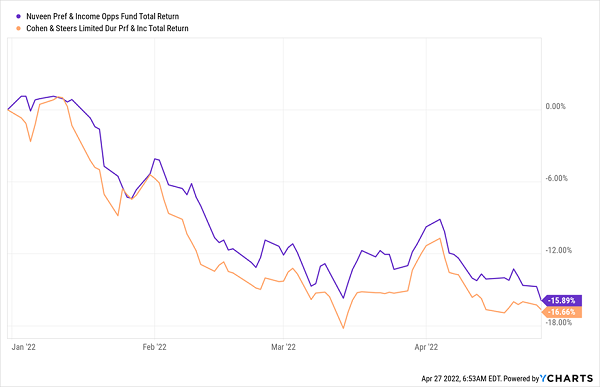 But again, that has driven the monthly-paying LDP to a plump 6%-plus discount for a fund that, over the past half-decade, has been on sale for only 2% on average.

John Hancock Preferred Income Fund II (HPF), another monthly payer, has a similar credit-quality makeup as the other two, but the nature of its underlying holdings have given it a small edge in 2022’s rout. 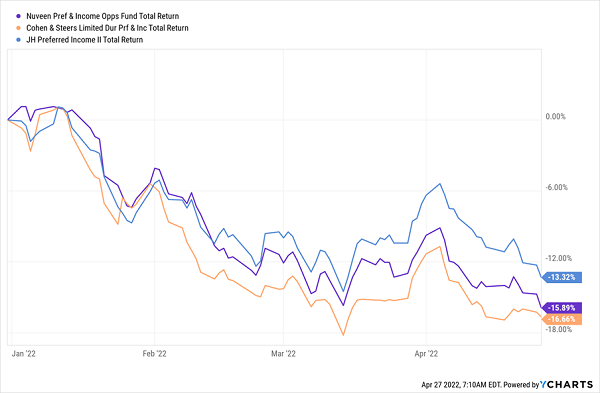 HPF sits right in the middle of the three, credit-wise, with a little more than half its holdings in investment-grade preferreds, and most of the rest in BB. It also uses a high amount of leverage (35%).

Where John Hancock’s fund differs, however, is that it’s more than just preferred stock.

Yes, preferreds are still in the spotlight, but at a little more than 60% of assets. However, about a third of its portfolio is invested in corporate debt. And HPF even holds a little government debt, and U.S. and international common stock.

That has helped cushion HPF a little bit so far this year, but even then, its declines have knocked it into decided value territory. Typically, if you had gone to buy John Hancock’s CEF sometime over the past five years, you would’ve paid a premium to NAV of about 2%. But at the moment, you can snap it up at a 2% discount.

So, Why Are Preferreds Getting Beaten Up?

Preferred stocks also share one other important trait with bonds—and it’s this trait that is causing a lot of pain in the space right now.

Think about it. Preferred stocks and bonds alike tend not to move up or down very much, meaning most of their worth is tied up in their yield. That’s why rising interest rates tend to impact bond and preferred prices—because of the “coupon competition” they provide. Income investors become impatient with their current holdings, which don’t look as good on a relative basis. They look elsewhere, and that selling lowers prices.

Your 2022 Guide to Retirement Riches: 7%-Yielding Blue Chips That Pay EVERY MONTH

That’s why I’m not high on preferreds—at least not right now with Jerome Powell and the Fed revealing an itch to hike rates fast.

Fortunately, I see better prospects for another group of rich 7%-plus yields with reliable monthly payouts.

My “7% Monthly Payer Portfolio” is a high-yield “A” squad: a group of diversified, reliable payers of mouth watering yet dependable income that don’t knuckle under every time the economy throws a fit.

Many of these picks leverage the power of steady-Eddie holdings to generate not just massive yields, but shockingly aggressive price performance.

Do the math: Even just a $500,000 nest egg—that’s less than half of what most financial gurus suggest you need to retire—invested in a portfolio with these kinds of yields now would kick-start a $35,000 annual income stream.